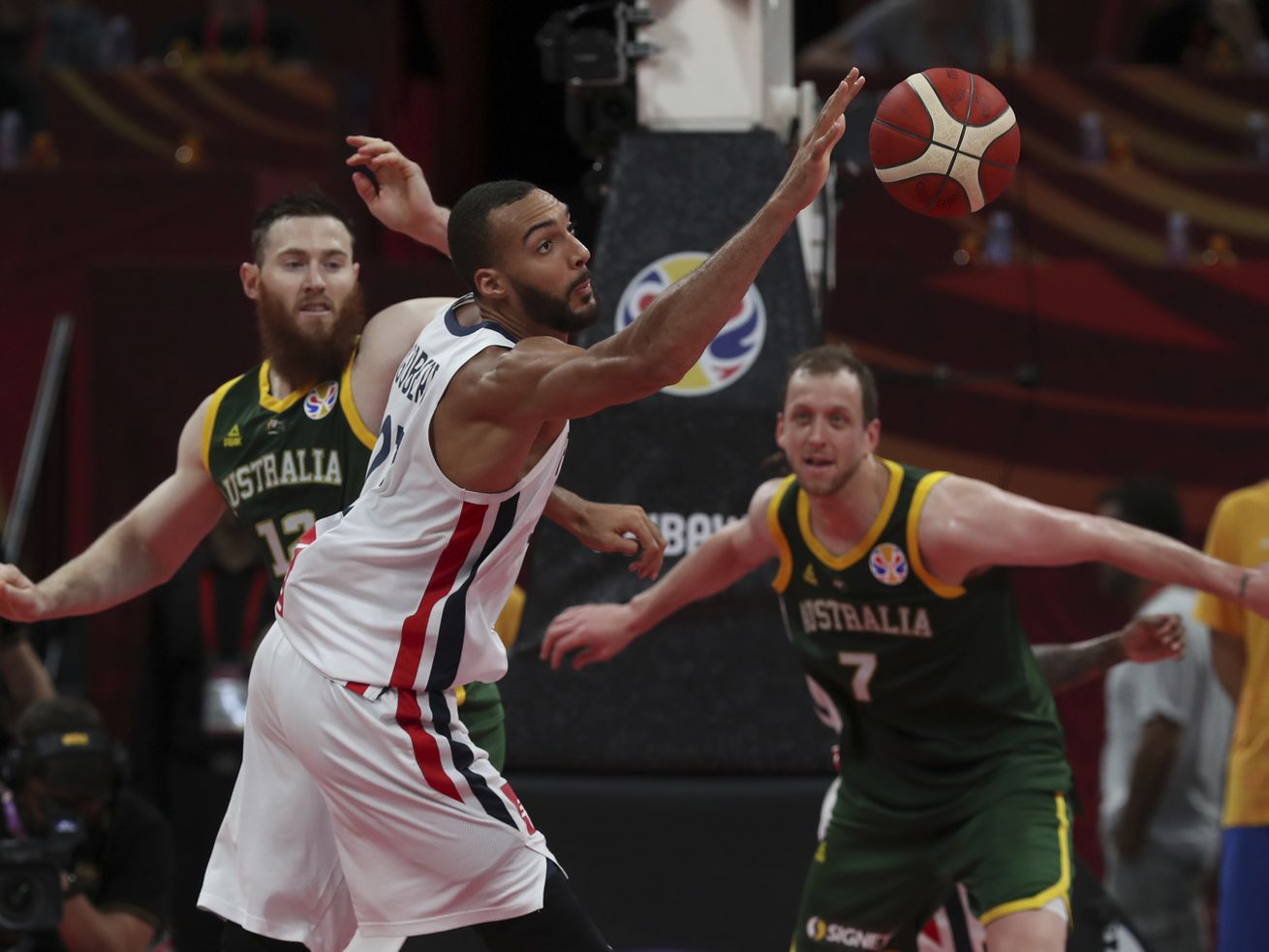 Rudy Gobert of France reaches for the ball over Aron Baynes, left, and Joe Ingles, right, of Australia during their third placing match for the FIBA Basketball World Cup at the Cadillac Arena in Beijing, Sunday, Sept. 15, 2019. Ingles and Gobert, teammates on the Utah Jazz, will lead their respective teams in the Tokyo Olympics. The Jazz’s Miye Oni will also be competing in the Games for Nigeria. | Ng Han Guan, Associated Press

The Jazz’s Rudy Gobert, Joe Ingles and Miye Oni will all be on stage at the Games — as will Weber State star Damian Lillard, who will be competing for Team USA

Beginning on July 25, the basketball hub of the world will be the Saitama Super Arena in Japan, where the entirety of the Olympic men’s and women’s basketball tournaments will be held and the Utah Jazz will be well represented right from the start.

Joe Ingles (Australia), Rudy Gobert (France) and Miye Oni (Nigeria) will all be competing to win their first Olympic medal. In fact, Australia and Nigeria have never won an Olympic medal for basketball, and though France has earned two silver medals in the sport, the last time was at the 2000 Sydney Games.

The biggest questions heading into the postponed 2020 Tokyo Games, of course, revolve around COVID-19 and how it will impact the competition and namely how it will impact Team USA. Consider this your Jazz-centered Olympic primer — what to know and who to watch.

Australia
John Locher, Associated Press
Australia’s Joe Ingles shoots over United States’ Keldon Johnson during an exhibition basketball game Monday, July 12, 2021, in Las Vegas. Ingles will be among a handful of NBA veterans competing for the Boomers at this year’s Games.

The Australian men’s national team, known as the Boomers, are widely considered to be the team with the best chance to challenge Team USA at the Olympics.

International basketball reporter Igor Curkovic surmises that most people will be pulling for the Aussies to medal in Tokyo, not only because of their star-studded roster but also because they’ve just narrowly missed it so recently.

“The entire world probably wants to see the Boomers climb the podium in Tokyo,” Curkovic writes. “Because they have been the sweethearts of the 2016 Rio Olympics, and the FIBA Basketball World Cup 2019 in China, yet they ended up in the fourth spot both times around.”

The Boomers won all three of their exhibition games against Argentina, Team USA and Nigeria, while training in Las Vegas, but their final friendly against Team USA was canceled when health and safety protocols prevented the U.S. side from competing.

On top of their near misses, much of …read more

Marvel Studios & Disney+ | SUPER BOWL 2021 | Promo
A breakdown of how the A’s will use Starling Marte, Josh Harrison and Yan Gomes
SHARES
ShareTweet