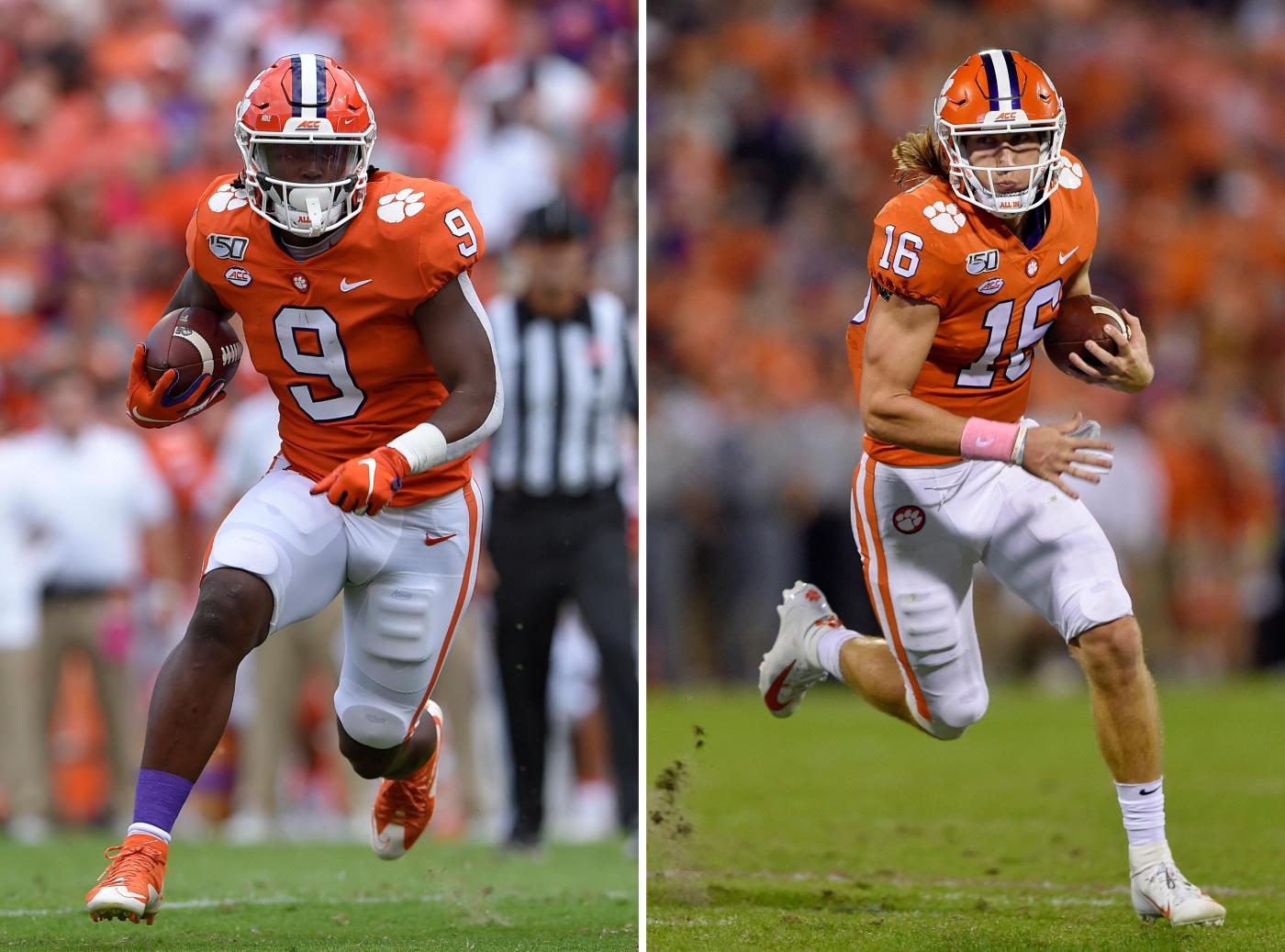 Clemson quarterback Trevor Lawrence and tailback Travis Etienne are doing their best to complement each other as teammates as they trample opponents.

They’re also giving Heisman Trophy voters plenty to think about down the road.

That could be evident whenever voters decide on college football’s biggest individual award with how well Lawrence and Etienne have opened up this year.

They have led the top-ranked Tigers to their sixth-consecutive 4-0 start, leading a relentless offensive juggernaut that’s outscored the opposition 168-53 so far.

Lawrence, the 6-foot-6 junior with the flowing hair and cannon arm, has completed 72% of his throws for 1,140 yards and 10 touchdowns. He has also gone 12 full games without throwing an interception, a streak of 355 passing attempts.

Etienne, the two-time defending Atlantic Coast Conference player of the year, has run for 392 yards and four TDs. He’s also second on the Tigers with 17 receptions.

Etienne set a college football record with a touchdown in a 39th game, breaking a tie with two others including past Heisman winner Tim Tebow of Florida.

Lawrence and Etienne have an easy-going connection that comes from wanting to win as much as possible and improve each time out, offensive coordinator Tony Elliott said.

“They want to do what’s required, they want the ball in their hands,” Elliott said. “But they also want their teammates to be successful.”

Etienne, a senior, arrived first as a goofy, gangly runner who got a scholarship offer late when another recruit went elsewhere. Etienne also had breakaway speed, but it took him time to develop the power moves he uses these days to escape tacklers for bigger gains.

Etienne was a considered a strong second-rounder in the last NFL draft, yet chose to return for a final college season both, he says, as a lesson to his younger brother, whose name is Trevor, about staying the course and improving his skills as a pass catcher when he turns pro next season.

“I’m glad I could be the example,” Travis Etienne said.

Lawrence entered as a five-star heir apparent to Clemson’s national championship QB Deshaun Watson. After four games as backup his freshman year in 2018, Lawrence was elevated to starter and has gone 29-1 since including winning the national title his first season. The lone loss was to LSU in last year’s championship game.

For Lawrence the LSU defeat reminded him how much it hurt to lose and led him to dig in more to improve during an offseason of uncertainty and opt-outs due to COVID-19.

He’s grateful he’s had the opportunity to befriend and play with Etienne, who continually amazes the quarterback with what he does.

There are several instances of teammates vying with each other for the Heisman: on 14 occasions two players from the same school finished in the top five in voting The last time was last year as Ohio State quarterback Justin Fields was third and Buckeyes defensive …read more