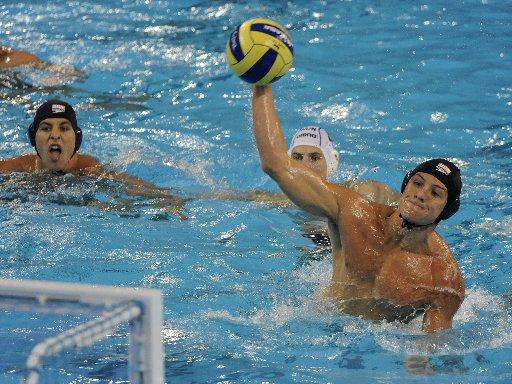 A  return-to-sports campaign spearheaded by high school football coaches and players’ parents has led to an offshoot group in water polo, a quintessential Californian sport where Olympic stars have joined forces with the kids.

“In a sport like water polo, no one is thinking about us,” five-time Olympian Tony Azevedo said Wednesday. “We’re far from what the governor or anyone is worried about.”

The campaign began with five teammates at Sacred Heart Prep in Atherton, said the school’s Griffen Price, one of the country’s most promising goalkeepers.

Price, 17, said teammate Gavin West helped start a petition two weeks ago on change.org urging the wife of Gov. Gavin Newsom to support their cause.  Jennifer Siebel Newsom was a three-sport high school athlete in Marin who had a promising youth soccer career. More than 1,800 had signed the petition by Wednesday evening.

For much of the year lobbying efforts by high school football coaches and parents have kept the pressure on Gov. Newsom and leaders of California’s public health department to change their guidelines when it came to high school sports.

On Feb. 8, the water polo group sent Gov. Newsom a letter that it later posted on its website.

Some of the letter’s key points:

— Indoor youth water polo tournaments in Utah and Texas this winter with 5,000 athletes reported no transmissions.

— The effect of chlorine is not limited to the water. Droplets and gas disinfect the surface of the water column, according to the British Sports Medicine Journal and National Institute of Health.

“In water polo, you jump into ‘hand sanitizer’ with the chlorine before you play,” Azevedo said.

“The broad national and international evidence—and our own experience—demonstrates that COVID-19 is very rarely if ever, transmitted in the pool,” said Everist, a two-time Olympian who has coached the Golden Bears since 2002.

Azevedo, 39, runs a water polo youth academy from Long Beach and does clinics around the country, including one last week at Foothill High School in Pleasanton.

He said he became concerned with players’ inability to train during the COVID-19 pandemic that has altered almost every aspect of American life.

As he watched water polo continue in other states and Europe, Azevedo said he questioned how the California rules were decided.

“The guidelines they were giving us were like someone made something up while drinking tequila,” he said. “You can pass but not shoot? That doesn’t make sense.”

Azevedo said water polo is such a niche sport that its future is threatened by the shutdown.

“We’re losing coaches,” he said. “Now we’re going to find ourselves a smaller sport and even farther behind the rest …read more