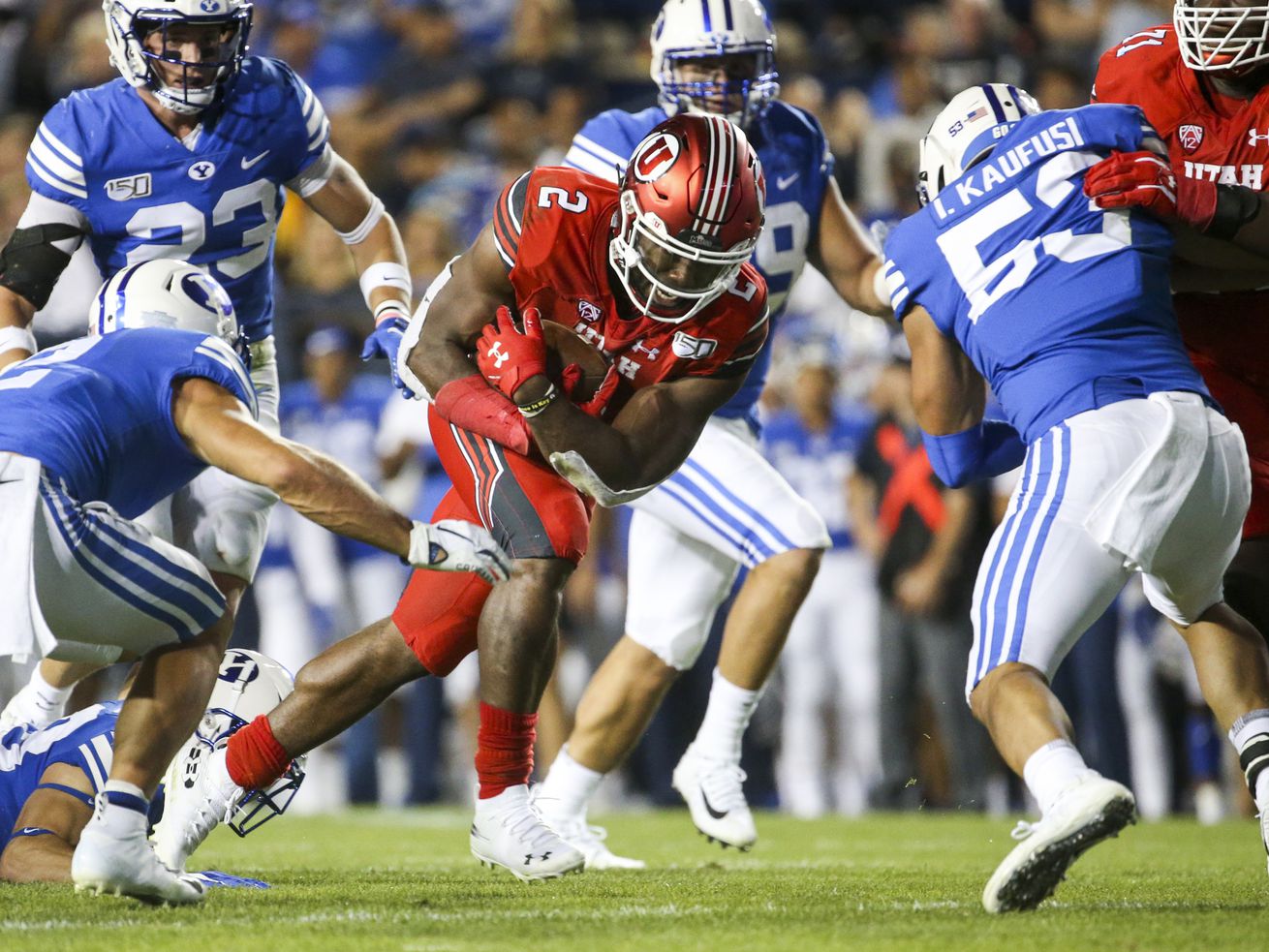 Utah running back Zack Moss (2) runs the ball near the goal line during the Utah-BYU football game at LaVell Edwards Stadium in Provo on Thursday, Aug. 29, 2019. Could Utah or BYU be affected if Texas and Oklahoma move to the SEC? | Colter Peterson, Deseret News

The subject that gets college sports fans riled up perhaps unlike any other is back after a bombshell report from the Houston Chronicle’s Brent Zwerneman Wednesday said that both the Texas Longhorns and Oklahoma Sooners “have reached out” to the SEC about membership.

Numerous national outlets rather quickly confirmed the report, and indications right now are that things could move quickly in terms of the two schools getting and accepting invitations to the conference, even if it’s a while before they would actually start competing in it.

And with that, fans around the country are now in a frenzy trying to figure out if “their team” could be impacted, for conference realignment really never affects just a few schools. The ripple effects could be very wide, especially with huge programs such as Texas and Oklahoma potentially on the move.

It’s certainly within the realm of possibility that those ripples could reach the BYU Cougars and Utah Utes. As an independent in football (let’s be clear here — all sports at a university are impacted in realignment, but football drives the discussions), there’s seemingly always talk that BYU would be a prime candidate to fill a conference spot somewhere, and the ripples within the Power Five conferences could be especially big, meaning Utah as a member of the Pac-12 could be impacted.

Here’s a breakdown of some of the possibilities that could await the two Beehive State schools if Texas and Oklahoma do in fact go to the SEC. Note that nothing has been reported regarding these things happening. They are just possibilities that logic dictates could happen.

BYU, Utah both get calls from the Big 12

Look, there’s no denying that both Texas and Oklahoma leaving for the SEC would be a gargantuan blow to the Big 12, and even that is probably understating it pretty significantly. The Longhorns and Sooners bring in the most money to the conference, and any replacement schools would be there just to try to salvage something.

That said, if the Big 12 takes the approach that it wants to try to remain relevant, surely its leaders will call other Power Five and strong Group of Five schools in its general geographic region to see if they want to join.

If the Longhorns and Sooners were to leave the conference, there would be three teams from Texas (Baylor, TCU, Texas Tech), two from Kansas (Kansas and Kansas State) and Oklahoma State, Iowa State and West Virginia.

Both BYU and Utah could certainly be strong candidates.

Things obviously didn’t materialize for BYU the last time talks apparently got serious about it joining the Big 12 in 2016. Things haven’t changed for the university in regard to its Honor Code, which …read more