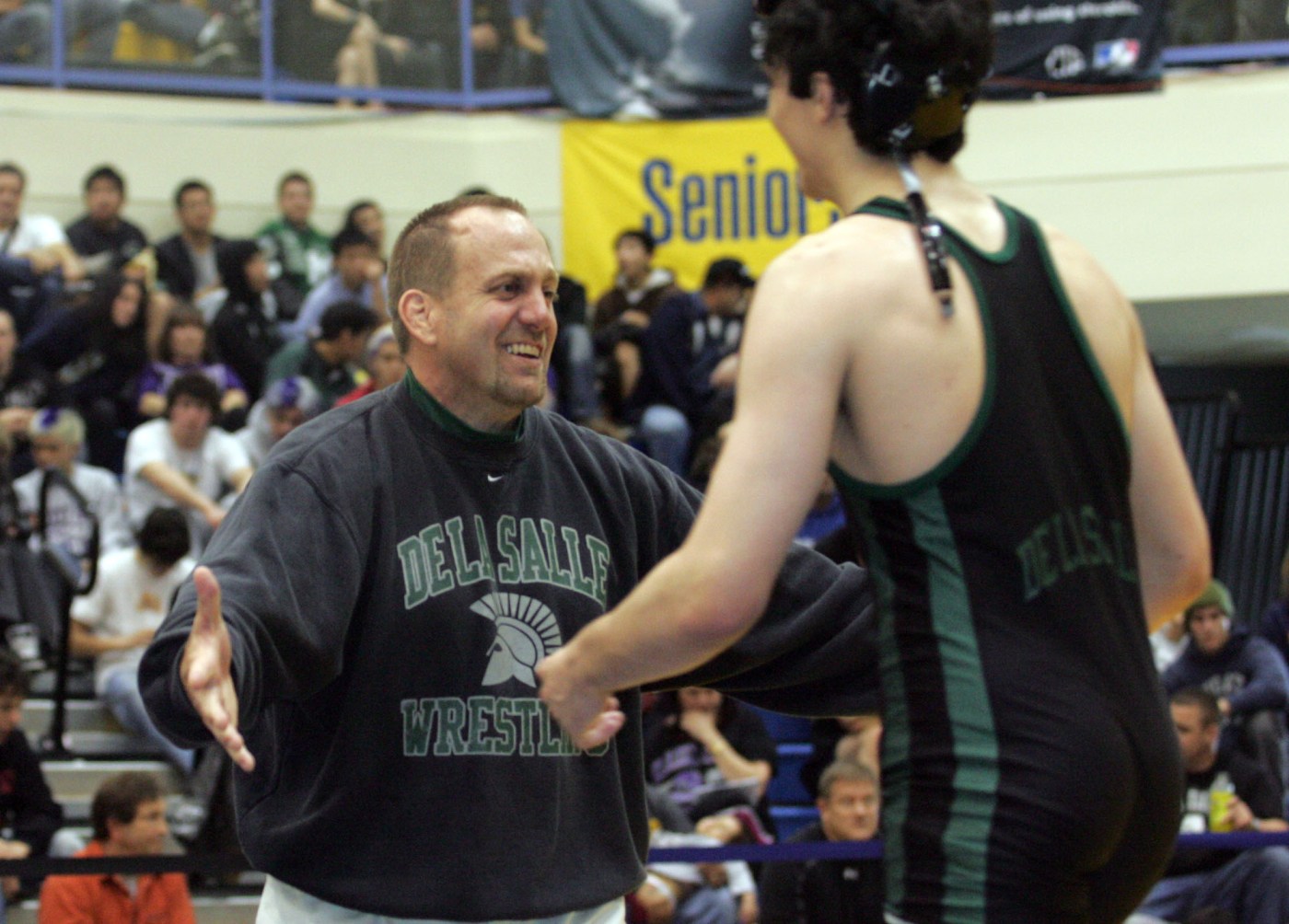 De La Salle High School wrestling coach Mark Halvorson, who led the program to numerous championships over the past two decades and also was an elite Greco-Roman coach, has died, a school official confirmed Wednesday. He was 57.

The cause of death was a heart attack, De La Salle athletic director Leo Lopoz said.

Halvorson, who died Monday, coached De La Salle to 11 of the past 12 North Coast Section championships, including six in a row. Over that stretch, he had 90 state-meet qualifiers, 23 medalists and two state champions, according to the California Wrestler.

But to De La Salle, Halvorson was more than a highly successful coach.

“Ultimately, despite his accomplishments and awards and championships, what Mark Halvorson meant to our student-athletes and our community will be sorely missed,” Lopoz said. “He brought the attributes of just a living, caring person and always wanting to make himself available.

“Wrestling is a tireless sport for coaches. State wrestling is like five days. His unselfish behavior for others cannot be matched. He did things that other coaches just couldn’t or wouldn’t do and the sacrifices he made for others resulted in the love and admiration that is flowing from all of the student-athletes and coaches of the past couple of decades.”

Halvorson also was an acclaimed Greco-Roman coach, at the Community Youth Center in Concord and on the international stage. According to the California Wrestler website, he coached at four senior-level world championships and also was one of four Greco-Roman coaches on the U.S. team at the Rio Games in 2016.

How did rookies with Utah ties stack up in their first NFL seasons?

“Mark was a ‘Scientist’ to the upper echelon of USA Wrestling and international competition,” Michael Cho wrote in California Wrestler, “a ‘Coach’ and ‘Father Figure’ to countless kids, a worthy ‘Rival’ to CA’s best high schools, a ‘Friend’ to all those involved in the CA/national wrestling community, and an ‘Ambassador’ around the world for the sport he loved.”

When De La Salle won its sixth consecutive NCS championship nearly one year ago, Halvorson led a young group of wrestlers to the top. Only two of the team’s seven finalists were seniors.

“The kids came through,” Halvorson said.

“The success he had in his arena is truly incredible,” Alumbaugh said in a text message. ” And the kids loved him and respected him — which is exactly what you want from a coach. A funny, yearly moment I’ll miss is his sales pitch to me to get all my football guys out to wrestle. What was hilarious is he didn’t have to pitch me but still did every year. ‘Coach I need more heavyweights!!!!’”