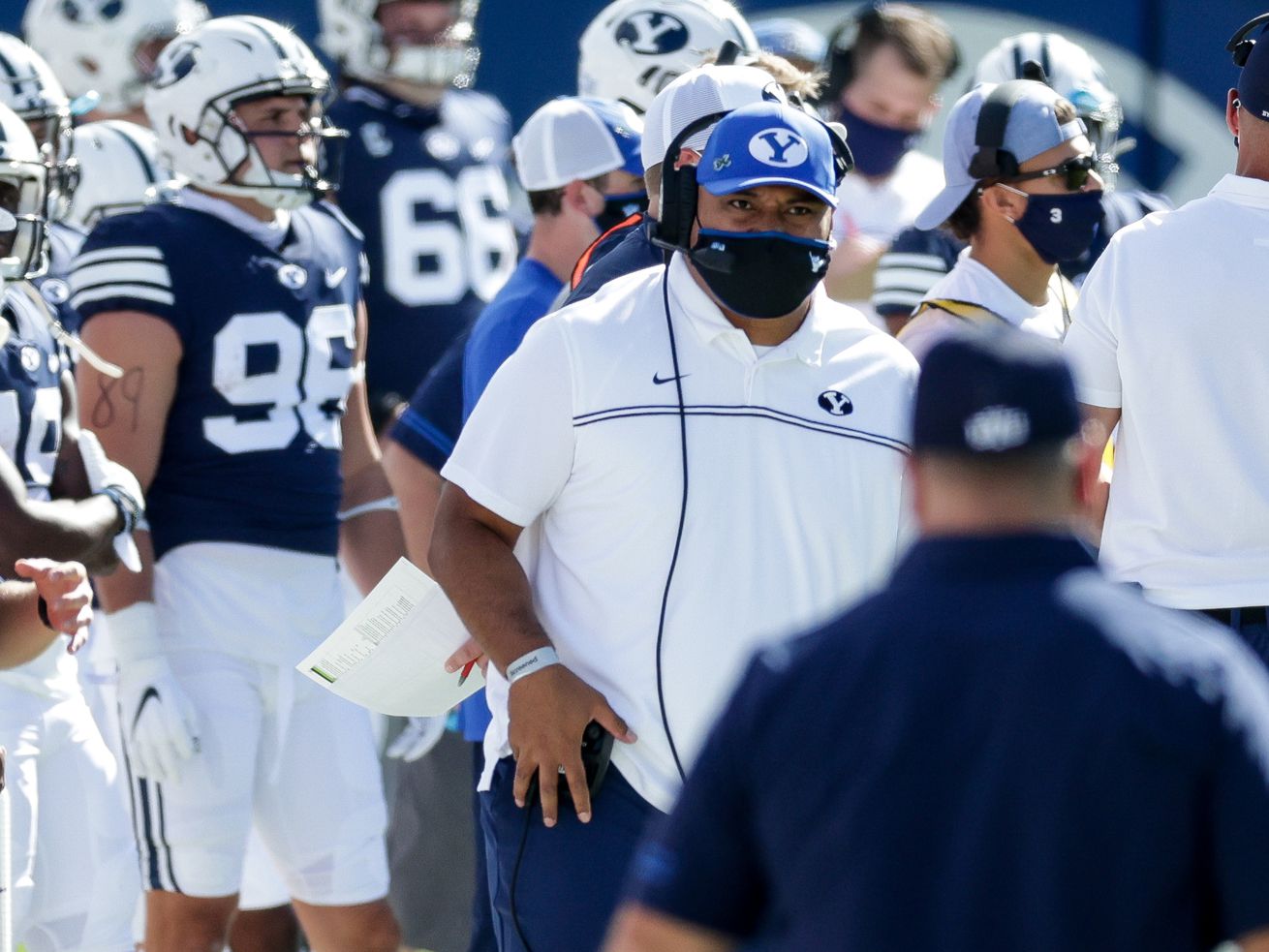 BYU coach Kalani Sitake works the sideline during the game against the UTSA Roadrunners at LaVell Edwards Stadium in Provo on Saturday, Oct. 10, 2020. The Cougars escaped with a narrow win over the 34-point underdogs. | Spenser Heaps, Deseret News

For a program starved for national recognition after being there in the ’80s and ’90s, BYU can’t afford to let it slip away with lackluster performances witnessed in narrow victory over UTSA

PROVO — So, BYU climbed in the college football polls, even after a lackluster performance.

That is news Blue and White fans should be giddy about.

That is also a good time for Kalani Sitake and his players to think for a moment and appreciate the experience of being a ranked football team, knocking on the door of a top-10 ranking.

And that’s why you don’t play sloppy like you did Saturday against UTSA, a five-touchdown underdog.

BYU was lucky to be able to learn something in its narrow victory.

And that’s exactly why we didn’t see a lot of dancing on the sideline last week. Either consciously or subconsciously, the truth was there.

On Monday, national pundit for The Athletic, Stewart Mandel, wrote, “Sorry I got ahead of myself on BYU, everybody. Let’s pump the brakes on the undefeated talk for a bit after Zach Wilson and the Cougars sleepwalked to a 27-20 win against 34.5-point underdog UTSA.”

Keeler: Why Broncos have a shot at the playoffs, and nobody should apologize for beating a bad Bill Belichick team

Mandel had been on BYU’s train for a month, but dropped them several spots this week.

Here are three things for the Cougars to contemplate in preparing for a road game at Houston this Friday:

First, college football polls are not scientific, but opinions from sports desk jockeys and overworked coaches tasked with the job of deciding who is good and who is not. Some voters may have just woken up from a late game night or were busy preparing for travel when they meet a vote deadline. Some do a lot of research, others may occasionally be lazy and just mail it in. Voters reflect our society, they’re not any different nor more perfect. In reality, it’s not accurate nor absolute, but it is what we have to attach importance to concerning wins and losses. It creates a pecking order, a reference point.

Second, we’ve made polls matter as a society. And because they matter, when you are ranked, you don’t wade through a ranking with a crown of pride and take it for granted. And if you are BYU, and you’d experienced a No. 1 ranking a very long time ago — and have not been so fortunate to even be ranked regularly as of late — you should play like it. Protect it. Don’t disrespect a ranking because the pressure on ranked teams increases exponentially every week. You wear a target.