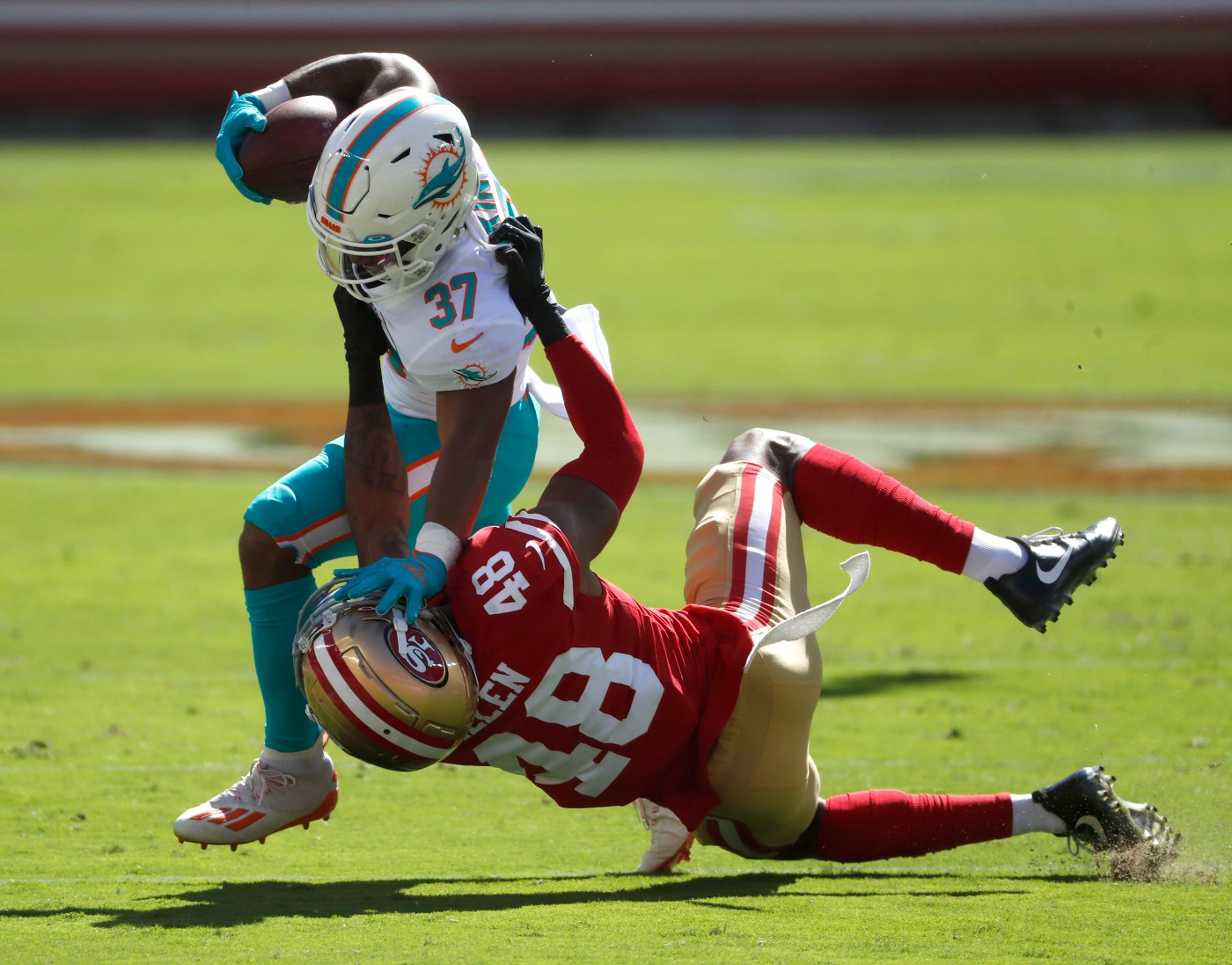 A fourth-string cornerback, in his 49ers debut, kept staking the Miami Dolphins to yards and points.

The franchise quarterback, on a tender ankle, kept getting hit and became an interception machine.

By the time Brian Allen and Jimmy Garoppolo got pulled, too much damage was done to avert one of the 49ers’ most embarrassing losses under coach Kyle Shanahan, a 43-17 faceplant to the underdog Miami Dolphins.

The 49ers (2-3) are winless in three home games, with the Los Angeles Rams (4-1) coming to Levi’s Stadium next Sunday night.

This loss should rattle the 49ers to their core like none other since Shanahan arrived in 2017. No visitor to Levi’s Stadium had scored as much as the Dolphins (2-3).

The defending NFC champion can’t win at home, it can’t play defense without a viable pass rush, and not even a full-strength offense could help Garoppolo avoid a career-worst 15.7 passer rating in his premature return from a high-ankle sprain.

With a 30-7 halftime deficit in place, Garoppolo got yanked in favor of C.J. Beathard.

More stunning was how lifeless, confused and swagger-less the 49ers looked in their response. They had wobbled amid so much adversity the past month. The Dolphins merely tipped over their wounded opponent.

Here are the highs, lows and all you need to know:

A Sept. 20 ankle injury kept Garoppolo out the past 2 1/2 games. And a 23-point halftime deficit got him out of this game, coach Kyle Shanahan making the move to “protect” Garoppolo.

Because Nick Mullens’ turnover trifecta keyed last Sunday night’s loss to the Philadelphia Eagles, the 49ers counted on Garoppolo to rescue them from their demise, as if this was December 2017 all over again.

A week’s worth of practice did not ease his transition. His high-ankle sprain surely contributed to his poor passing (7-of-17 for 77 yards with two interceptions and a 15.7 rating).

What the 49ers do next Sunday is anyone’s guess, more so than last week’s charade of “Garoppolo, Mullens, or Beathard”.

Before his horrible first half was done, Garoppolo floated two passes toward midfield that produced the first interceptions off him this season. The first was a 20-yard heave toward Jerick McKinnon, and the next was a 25-yarder toward Deebo Samuel.

One of the caveats for Garoppolo’s clearance to play was whether he could protect himself. He got sacked three times before halftime. His offensive line did not help in that regard. Actually, the first two sacks were on his linemen (Trent Williams, then Laken Tomlinson/Ben Garland) before a devastating, blind-side hit on a sack allowed by tight end Ross Dwelley.

CORNERBACK CRISIS: Fitzpatrick immediately attacked a 49ers cornerback crew missing its injured starters, and Allen made for easy prey his debut as a practice-squad callup.

He gave up a 47-yard catch …read more