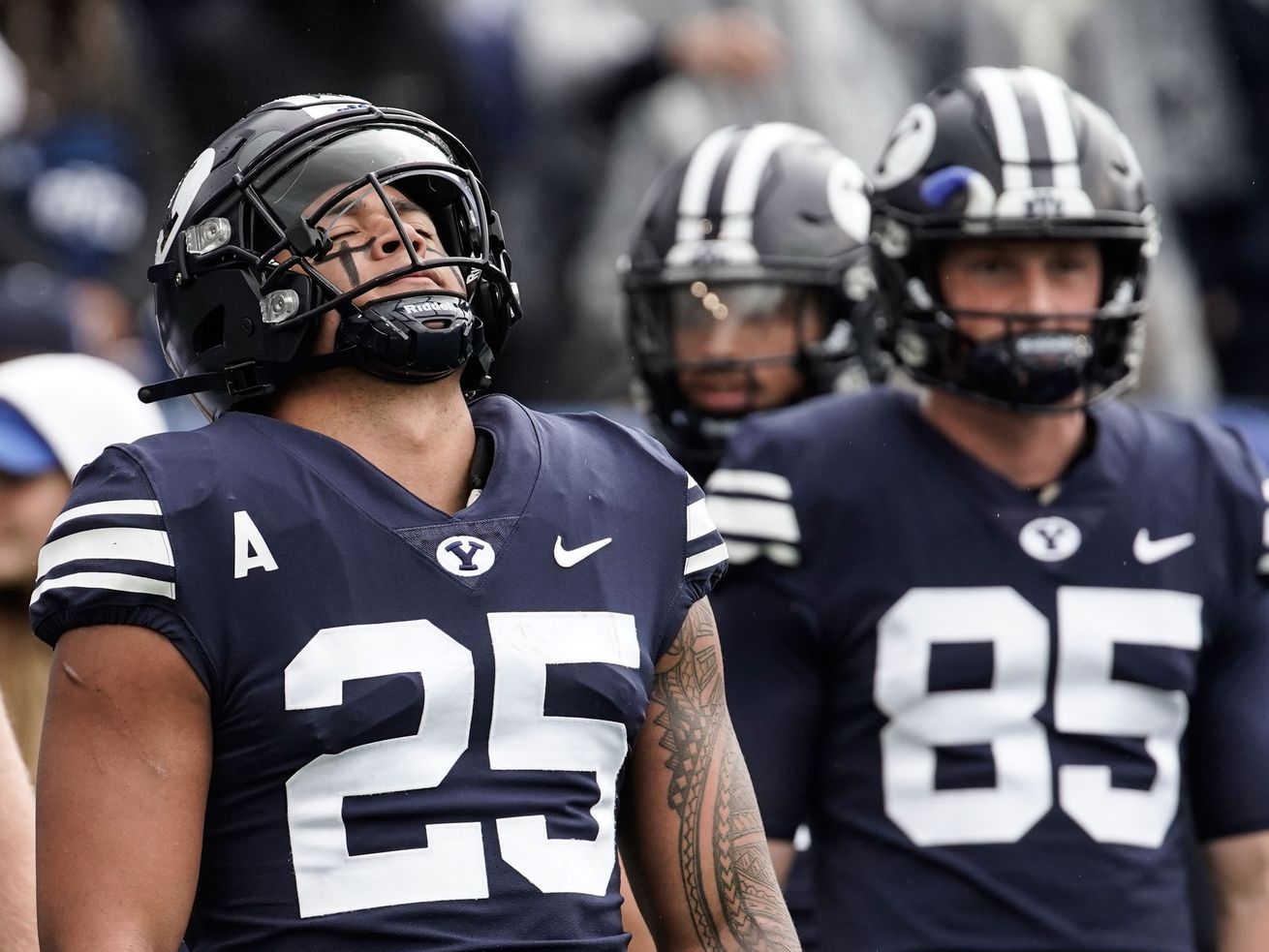 BYU running back Tyler Allgeier (25) close his his eyes before a college football game against Boise State at LaVell Edwards Stadium in Provo on Saturday, Oct. 9, 2021. | Shafkat Anowar, Deseret News

For BYU, which was riding high until loss to Boise State, it could be tough sledding in the weeks ahead

BYU is coming off a loss to Boise State that no one saw coming, but now is no time to panic.

On second thought, go ahead and panic.

The Cougars face Baylor and Virginia in the next three weeks — both games pitting them against their former coaches — sandwiched around a road trip to Washington State, a team that doesn’t scare anyone, but neither did Boise State. The trip to Baylor looked like a trap even before the loss to Boise State.

Suddenly, a season that began so perfectly — five wins in five games, a No. 10 national ranking — has a real chance of turning, well, mundane. The Cougs could wind up in one of those bowl games named after mortgage companies or potatoes. They fell nine spots in the polls after last week’s loss. Another loss and … they’re out of there.

This is a turning point in the season.

Let’s be honest. The Cougars won their first five games, and yet something seemed a little off. The Boise State game showed how thin the margin is.

The Cougars have been scrappy and resourceful, finding ways to win, until they didn’t. But they couldn’t put away Arizona handily, a team that is winless in five games, including a matchup against FCS Northern Arizona. The 24-16 loss to BYU is the team’s closest in four games against FBS schools. The game against Utah turned on a fourth-down play. The win over Arizona State turned on a single defensive play. The game against South Florida — a team with one win this year — was decided by a mere eight points.

Living on the edge finally caught up with the Cougars in the loss to Boise State, which entered the game 2-3 and had lost to Nevada a week earlier by 10 points.

Everyone is pointing to the four turnovers in that game — three fumbles and an interception — but equally distressing was the 140 yards rushing. The Broncos averaged only 3.1 yards per attempt but they were able to get first downs and control the ball, winning the possession battle by more than seven minutes. Boise State ranks last in the Mountain West Conference in rushing even after the BYU performance. BYU had been strong in the trenches this season until that night.

Now BYU faces a Baylor team that is 5-1, having beaten Kansas State 45-7, Iowa State 31-29 and West Virginia 45-20. The lone loss was a 24-14 decision at 12th-ranked Oklahoma State. The Baylor offense is overseen by new offensive coordinator Jeff Grimes, who held the same position at BYU the last three seasons. One of his assistants is Eric Mateos, who …read more