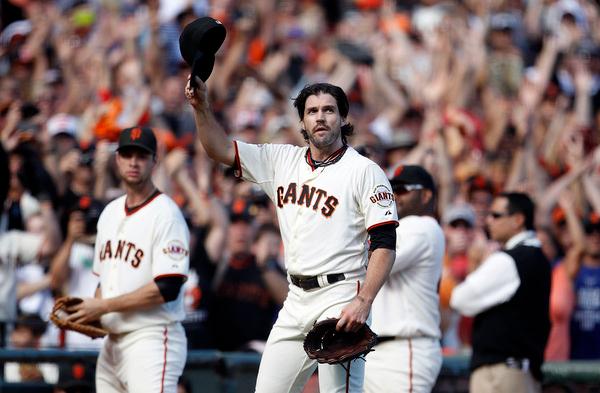 A pair of pitchers who enjoyed some of the best years of their careers with the Oakland A’s and won World Series with the San Francisco Giants are making their debuts on the 2021 Baseball Writers Association of America Hall of Fame ballot.

Right-hander Tim Hudson and lefty Barry Zito are among 11 newcomers to this year’s ballot, which also includes former Oakland A’s standouts Dan Haren and Nick Swisher. Fourteen others including former Giants MVPs Barry Bonds and Jeff Kent as well as former Giants shortstop Omar Vizquel are back on the ballot this year after receiving at least five percent of the overall vote in 2020.

Hudson won 222 games over a 17-year major league career in which he was named to four All-Star teams and finished among the top six in Cy Young voting four times. Hudson never won the Cy Young Award, but finished as high as second in 2000, his first full year with the A’s after placing fifth in 1999 Rookie of the Year voting.

Zito’s contract was largely viewed as an albatross until 2012, when the southpaw tossed 7 2/3 shutout innings in Game 5 of the NLCS against the St. Louis Cardinals in an elimination game. After helping spark the Giants’ comeback in the series, Zito returned to the mound and won Game 1 of the World Series with 5 2/3 innings of one-run ball against the Detroit Tigers.

Zito won two World Series rings with the Giants even though he was left off the playoff roster and did not pitch in 2010 while Hudson earned the only title of his career in 2014. The right-hander celebrated his 38th birthday at the 2014 All-Star Game and started Game 7 of the World Series against the Kansas City Royals.

Hudson only lasted 1 2/3 innings in his final career postseason appearance, but Madison Bumgarner famously finished the job for the Giants with five shutout innings in relief.

Like Zito and Hudson, Swisher was drafted by the A’s and spent the early portion of his career in Oakland before cashing in with a big contract elsewhere. The Ohio State product played 12 major league seasons including four with the A’s and finished sixth in Rookie of the Year voting in 2006.

The 2021 Hall of Fame ballot marks the ninth time Bonds will appear and comes after he received 60.7% of the vote in 2020, his highest share to date. A former player can appear on the ballot …read more