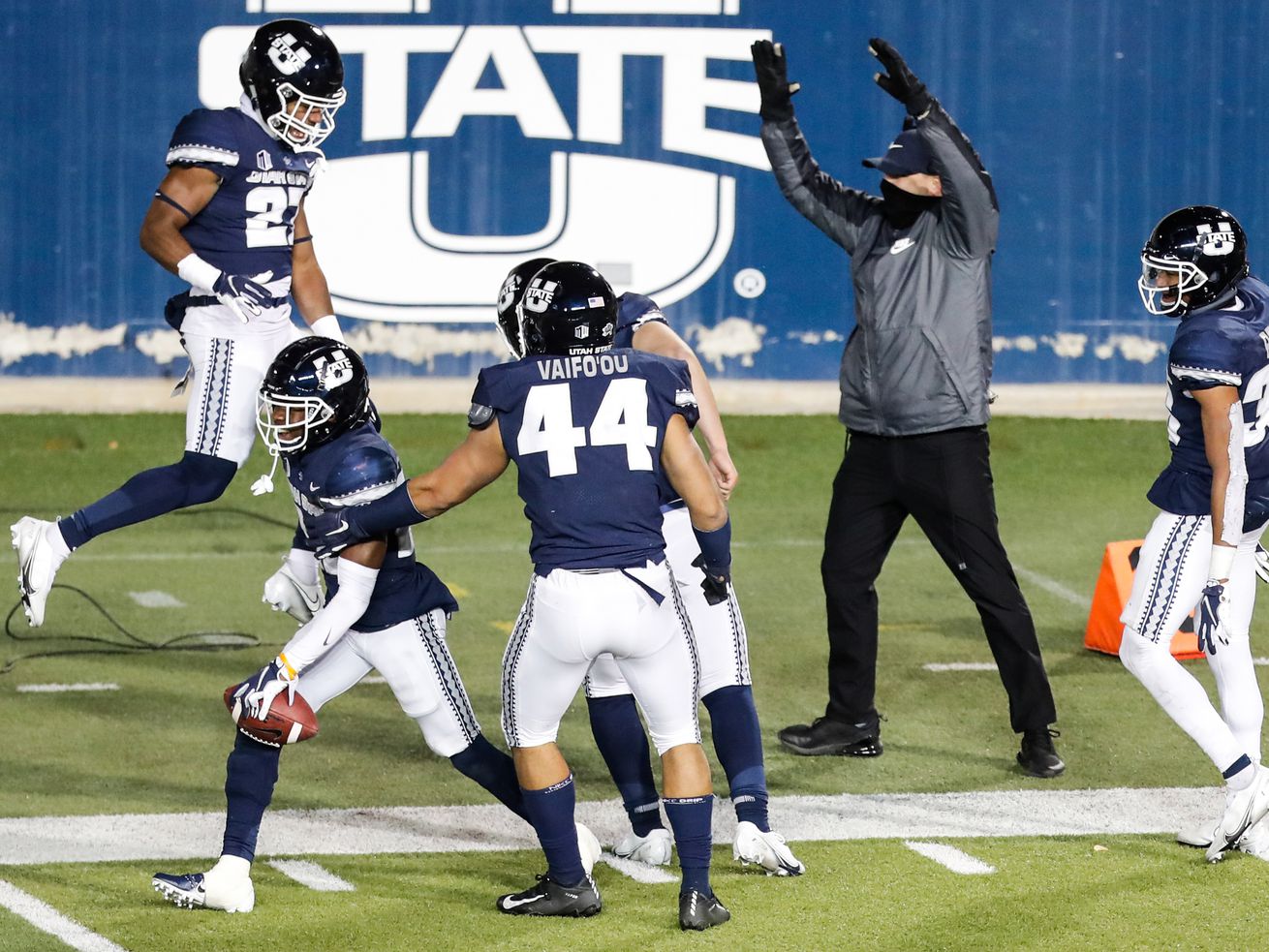 Utah State Aggies players celebrate after Utah State Aggies cornerback Michael Anyanwu (22) returns a fumble for a touchdown during an NCAA football game at Maverik Stadium in Logan on Thursday, Nov. 26, 2020. The play was then called back due to an incomplete pass. | Yukai Peng, Deseret News

There is no such thing as an offseason, and for head coach Blake Anderson and company, finding the next batch of Aggies is always a priority.

With that in mind, here is a look at Utah State’s 2022 recruiting class, with prospects listed according to reporting by 247 Sports, Rivals and the Deseret News.

(All commitments at this point are verbal and non-binding.)

Rated the 32nd-best prospect in Utah and the 125-best running back in the country, per 247 Sports, Alford chose the Aggies over offers from Air Force, Colorado State and Navy, among others.

As a junior last season, Alford rushed for 1,020 yards and seven touchdowns according to the Deseret News statistical database, and added 30 receptions, 448 receiving yards and two touchdowns.

Alford was expected to be a key contributor again for the Miners, as they moved up to the 5A classification, but he suffered season-ending injury in a season opening defeat against Wasatch.

Alofipo chose the Aggies over an offer from Northern Arizona, amidst interest (no scholarship offer) from Arizona, Arizona State and BYU. Formerly of Wood Cross High School, Alofipo is rated the 17th-best player in Nevada and the 119th-best safety prospect in the country.

As a Wildcat in 2019-20, he racked up 35 tackles and two interceptions (tied for the second-most on the team).

Rated the 24th-best prospect in Utah, per 247 Sports’ composite rating, and the 146th-rated offensive tackle prospect in the country, Aloisio chose the Aggies over an offer from Nebraska. Sporting a 5.5 rating on Rivals (0.8315 on 247 Sports) Aloisio helped the T-Birds to a 7-5 record and a berth in the 5A state championship game as a junior.

An all-purpose running back out of southeastern Texas, Briggs was offered by the Aggies on April 11, visited Logan on June 23 and committed on June 25. Per 247 Sports, Briggs was Texas District 12-4A-II Offensive Newcomer of the Year as a freshman in 2018, was a Texas 12-4A-II first-team All-District selection at both running back and returner as a sophomore in 2019, and was Texas District 12-4A-II Utility Player of the Year as a junior in 2020.