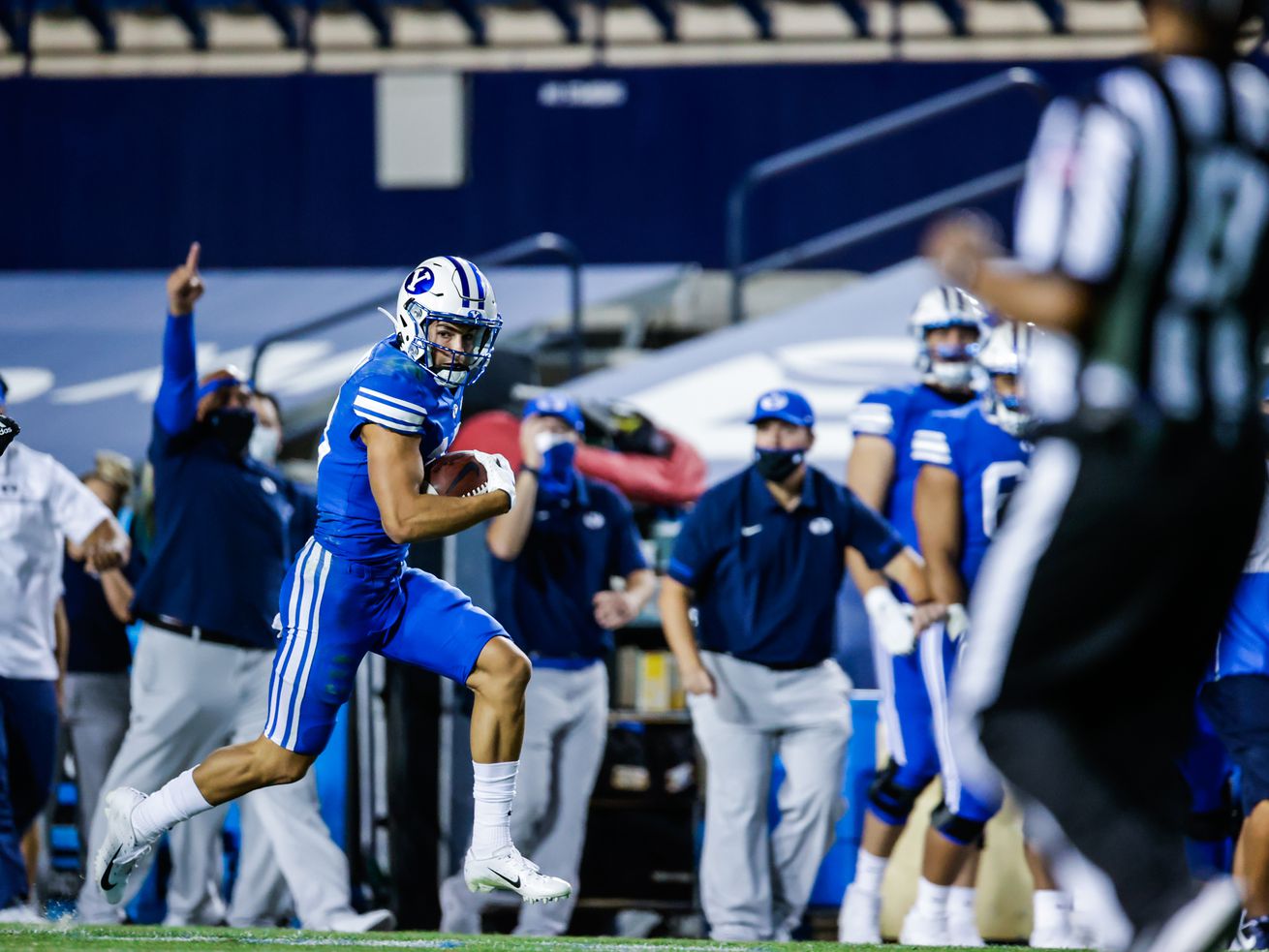 BYU receiver Gunner Romney, shown here against Troy on Sept. 26, 2020, was the Cougars’ second-leading receiver in terms of receiving yardage (767) last season and will return for his senior year in 2021. | BYU photo

New BYU passing game coordinator Fesi Sitake, who remains the Cougars’ receivers coach, has had to replace some star pass-catchers before.

So, when Sitake got news that Bushman and BYU’s most prolific receiver during its 11-1 season, junior Dax Milne, were turning pro, he didn’t break into a cold sweat.

“We are going to miss Dax (Milne). I am so happy for him. He had an unbelievable season. But as it has been here for awhile, it is ‘next man up,’ and see how they can roll.” — BYU receivers coach and passing game coordinator Fesi Sitake

“Losing Dax, we lose a lot of production,” Sitake said last week via Zoom when his new role was announced. “But we lost way more last year, with Micah, Aleva and Talon leaving. And other guys were able to step up. I feel like we can do the same thing again.”

Milne’s story about turning down scholarship offers at smaller schools so he could walk on at BYU has been well-documented. After catching just 31 passes for 354 yards and three touchdowns combined his first two seasons playing behind the aforementioned terrific trio, he became a candidate for the Burlsworth Trophy (top former walk-on) in 2020 by making 70 catches for 1,188 yards and eight TDs his junior season.

“We are going to miss Dax,” Sitake said. “I am so happy for him. He had an unbelievable season. But as it has been here for a while, it is ‘next man up,’ and see how they can roll.”

Two proven receivers return: seniors Neil Pau’u and Gunner Romney, who got off to a hot start and was one of the nation’s leaders in yards per catch before injuries slowed him down significantly. Pau’u was second in receptions with 45 and third in receiving yards with 603, while Romney was second in receiving yards with 767 and third in receptions with 39.

BYU receiver Dax Milne was named a semifinalists for the 2020 Biletnikoff Award on Monday by The Tallahassee Quarterback Club Foundation.

“So Neil and Gunner are definitely the staples, moving forward,” Sitake said. “And through spring and summer training and fall camp, we will see who emerges as that solid third (receiver) and see which other guys might be able to rotate in.”

For top candidates for the two-deep, look first at the …read more