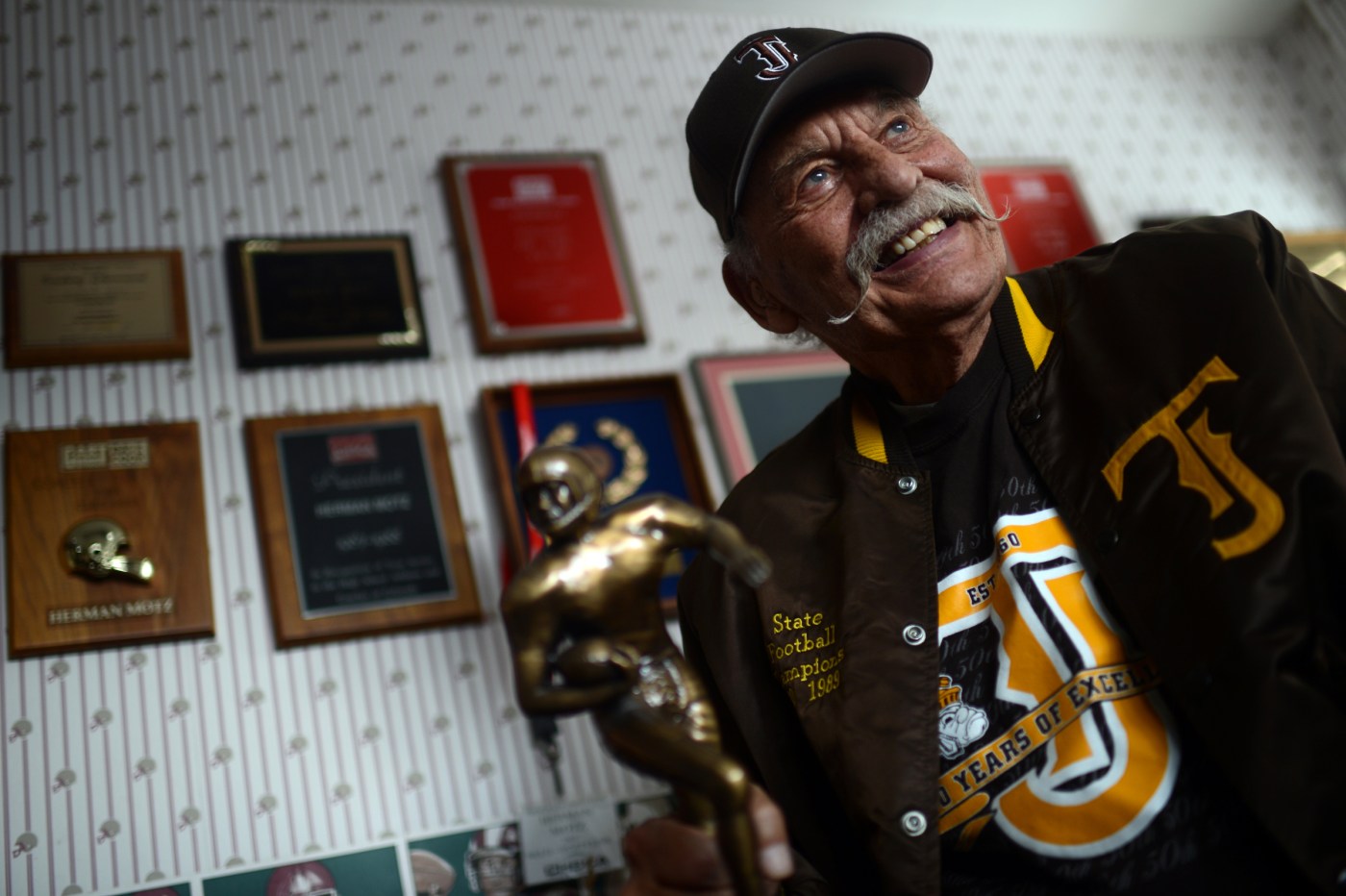 Motz, a big, animated man who wore a handlebar mustache, is a hall of fame member of the Colorado High School Activities Association, Denver Public Schools, Colorado High School Coaches, and Thomas Jefferson High School. He’s the last coach to win a state championship with a Denver Prep League team. His Spartans won the state title in 1980 and 1989.

At TJ, Motz taught English and Latin, and he was the track team coach. He was with Denver Public Schools for 35 years.

“He was a hero and a mentor for me,” said Eric Black, quarterback of the 1980 championship team. “He was the first Renaissance man I ever ran into.”

Black, who became a lifelong friend to “Coach,” described Motz as an “intellectual,” a mischievous man who had a “twinkle in his eyes. There was an energy about him, a warm positive energy that would uplift everyone in the room.”

“It was a huge celebration, more than a thousand people came,” Kendra Black recalled. “He touched so many lives in a really positive way as a teacher and coach.”

Born Sept. 8, 1929, in Cincinnati, Ohio, Motz graduated from Xavier University, where he played fullback and tight end for the Musketeers, in 1953. After college, Motz entered the Army and was stationed at Fort Carson when he met Patricia “Trish” Mikus, a nurse in training, on a blind date in August 1955. The couple were married on June 16, 1956.

3 BYU starting defensive linemen are moving on. How will coaches fill their shoes?

A romantic, Motz wrote poetry, including Latin verses, for the annual Winter Solstice. His wife, Trish, was the recipient of many love poems. Motz wrote songs, played guitar and sang, and he was a fan of classical music, especially Mozart. An artist, he painted and drew sketches, including caricatures.

“He had so many skills, I could call him up and ask him any question about any subject, he usually knew the answer,” said his son, Andy Motz. “As far as somebody to reach out to, he was always there.”

Andy Motz, who played high school football at East High School, helped his father as an assistant coach during the last five years of Herman Motz’s coaching career, which ended with 1989 championship.

“He was a gentle giant, but he could get excited on the football field and he got people’s attention,” Andy Motz recalled. “He was much more concerned about making good men than he was about wining football games.”

From 1976 to 1989, Motz record as head football coach at TJ was 135-30-1. His Spartans won the Denver Prep League title nine times and made six trips to the state semifinals.

“He was a gentleman’s coach. He ran clean and efficient programs, and his impact on young …read more