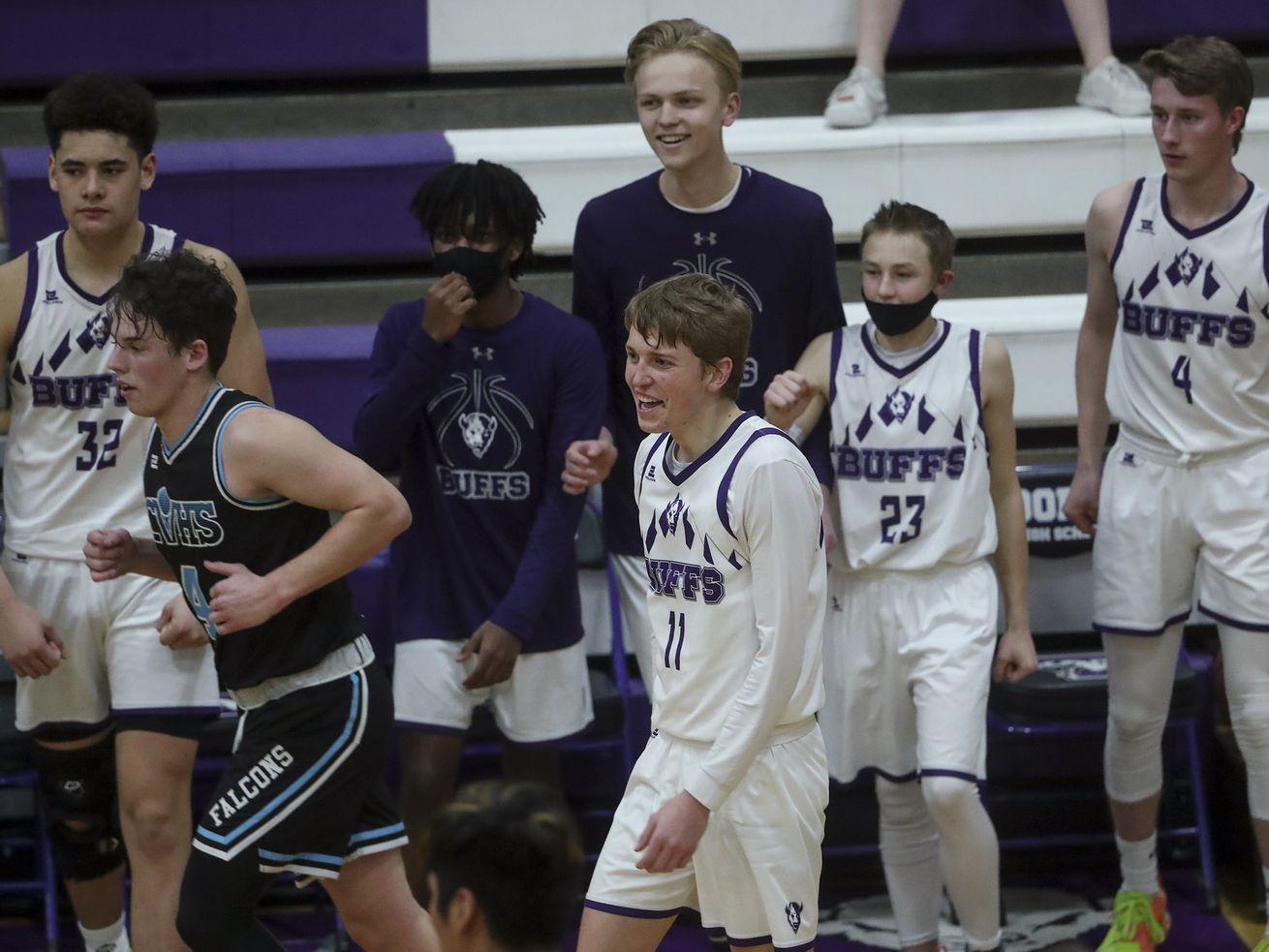 Tooele’s McCade Laughlin smiles after he nailed a 3-pointer to end the third quarter during the first round game against Canyon View during the 4A basketball tournament at Tooele High School on Tuesday, Feb. 23, 2021. | Steve Griffin, Deseret NewsBox Score

One of the very first things Tooele coach Jed Thomas told his players in prepping for Tuesday’s 4A first round playoff game was to ignore the record of their opponent.

Sure, No. 19 seed Canyon View only won two games all season and just once in Region 9, but it played the best teams in 4A night in and night out in the southern Utah region and wouldn’t be nervous at all about a road game at No. 14 Tooele.

“A team that sees competition like that on a nightly basis is a team that’s ready to play,” said Thomas. “If they played in our region they’d probably have six or seven or eight wins on the year.”

Tooele’s players took their coaches words to heart and buckled down defensively most of the night on its way to the convincing 52-36 victory to advance to the 4A second round.

Tooele will next travel to face No. 3 seed Crimson Cliffs on Friday, where it will be a big underdog against the co-Region 9 runners-up.

“We’re definitely going to have to hit shots. Crimson’s good. I don’t think we’re going to shoot them out of the gym, but if we can get stops and also hit a couple shots ourselves I think we’ll have a chance,” said Tooele’s Justin Rogers, who led all scorers with 24 points.

Tooele came into the game on a three-game losing streak to close region play, which likely cost it a top 12 seed, but Rogers wasn’t worried about momentum.

“He is all in for the team and that’s probably the most unique characteristic. A lot of kids with that kind of athleticism and talent would be more about me, but he’s all about the team and he cares about nothing else but the team. That’s pretty special.” — Tooele head coach Jed Thomas on Justin Rogers

Even though his team lost at Uintah 64-61 in overtime to end the season, it outscored the Utes 38-20 in the second half to force overtime in the first place.

“I was pretty confident. We had that comeback against Uintah and we didn’t end up with the win, but I feel like that gave us momentum coming into the game,” said Rogers.

The Falcons actually were the sharper team in the first quarter, taking an early 11-9 lead, but at the end of the quarter Thomas challenge his team to step things up on the defensive end.

“They kind of took it personally and went out and played really hard defensively and forced some turnovers and did some really good things,” said Thomas.

Tooele outscored Canyon View 18-5 in the second quarter to take a double-digit lead into halftime.

Neither offense was very productive in the third quarter, which allowed Canyon View to hang around and keep things somewhat …read more