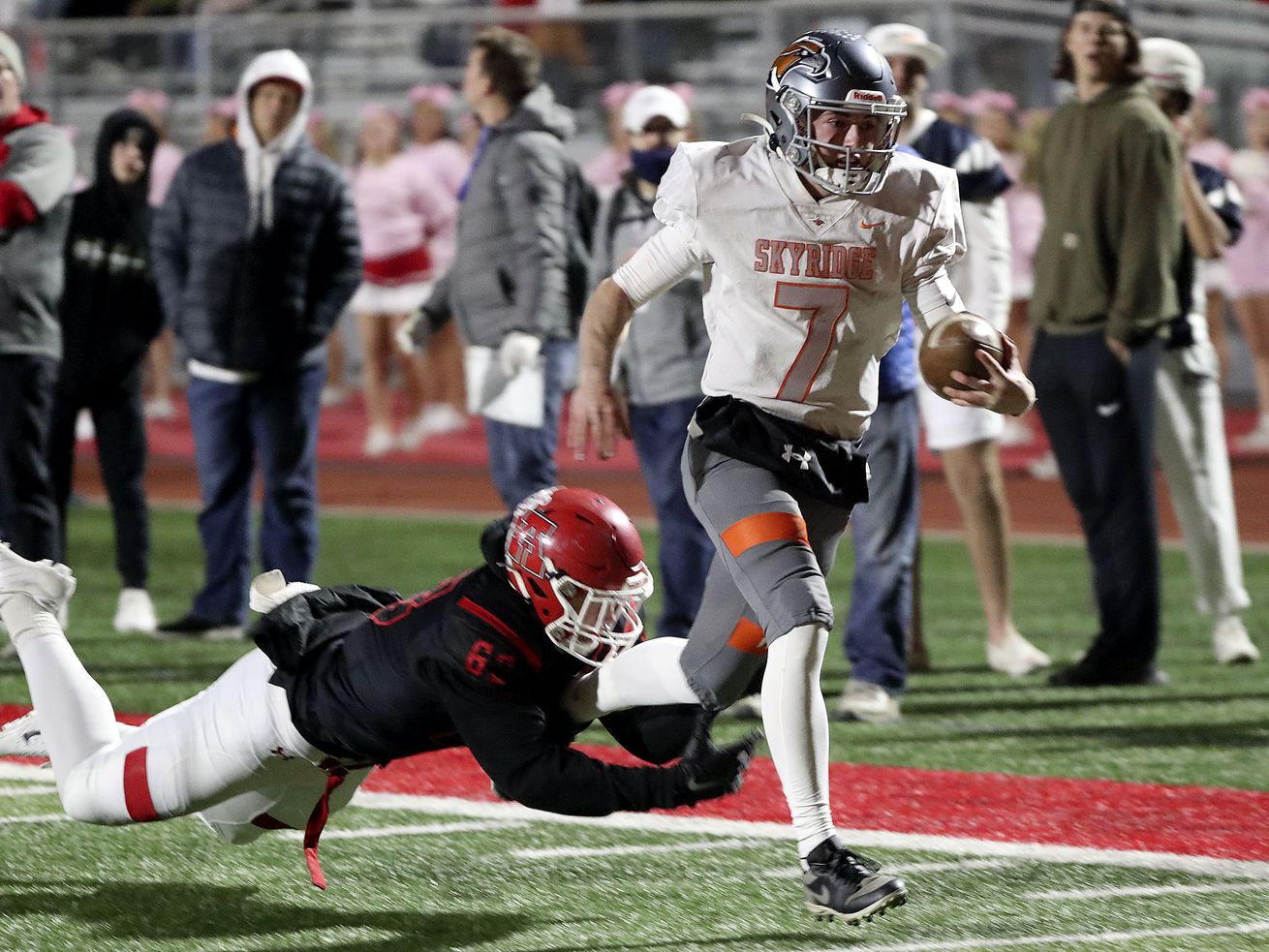 The 2021 regular season came to a close for American Fork and Skyridge Wednesday night in a rare midweek matchup. The pre-fall break meeting between the two Region 4 schools ended in a 42-22 victory for the visiting Falcons.

Skyridge leaned heavily on junior quarterback McCae Hillstead to pick up the win.

“I thought McCae Hillstead was sharp as he can possibly be; run game, pass game, just really being comfortable and in control,” Falcon head coach Jon Lehman said. “Even down to the end and just managing clock situations, I thought he was really sharp tonight. I’m really proud of him.”

The Falcon’s first drive stalled out on a failed fourth-and-one from the American Fork 32-yard line. The Caveman quickly capitalized on their defense’s stand. American Fork drove its way down the field, converting on a fourth down inside the red zone, before finally scoring on a Maddux Madsen 5-yard touchdown pass to Trey Roberts. The Cavemen took advantage of a Skyridge offside penalty, scoring on a 2-point conversion and jumping out to an early 8-0 lead.

That was when Hillstead took the game over, putting on a show as he rushed for three touchdowns and threw for two more. He helped his team get on the board with a 40-yard touchdown scamper, weaving through traffic before racing down the sideline for the score.

After a Cavemen three-and-out, Hillstead engineered another Falcon touchdown drive that ended in a pass to Jack Hadfield for 16 yards and the score. Skyridge would never look back, taking a 21-8 advantage into the half and leading the rest of the way.

Hillstead talked about the Falcons’ rebound to start the game. “When we get started like that, we don’t get down when we have our pitfalls. We stay up. The whole night on the sideline everyone was keeping great energy,” he said. “Even when we were up, we were always keeping great energy and just doing a great job of keeping ourselves motivated. I think that was a big part (of our win), and it didn’t stop the whole night.”

“I thought McCae Hillstead was sharp as he can possibly be; run game, pass game, just really being comfortable and in control.” — Skyridge coach Jon Lehman

Skyridge’s energy could be seen on the playing field as well, as Hillstead helped his team keep American Fork at bay. The Cavemen never came within striking distance of the Falcons’ lead in the second half, with Hillstead and company keeping their distance and a two possession lead the entire second half.

“McCae Hillstead is dynamite,” Lehman said. “When you’ve got McCae and his ability to run and throw and the character he has and the toughness he has and decision making, good things happen.”