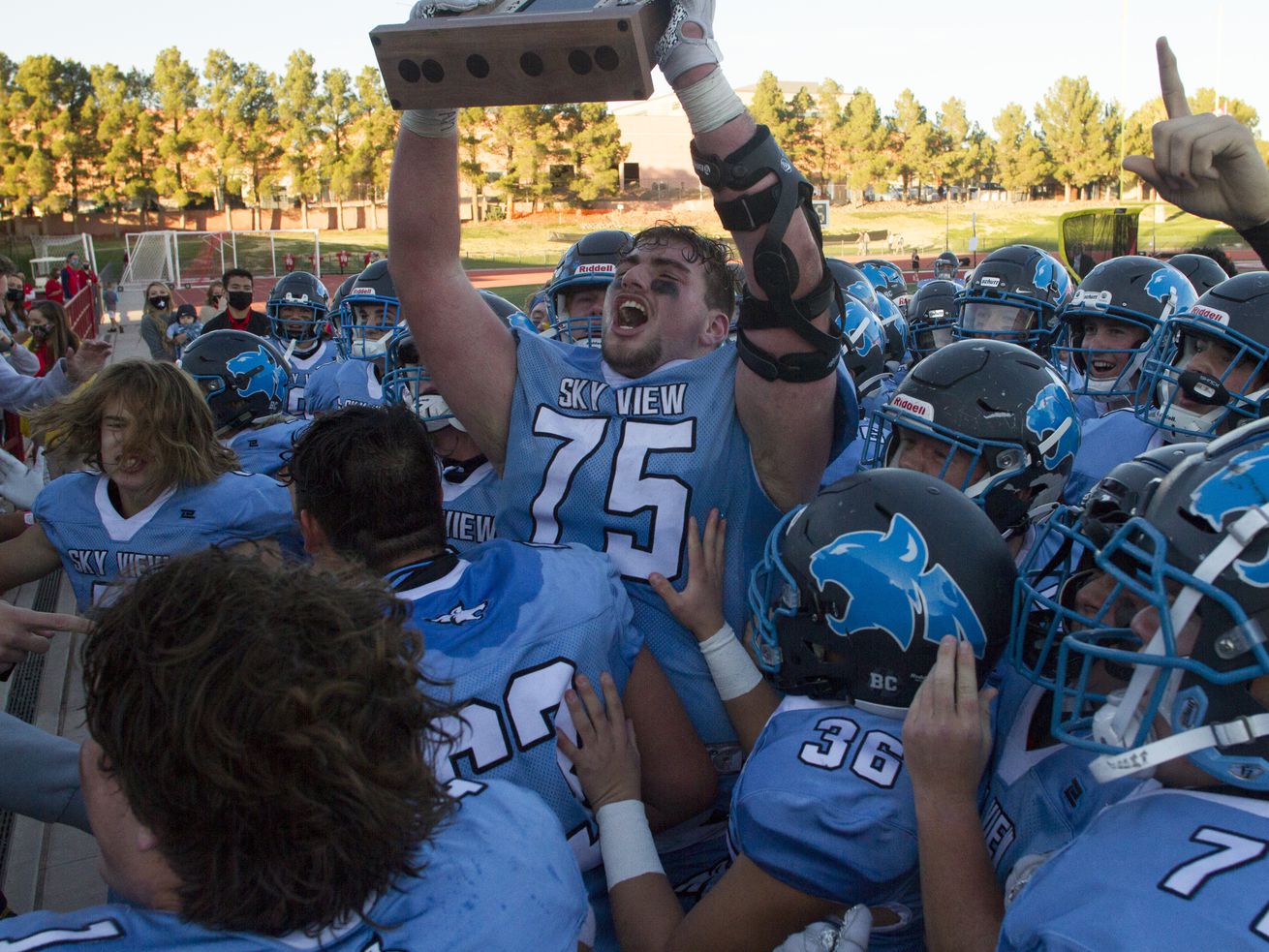 Sky View football holds off Pine View and claims the 4A state championship with a 39-33 victory on Saturday, Nov. 21, 2020. | Chris Caldwell, The Spectrum & Daily News

Leading 39-33 with two minutes left in the game and with the ball near midfield, Sky View had a big decision to make Saturday in the 4A football championship game. Facing fourth-and-1, the Bobcats could either punt the ball back to Pine View, or they could go for it and end the game.

“We wanted to go for it and coach just told me to go out there and get the first down,” said Sky View quarterback Kasen Carlsen. “Our coaches trusted us and we were able to get it done.”

Behind his offensive line, Carlsen got just enough for the first down to give the Bobcats (13-0) the victory and secure the program’s second consecutive state football title.

“It’s an amazing feeling to win it all again. We had a big target on our back this year as the defending champs and give Pine View credit for playing a great game. They are a great team and it came down to the wire. Both sides gave it their all.” — Sky View quarterback Kasen Carlson

“It’s an amazing feeling to win it all again,” said Carlsen. “We had a big target on our back this year as the defending champs and give Pine View credit for playing a great game. They are a great team and it came down to the wire. Both sides gave it their all.”

“Winning the second one (championship) is different, but it’s still awesome,” said Sky View coach Chris Howell. “It’s a different team this year and they played in very different circumstances. I’m just so proud of our kids and finding a way to differently today.”

Coming in, the Bobcat defense was allowing just 11.6 points per game and was coming off a 24-0 shutout over Ridgeline in the 4A semifinals. But in a battle of the top two teams in 4A Saturday afternoon at Dixie State, Sky View needed its offense to lead the way in a 39-33 shootout victory over Pine View (12-2). The win also extended the Bobcats’ winning streak to 25 games.

“Pine View’s offense is explosive and they can score quickly,” said Howell. “We’d go down and score on a five-minute drive, and they would come back and score in 10 seconds. We knew we needed to force turnovers today and our guys responded.”

While Pine View racked up 469 yards of total offense on just 49 plays, the Panthers also had four costly turnovers, including a fumble late in the fourth quarter.

“Sometimes the ball doesn’t bounce your way, but we’re proud of our kids for fighting and never giving up,” Pine View assistant coach Ben Meier said. “For us, it’s not about one game or whether or not we win a state championship. Our boys our already champions for getting to this point and we let them know after the game how …read more