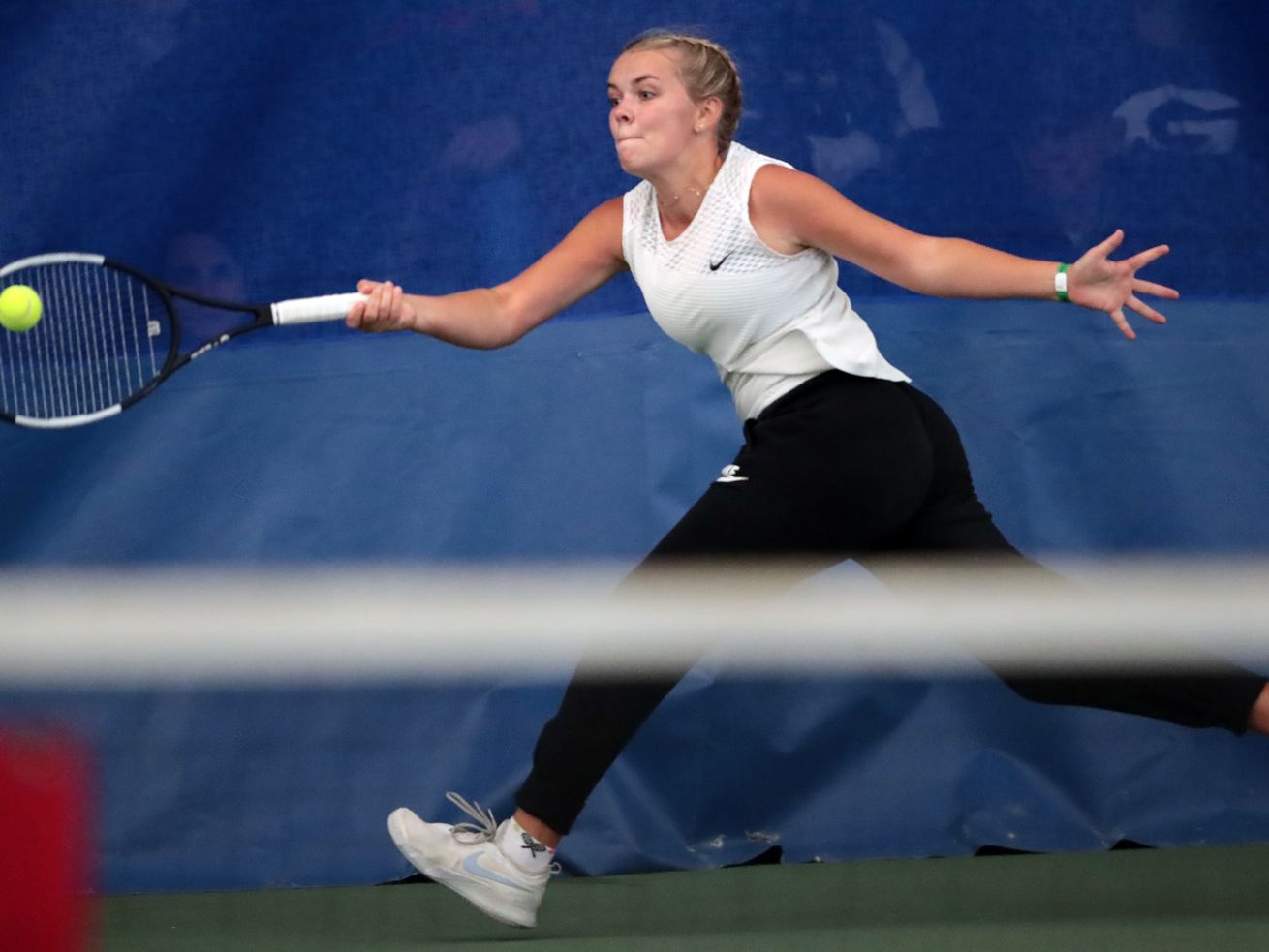 Morgan’s Katelyn Steel chases down a ball in the corner as she and Grantsville’s Sophie Crosby play for the 3A state championship at Liberty Park in Salt Lake City on Saturday, Oct. 9, 2021. | Scott G Winterton, Deseret News

Morgan High School’s girls tennis program has a long, long way to go to catch up to the Grantsville dynasty, but it chipped away at the trophy gap once again during this weekend’s 3A state tournament at Liberty Park.

Buoyed by a first singles title from Katelyn Steel and then a second doubles title by twins Ryann Jensen and Sydney Jensen, Morgan edged region foe Grantsville by the narrowest of margins, 19-18, during the final day of competition at the indoor facility at Liberty Park.

“The girls are all such competitors and they work really hard. They’ll go out on the court after practice and play on their own and practice on their own. They’ve just put in a lot of hard work and they’re just determined to get better and compete. They love competing,” said Morgan coach Katherine Hadley.

Morgan had never won a girls state title prior to its debut championship in 2019, and now it has won twice in the past three years.

Grantsville’s trophy case is stuffed with 18 girls tennis state championships, but it was seeking its first since 2003 and came agonizingly close to ending that 18-year drought.

The difference on Saturday was in the head-to-head matches. Morgan and Grantsville teams squared off in three different championship matches on Saturday, with Morgan winning twice. Each result was a repeat of the result at region.

Morgan’s emergence as a 3A tennis power is thanks in large part to Morgan assistant coach Heather Dutson, who started a youth tennis program in the area about five years ago. It’s helped raise the interest in the sport, and then Hadley said that recent success has snowballed on itself as more and more girls have come out to compete.

The clincher for Morgan was the Jensen/Jensen win at second doubles over Grantsville’s team of Lauren Holt and Afton Orgill, 6-2, 6-4. That win stretched the team lead to 19-16 and rendered the result of the final match of the tournament at first doubles a moot point in the team race.

“They stayed focused. They are probably the most determined, focused girls that I’ve seen. Those are two of the girls who will go on the court for hours after practice. Thy just stayed focused on each point and they pump each other up. They can win that way,” said Hadley.

The other individual champs this year were Maeser Prep’s Kelsey Ortega at second singles and Carbon’s Lieke Verweij at third singles.

For Morgan, it was Steel’s win at first singles that set the tone for the day. She had beat Grantsville’s Crosby twice earlier this season, but knew she would get Crosby’s best effort …read more