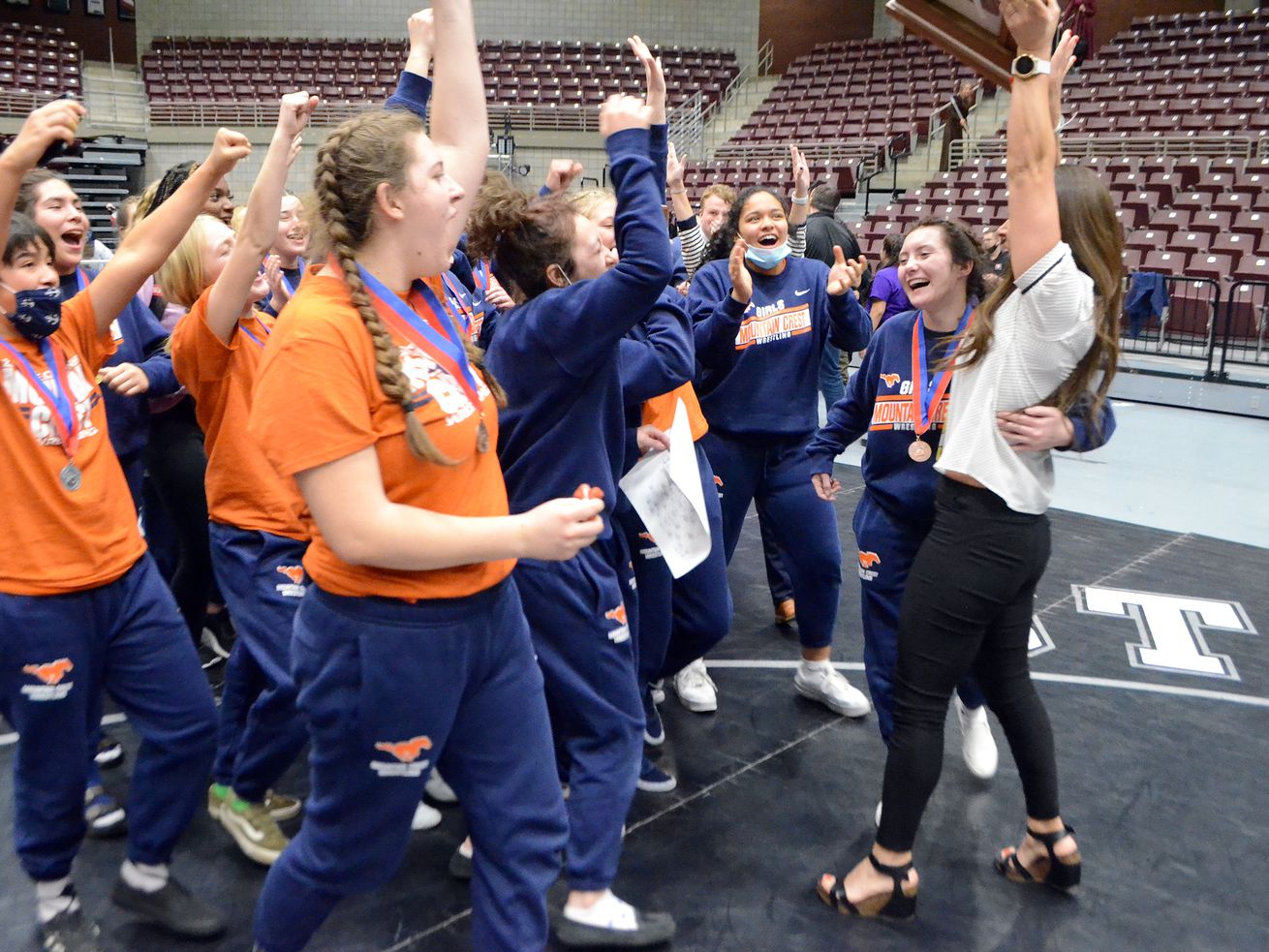 The Mountain Crest Lady Mustangs finished the first chapter of 4A girls wrestling with a state championship Saturday night at the Sevier Valley Center in Richfield.

“I’m so proud of them knowing that they are paving the way for all these women to wrestle in the future,” said coach Janae Liljenquist.

For most of the girls, their very first day on a wrestling mat was Nov. 17 of last year. Not only was the sport new for the girls, but also for their coach.

“I didn’t know how to wrestle either,” Liljenquist said.

She had a background in conditioning and weight training, so she said she drafted an excellent support staff to help coach, including Craig Dart, who taught the girls the techniques they would need to compete through the season.

“We ended up with 25 girls that first day and they just kept coming,” Liljenquist said.

“It’s such a physical sport, it really leveled the playing field,” Liljenquist said. “No one had been to expensive camps. We’re working together and we’re figuring it all out.”

Mountain Crest has a strong wrestling tradition, but Liljenquist said it was important for the girls program to remain separate and have its own identity.

“I’ve been doing this since I was seven, so it means a lot,” said Wakley, who was one of the few to have prior wrestling experience. She competed on the boys team as a freshman and jumped at the opportunity to participate in the girls program.

Ella Dekorver (132) was able to get a 16-11 win over Uintah’s Maycee Young in the championship bout.

“I’ve put in a lot of hard work,” Dekorver said. “This was my first year. It means so much to be here.”

For Hanna Evans (140), the journey to the state wrestling championship wasn’t one she took alone. Her brother Easton also picked up a championship medal Saturday night.

“I just never thought I’d be wrestling my senior year,” Hanna Evans said. She said if not for her brothers and coaches, she probably wouldn’t have made it.

“You have to be dedicated, and you can’t be scared to go out and do something you’re afraid of,” she said. She showed no fear as she was able to defeat teammate Sophie Longson in the finale.

“The first couple of weeks were tough, but we pushed through and it’s been awesome,” said Brynlie Hansen, who earned her state title by pinning Green Canyon’s Kiah Saurey.

“I just came here to have fun,” said Rosa Campos (170), who is a freshman and earned a state title in a bout against teammate Audrey Stabile.