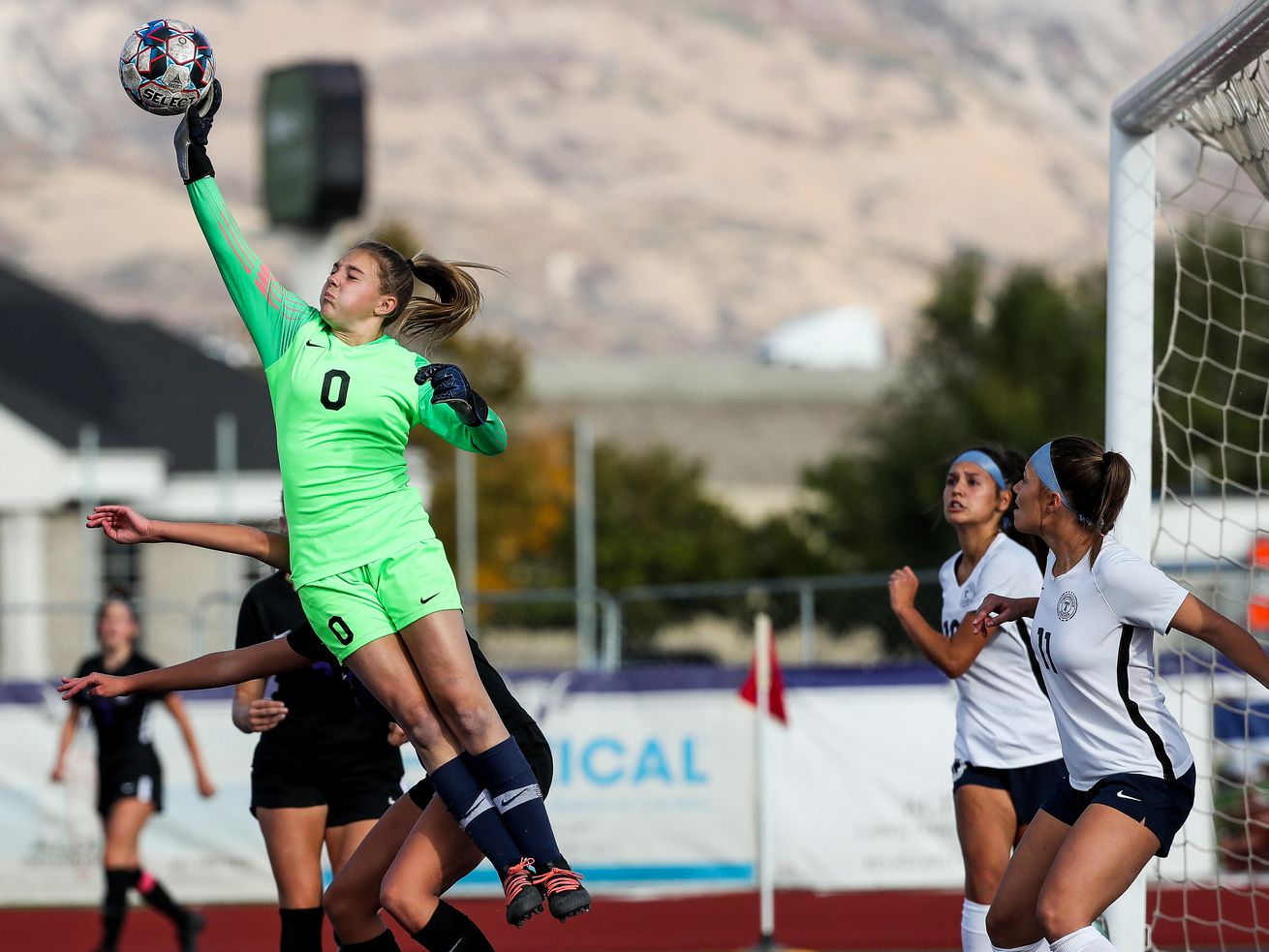 Timpanogos goalkeeper Emma McIff makes a save after a corner kick in a 5A girls soccer game against Lehi in Lehi on Tuesday, Oct. 13, 2020. | Spenser Heaps, Deseret News

Brynn Rees’ second-half goal helped 5A’s top-seeded Viewmont escape with the narrow victory over upset-minded No. 17 seed Park City. Lydia Pitt recorded the shutout for the Vikings, who advance to the 5A quarterfinals with the win.

No. 9 seed Murray made quick work on the road against No. 8 seed Maple Mountain in the 5A second round, scoring all four goals in the first half en route to the comfortable victory. Sammie Sofonia recorded a hat trick for the Spartans, with Karime Antonio notching a goal as well. Maple Mountain’s lone goal was scored by Kenley Nelson in the second half.

Fifi Ward scored on an assist from Necie Gubler in the first half, and that was all the scoring No. 4 seed Olympus needed as it edged region rival East for the 5A second round victory. Callie Droitsch recorded the shutout for the Titans.

Olivia Seager, Sage Stott and Annie Hales all scored first-half goals as 12th-seeded Brighton went on the road to upset No. 5 seed Springville in the 5A second round. Lox Neves scored the lone goal in the second half for Springville, which couldn’t put anything past Brighton’s stout defense in the second half.

Marianne Barber scored a pair of goals, with Kalea Woodyatt and Abigail Ferrell each scoring as well as No. 3 Farmington scored three goals in the second half to pull away from No. 14 seed Mountain View for the 5A second round win. Taryn Barraclough, Kennedy Freeman, Whitney Avei and Ferrell all recorded assists as well for the Phoenix.

Defending 5A state champion Skyline advanced to the quarterfinals with a strong shutout victory over Skyline, with Bri Frey recording the shutout in goal. Lily Hall and Ali Swensen provided the scoring in the first half on goals one minute apart for the sixth-seeded Eagles.