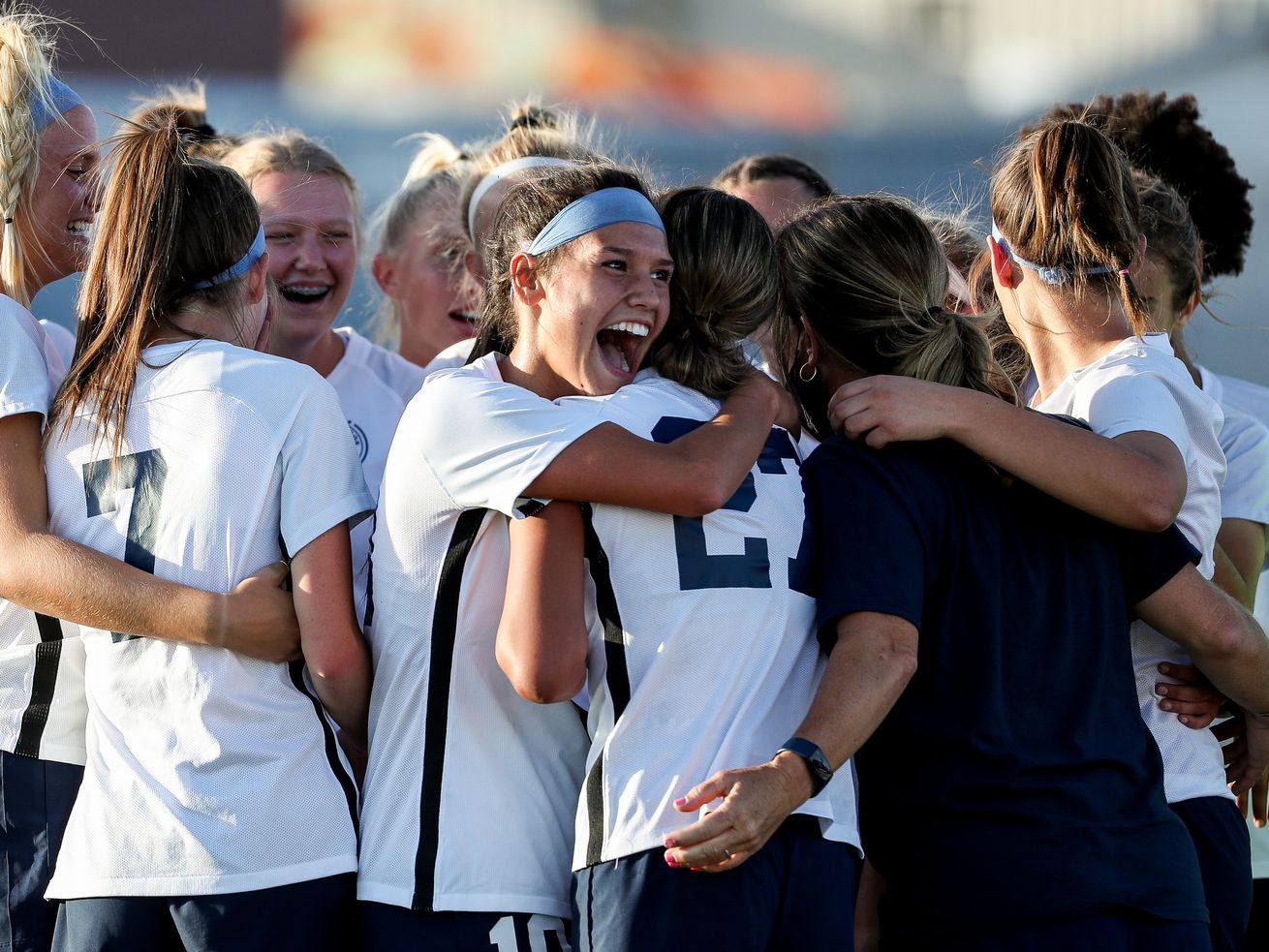 Timpanogos’ Kendall Maynard smiles after her team’s win over Lehi in a 5A girls soccer game in Lehi on Tuesday, Oct. 13, 2020. | Spenser Heaps, Deseret News

Boosted by an early 2-0 lead, the Timberwolves managed to get by Region 7 rival Lehi on Tuesday

LEHI — A well-executed game plan, seizing on opportunities provided and even getting a little bit lucky all played key in Timpanogos’ 3-1 win over region rival Lehi in the second round of the 5A playoffs on Tuesday.

All of it left Timpanogos coach Robyn Bretzing beaming a bit over her relatively young team’s performance.

“Lehi’s a great team, and … we had to play to our strength, which is our speed up top. We decided that we were just going to play a more direct style of soccer, and it worked for us today. Sometimes you have to change up your game a little bit.” — Timpanogos coach Robyn Bretzing

“We knew this was going to be a tough game, but I think our girls really showed their potential when it came to fight and playing until the end of the game,” Bretzing said. “… I was proud of our girls’ mental toughness to be able to stay in the game and keep fighting.”

Of course all of what Bretzing mentioned helps when those same players forge an early 1-0 lead and then enter the half up 2-0.

The first goal came by virtue of an indirect kick that Sierra Pennock skillfully booted through for the first goal of the match with 28:30 left in the first half. Lehi threatened from there, working their way back before the Timberwolves halted a lot of it with a goal scored by Summer Christensen with 6:50 remaining until the break.

Christensen’s goal came by virtue of Bretzing’s offensive strategy going in, calling for her team change their offensive attack up a bit.

“Lehi’s a great team, and … we had to play to our strength, which is our speed up top,” Bretzing said. “We decided that we were just going to play a more direct style of soccer, and it worked for us today. Sometimes you have to change up your game a little bit.”

Bretzing and her team knew Lehi was far from finished at the half, having lost twice already to the Pioneers this season, and a goal scored by Lehi leading-scorer Kennedi Schmidt with a full 31:19 remaining confirmed it. From there the Pioneers kept the pressure on, with the Timberwolves able to withstand a lot of it.

“We were winning the balls, and to me the shift in the game came when our defenders stepped in front of their forwards to win the 50/50 balls,” Bretzing said. “We encouraged our players all week to be more aggressive in the back.”

A lot of it led up to a PK opportunity for Timpanogos with 18:52 left, which was converted by Lataya Brost.

“We got a couple of lucky breaks,” Bretzing said. “They had some chances to score, and sometimes you get a …read more