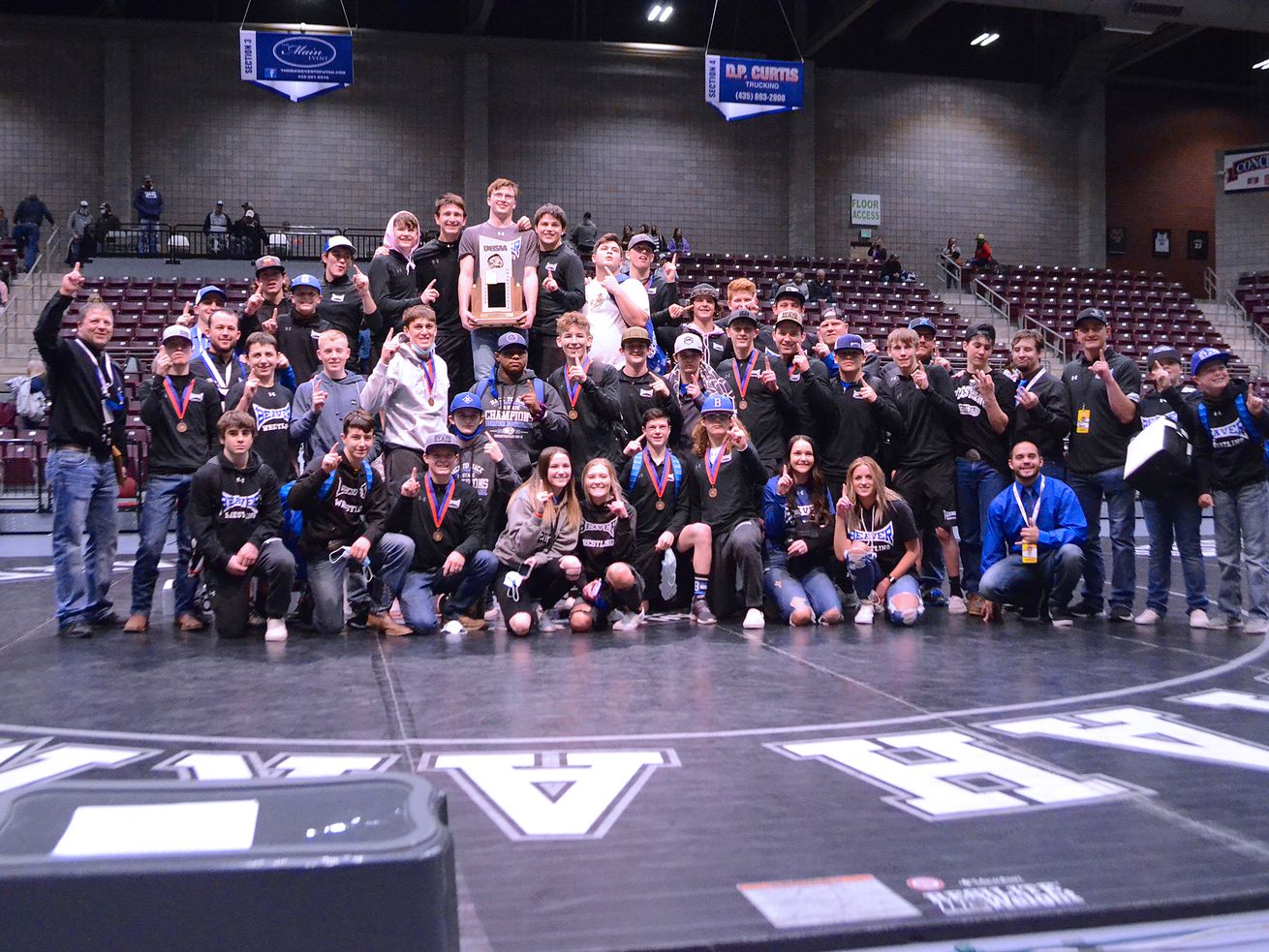 Beaver celebrates winning the 2A wrestling state championship at the Sevier Valley Center in Richfield on Saturday. | David Anderson

“This was a complete team effort,” coach Robbie Bradshaw said. “Every point mattered, every pin mattered. Every kid is important, and we couldn’t have done it without every single one of them.”

Beaver ended the tournament with 254.5 points. Millard pushed Beaver all through the tournament and finished in second place with 242 points. Altamont followed in third place at 208.

“We knew they would be tough,” Bradshaw said. “Millard moved some kids around, and we figured it would be within about 10 points.”

It took a long time for Beaver to earn its first 2A state wrestling trophy, and it was the result of a team philosophy known as “the process,” Bradshaw said.

“Our seniors have stuck with the program for a long time,” Bradshaw said.

He said the seniors started out with the town’s junior wrestling program. When Bradshaw took over as head coach of the Beavers 10 years ago, he had to convince kids to buy into a long-term commitment to wrestling.

“When I started coaching the junior high program, we had four kids,” Bradshaw said. “Now we have 52.”

Bradshaw said Saturday’s win left him feeling extremely grateful for the support his program has received from the community, but especially from the kids.

“They stuck with it and they believed in the process,” Bradshaw said. “I credit these seniors with building the program by sticking with it and teaching the younger kids. It’s all part of the process.”

Another part of the process has been the community support, which resulted in a new top of the line wrestling room for Beaver this past year.

“If I could just say one thing to the kids, it’s that Robbie loves ya,” Bradshaw said. “I’m grateful for their sacrifice and their parents being willing to let them spend the time to do this.”

The final part of the process was the team’s approach to each match.

“We told the kids all season, ‘Score points and have fun, then winning will take care of itself,’” Bradshaw said.

Evans outlasted North Summit’s Bronson Richins in a back-and-forth match that ended in an 8-7 decision — one of the closest matches of the day.

“It feels good,” Evans said, adding that the hours of gym time and wrestling his brothers helped him get to the final match of the year.

“I want to go on and do more with it,” Evans added.

Duchesne’s Kaleb Sanchez was named the tournament’s outstanding wrestler in the lower weight divisions. Sanchez captured the individual title in the 138-pound weight class in a bout against Beaver’s …read more

Marvel Studios & Disney+ | SUPER BOWL 2021 | Promo
Utah vs. Cal: How to watch, listen to or stream the meet
SHARES
ShareTweet