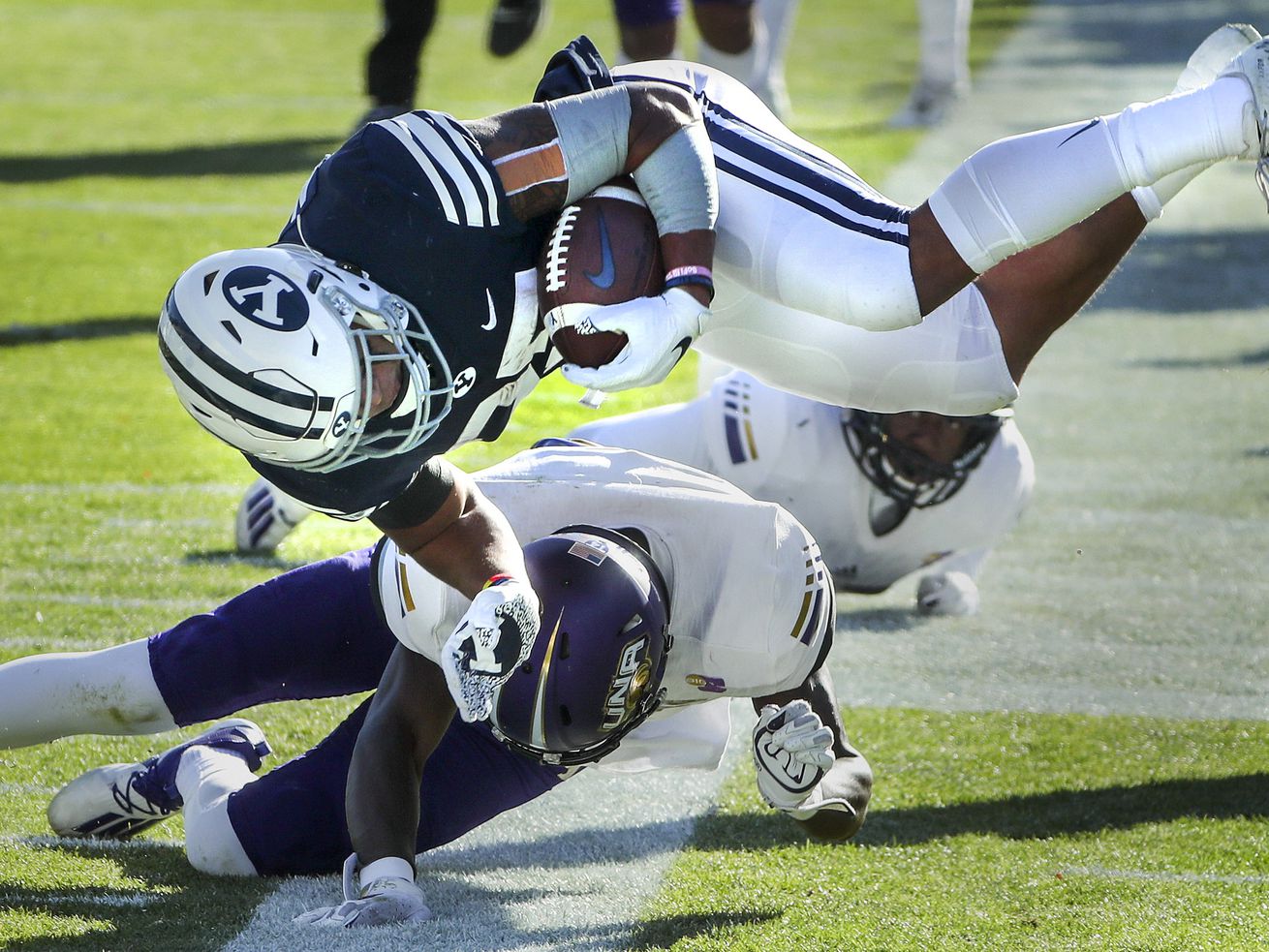 Brigham Young Cougars running back Tyler Allgeier (25) gets flipped into the air by a North Alabama defender as he dives for the end zone during a game in Provo on Saturday, Nov. 21, 2020. | Steve Griffin, Deseret News

The Cougars had contributions across the board in the blowout win.

It wasn’t a question of if No. 8 BYU would stay perfect on Saturday afternoon. It was a question of how impressive the Cougars would be and how many backups could get valuable reps in facing North Alabama at LaVell Edwards Stadium.

Mission accomplished on both fronts, as BYU rolled to a 66-14 victory.

The Cougars improved to 9-0 for just the fourth time in school history with the victory over an FCS opponent, as BYU emptied its bench in the second half.

BYU’s offense delivered through the afternoon, to the tune of 555 total yards. It was a balanced attack for the Cougars, with 277 passing yards and 278 rushing yards.

BYU was 8-for-8 in the red zone, scoring touchdowns on every possession inside the North Alabama 20. The Cougars also averaged 9.4 yards per play — including an 11.3 average in the first half — and had a pair of pass plays over 50 yards and two runs over 30 yards.

Zach Wilson completed 10 of 16 passes for 212 yards and four touchdowns in the win, while Tyler Allgeier had 13 carries for 141 yards and two touchdowns, as they both sat in the second half.

The Cougar defense kept the Lions under wraps for much of the day. It wasn’t a perfect effort, but BYU held North Alabama to two touchdowns — one in each half.

The Lions had success in the pass game, throwing for 305 yards and a touchdown. The Cougars kept the North Alabama rushing attack largely in check, holding the visitors to 49 yards.

North Alabama was 6 of 13 on third down, but 0 of 3 on fourth, and BYU had three sacks. The Cougars also forced three turnovers and scored touchdowns off each one.

On defense, linebacker Isaiah Kaufusi shined with four tackles, a sack and a fumble recovery that, with a 50-yard return, set up a short touchdown drive. Several defenders had strong individual efforts — Malik Moore put up a team-high five tackles and had his first interception of the year, Earl Tuioti-Mariner registered back-to-back sacks, including one on a fourth-down play, and Micah Harper had four tackles and a fumble recovery.