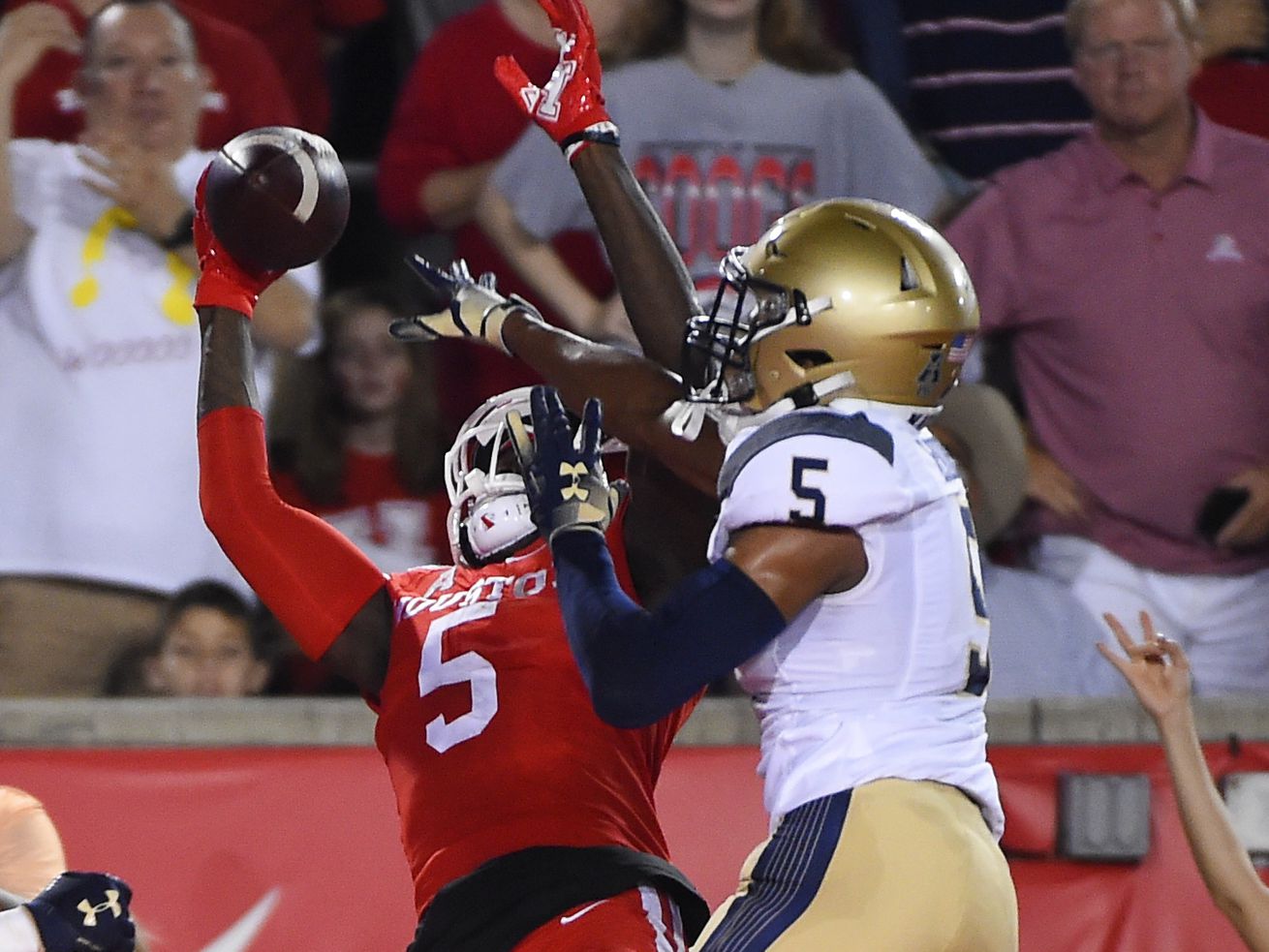 Houston wide receiver Marquez Stevenson, left, goes up for a catch in the end zone against Navy on Saturday, Nov. 30, 2019, in Houston. Stevenson, a likely future NFL star, will be a player the Cougars will need to be aware of Friday night in Houston. | AP

What do BYU football and Houston coach Dana Holgorsen have in common?

Well, right up at the top it is the love of the pass, traditional roots that cross back to LaVell Edwards, and involvement in rewriting NCAA records.

On Friday, Holgorsen will coach against Kalani Sitake. Both men should be able to relate to the legendary Edwards, who would have turned 90 this past week.

Holgorsen, a former athlete at Iowa Wesleyan, got involved with then-coach Hal Mumme, who then went on to coach at Valdosta State, where all three tapped into an offensive philosophy with a guy named Mike Leach.

AP Photo/Rogelio V. Solis
Former BYU grad assistant Mike Leach, who learned a lot about the passing game while a member of LaVell Edwards’ staff, worked alongside Houston coach Dana Holgorsen when both were part of the Valdosta State football staff.

Mumme and Leach have often referenced the impact Edwards had on their coaching philosophies.

In this incubator of offensive brain trusts, trading ideas and philosophies, Leach introduced Mumme to passing concepts he learned by watching practices at BYU under Edwards. It involved multiple receiver routes, attacking defenses geometrically downfield, applying pressure to defenses by forcing coverage to commit while attacking other vulnerabilities.

Holgorsen returned to Houston as head coach after his first head coaching job at West Virginia.

Holgorsen helped tutor Case Keenum, the NCAA’s most prolific passer for total yards and touchdowns while at Houston. His FBS mark still stands at close to 20,000 yards (19,217).

He also has two Biletnikoff Award winners in Michael Crabtree (Texas Tech) and Justin Blackmon (Oklahoma State) to his credit.

So, this thread of passing offense has weaved its way from the 1980s with BYU and Edwards through a young Holgorsen through Mumme and Leach to this Friday when the Cougars meet the Cougars in a most interesting matchup.

Holgorsen is known for drinking the popular energy drink Red Bull, downing dozens of cans a day. He makes close to $4 million in salary at Houston, a football program that yearns for the days of the ’90s with Heisman winner Andre Ware, back when offensive firepower reigned.

Coincidently, Ware will be on the ESPN mic for the nationally televised BYU-Houston game …read more