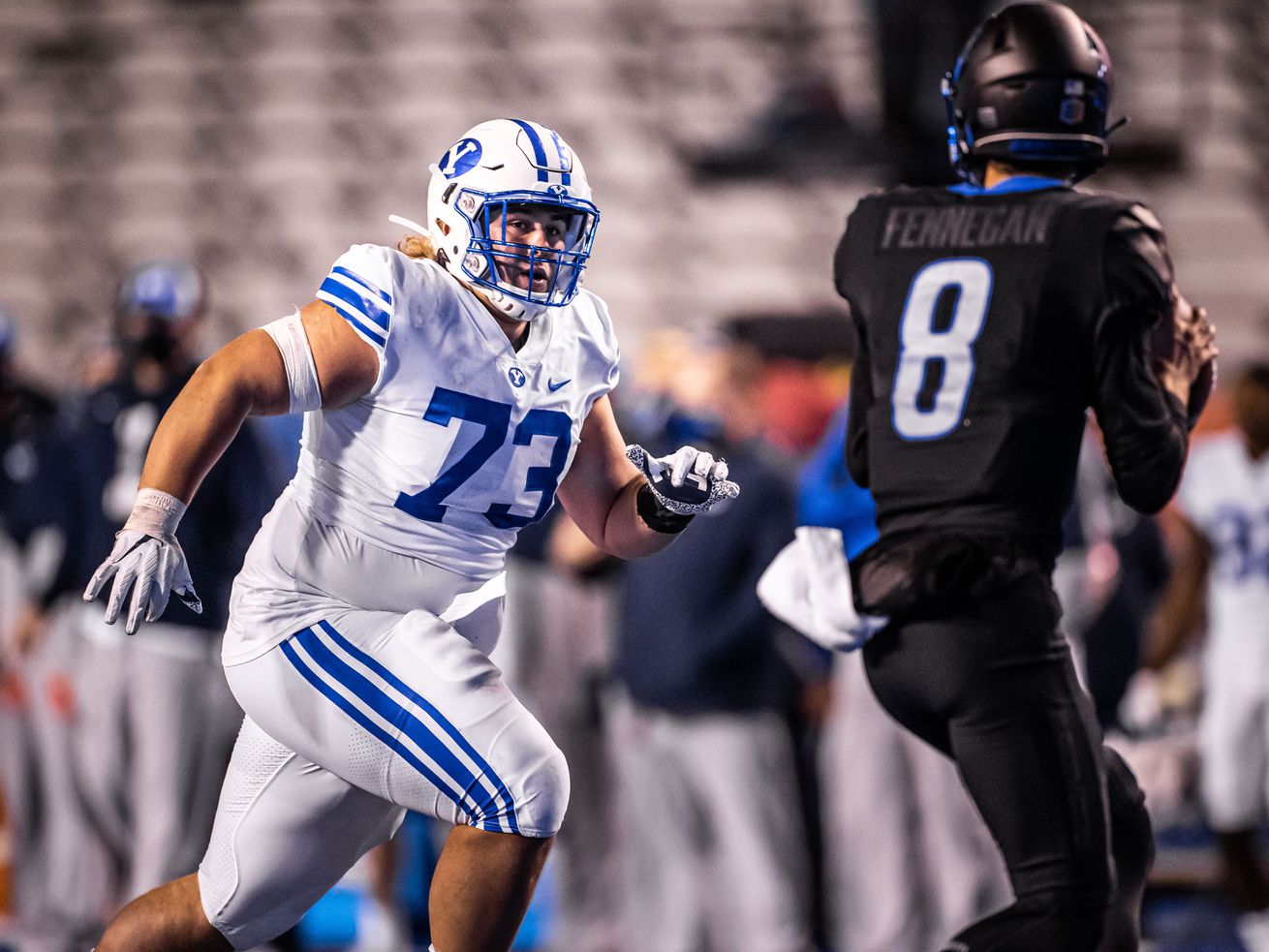 BYU defensive tackle Caden Haws pursues the Boise State quarterback during a game in 2020. Haws has basketball DNA in his system, but chose to pursue football instead. | Nate Edwards, BYU Photo

An impromptu lesson from his father, a former Utes tight end, after a disappointing performance in the seventh grade spurred BYU defensive lineman Caden Haws to get tougher, work harder and excel

When BYU defensive tackle Caden Haws was playing youth football in the seventh grade in Arkansas, “he was getting his tail handed to him pretty good” in one particular game against a “kid that was a little more street tough,” according to his father, former University of Utah tight end Kurt Haws.

Father took son to the side of some bleachers while the eighth-grade game was going on and the duo practiced against each other for the next hour or so.

“You know what? From that time forward, it never happened again,” Kurt Haws said. “It was my choice. He wasn’t too happy about it, but it was a memorable moment and he never forgot it. Since then, he has never been afraid to put in the work. He hasn’t been dominated like that since.”

Having been recruited to BYU as an offensive lineman (more on that later), the 6-foot-2, 315-pound Haws switched to defensive line a few years ago and is now a starter for the Cougars, having replaced NFL-bound nose tackle Khyiris Tonga in the lineup.

Ranked No. 19 in the AP Top 25, BYU (5-1) takes on 5-1 Baylor on Saturday at McLane Stadium in Waco, Texas, in a preview of a future Big 12 matchup. Offensive coordinator Aaron Roderick said Wednesday that starting QB Jaren Hall “is completely healthy now” and should get the start for the second straight week.

“So I went and talked to Kalani (Sitake) and he said, ‘Oh, we wanted to switch you a year ago — go to defensive meetings today.’ And I never looked back. That’s how it happened. Kind of a funny story.” — BYU defensive tackle Caden Haws on moving from offensive line to defensive line

“Everybody is ready to go,” Caden Haws said Tuesday in a Zoom meeting with reporters. “Losing to Boise was tough, but everybody fought until the end. That has been the morale in practice this week. We are here to fight, and we are excited to get to go play Baylor this week.”

Kurt Haws is the second cousin of former BYU point guard Marty Haws, but basketball was never in the cards for young Caden and his brother, Luke, now an offensive guard at Division III Washington and Lee University in Virginia.

After he was a somewhat surprising selection in the fourth round of the 1994 NFL draft by Washington because he only caught 12 passes for 200 yards and three TDs in a two-year career at Utah, Kurt Haws settled in Arkansas …read more