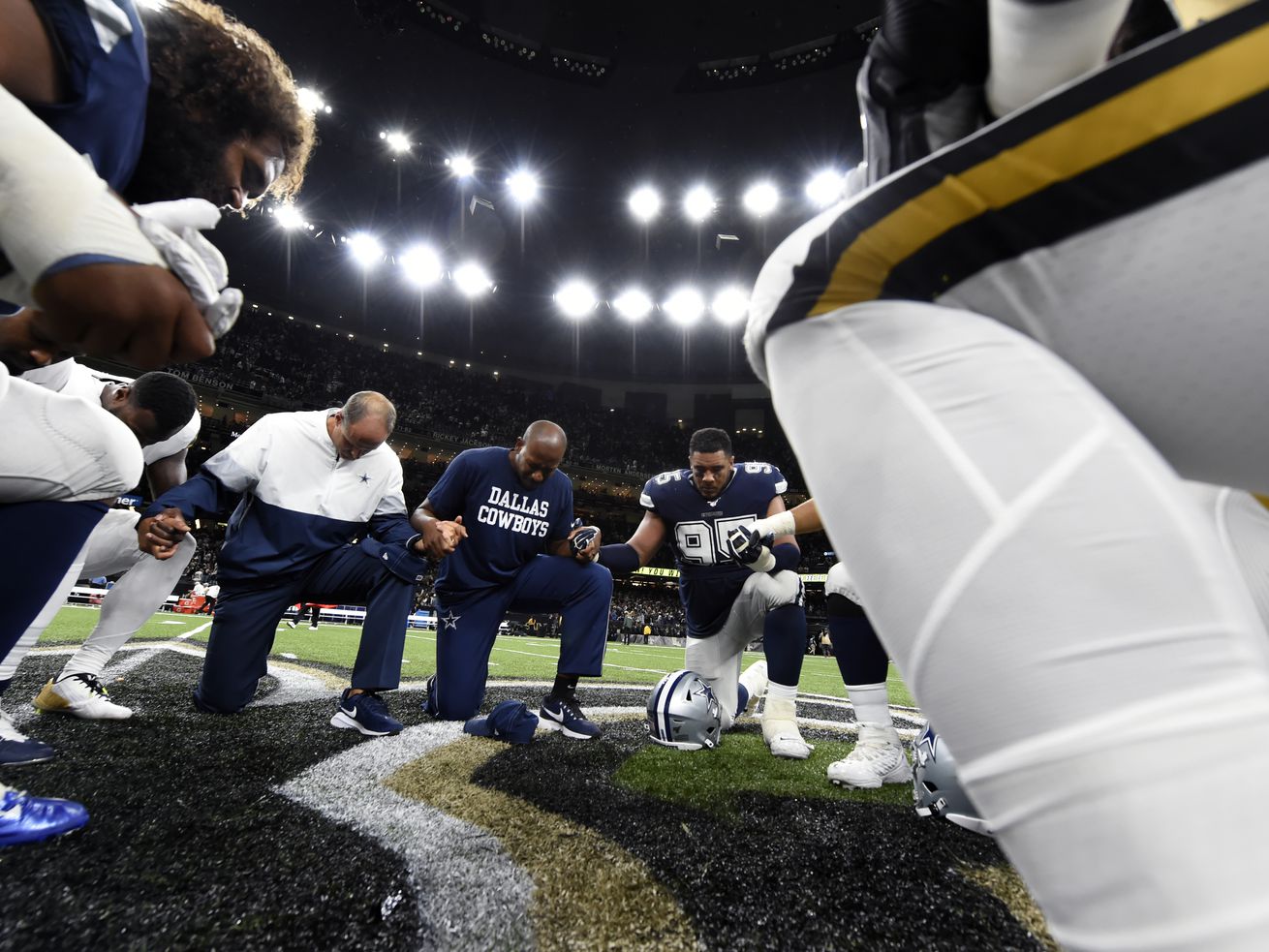 Players and coaches form a prayer circle on the field after an NFL football game between the New Orleans Saints and the Dallas Cowboys in New Orleans on Sunday, Sept. 29, 2019. | Bill Feig, Associated Press

This article was first published in the State of Faith newsletter. Sign up to receive the newsletter in your inbox each Monday night.

I wasn’t expecting to be impressed when I cued up the Pray app’s new series of NFL prayers. I figured the brief recordings would be filled with sports clichés and team-related puns, and that I’d spend more time rolling my eyes than thinking about religion.

To a certain extent, my instincts were right. The Rev. Jeff T. Osborne, who put together the team prayers, squeezed a lot of silly wordplay into the one- and two-minute reflections.

“Like the great falcon never drops its prey, God, we are thankful that you never drop us,” he said in his message for fans of the Atlanta Falcons.

“This isn’t about luck,” noted the Rev. Osborne in the Indianapolis Colts prayer in what felt like a clear (and clever) reference to the team’s recently retired quarterback, Andrew Luck.

The prayer for the Buffalo Bills referenced the stadium’s famous tailgate culture. The one for my team, the Green Bay Packers, included an unusually long ode to the beauty of Lambeau Field. Several of the messages highlighted the specific number of fans that would be at home games.

In Annapolis with Ken Niumatalolo

Despite these idiosyncrasies, I found myself oddly touched by the Rev. Osborne’s work, which I listened to on a whim after stumbling on a related press release.

The 32 prayers — one for each NFL franchise — were overflowing with both confidence and gratitude. They weren’t for people afraid of losing or performing poorly; they were for people worried about not appreciating the beauty of the game enough.

As a fan, I definitely fall into the former camp. I get so nervous during big games that I’ve been known to actually leave the room — or even the house — when my team is on the verge of falling apart.

Because of this tendency, the return of the NFL each fall is both a blessing and a curse. I get so excited to spend the weekend watching games, but I also dread the particular pain of a dropped pass, an interception or a 38-3 Packers loss to the New Orleans Saints.

In other words, if I wrote a series of NFL prayers, the reflections would include sentiments like “Please, if we must lose, let it not be embarrassing,” or “God, please let the refs keep their flags in their pockets.”

Thankfully, the Rev. Osborne and the Pray app team was in charge instead of me, and they kept things joyful and inspiring. The 32 prayers focus on something I’ve always loved about football and other team sports: the idea that no …read more