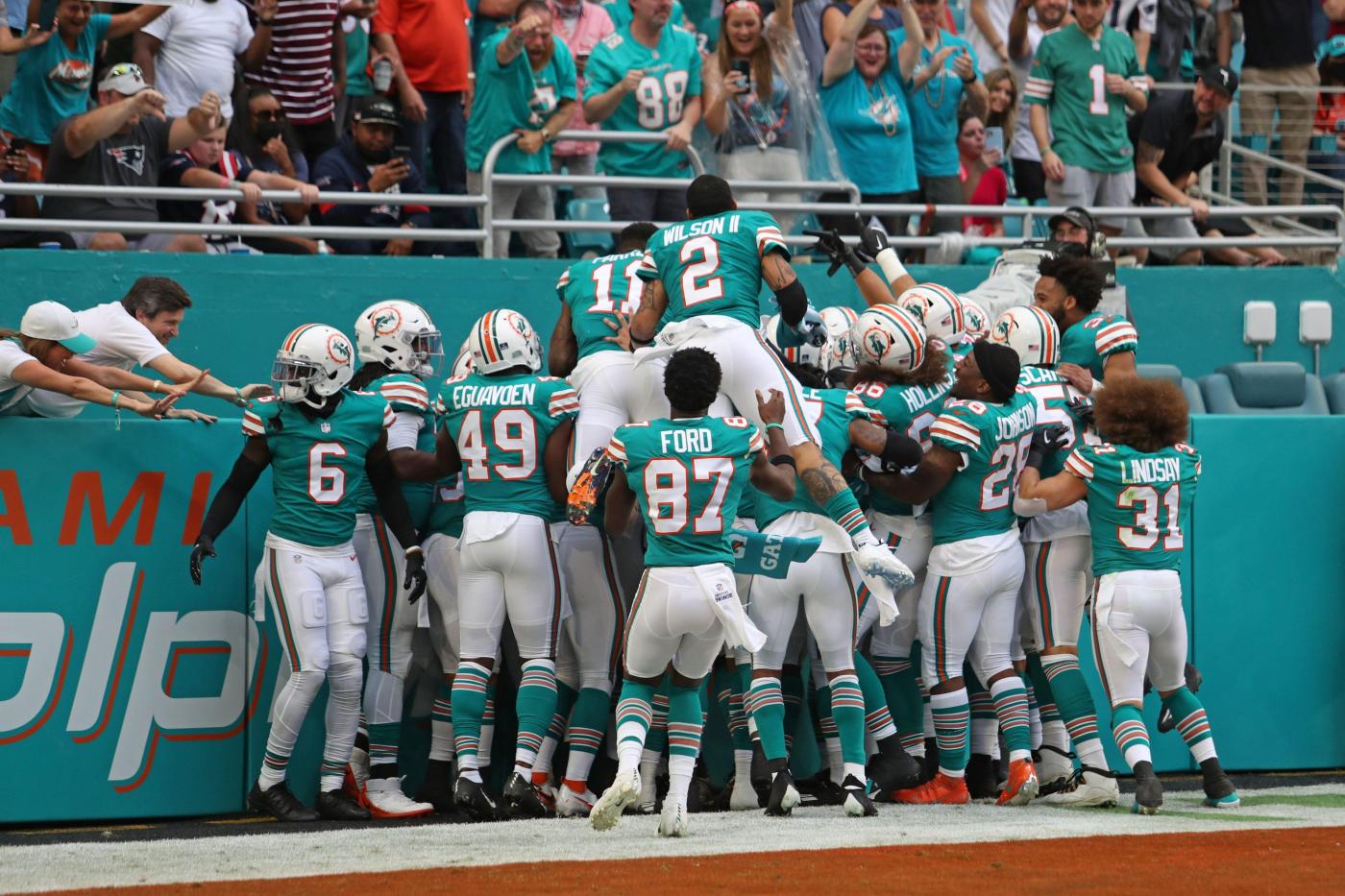 The Miami Dolphins swept the New England Patriots for the first time in 20 years.

They ended with a winning, 9-8 record.

But it has to be asked: How much bigger would this game have been if they’d played this way last Sunday in Tennessee?

It was a game without consequences. The Dolphins season still is over after beating New England, 33-24. The Patriots still go to the playoffs with their 10-7 record.

Here are 10 thoughts on the game:

1. Stat of the game: The Dolphins had a season-high 195 yards rushing on 43 carries. They averaged 85.8 rushing yards entering Sunday, ranking them 31st in the league. Duke Johnson (see No. 6) rushed for 24 times for 117 yards and a touchdown. The Dolphins changed the offensive line with undrafted rookie Robert Jones starting in place of Jesse Davis at right tackle. The Patriots didn’t have a great rushing defense, ranked 21st in giving up 119.3 yards a game on the ground entering Sunday. Still, that rushing total?

2. Jaylen Waddle broke Anquan Boldin’s record for 101 rookie receptions with his third catch on the first drive. His fourth catch was for a a TD. Bill Belichick took care of him after that, changing coverage so Waddle had one catch the rest of the day, ending with five catches for 27 yards. The NFL’s never been big on defining numbers in the manner baseball has been, so the move from the 16- to the 17-game season isn’t some asterisk-maker for me on the numbers. Waddle, by all accounts, had a great rookie year. Now for the advanced conversation: Is he a No. 1 receiver? And, yes, it matters when you pick him No. 6 in the draft. Boldin was a great slot receiver, but Larry Fitzgerald was the No. 1 receiver. Waddle can be a great slot receiver — a vital position. But the classic No. 1 receiver is the one who opens up offenses. Ja’Marr Chase is the rookie in Cincinnati with a quarterback to match. We’ll have to see how Waddle’s career plays out to see if that’s who he is in coming years.

3. Stat of the Game II: Tua had 54 yard passing on the opening touchdown drive, completing 7-of-7 passes. For the rest of the game, he completed 8-of-15 passes for 55 yards. The good news was the Patriots dropped the two interceptions he would’ve thrown. The bad news: Waddle dropped a would-be 85-yard touchdown on a quick slant. Tua, though, did run for two important first downs, including on third-and-8 with less than two minutes to play.

4. Patriots quarterback Mac Jones’ first pass Sunday turned into a pick-6 for Xavien Howard. That stretched the Dolphins lead to 14-0 midway through the first quarter. It also added to why Howard was my choice for the team MVP. Waddle won. Again, he had a great season. But Howard’s constantly taking top receivers one-on-one, allowing the rest of the defense to do aggressive …read more