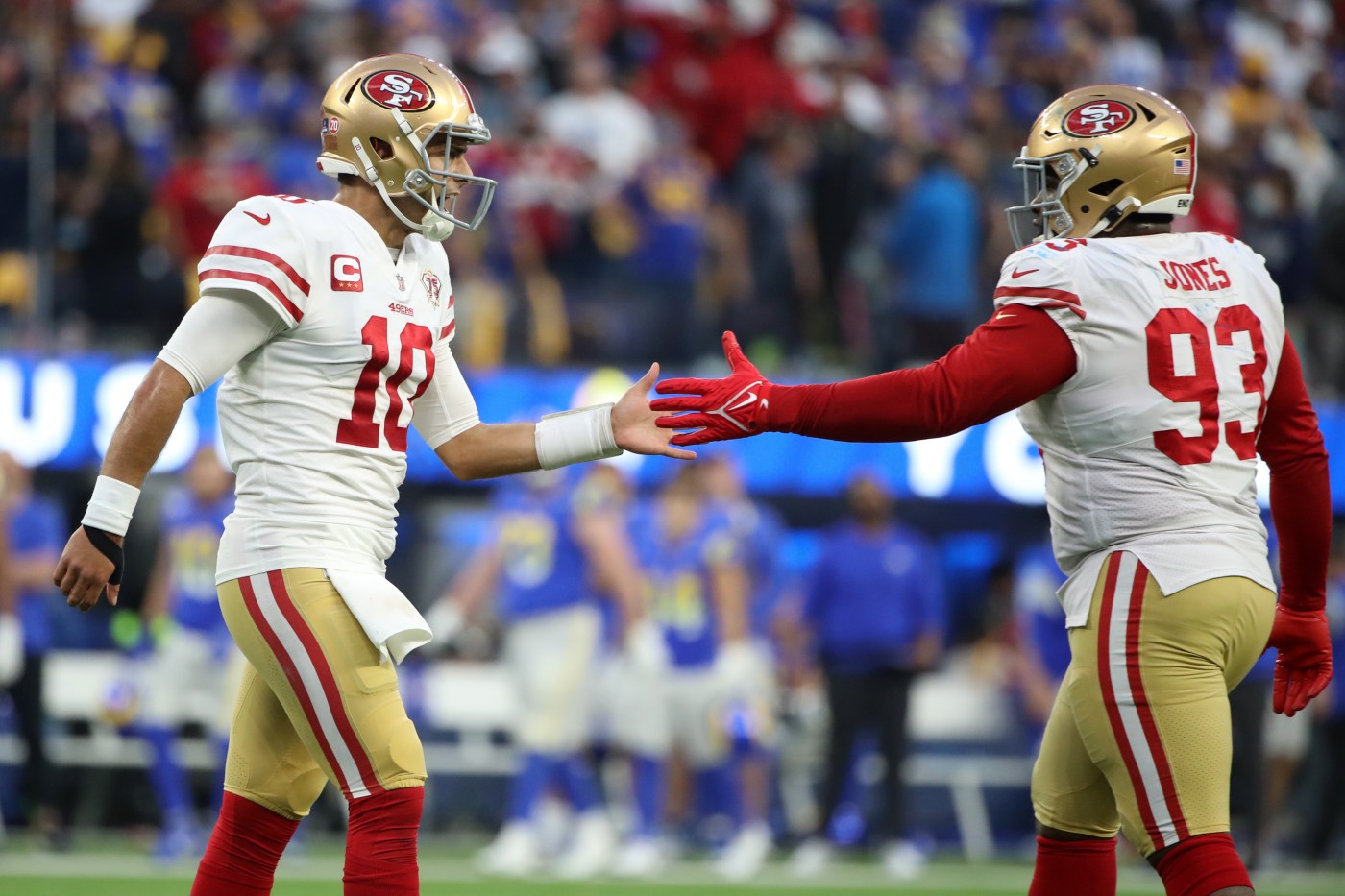 The 49ers are in the playoffs, and with their not-dead-yet moxie and play-making ability, don’t rule them out from a SoFi Stadium return for next month’s Super Bowl.

After spotting the Los Angeles Rams a 17-0 lead, the 49ers rallied Sunday for a 20-17, overtime win to capture the NFC’s No. 6 seed, the second of three wild-card berths.

Up next is a renewal of an epic rivalry and a visit to the NFC East-champion Dallas Cowboys (12-5). It will be their first postseason meeting since the 1994 49ers won in the NFC Championship Game en route to the franchise’s fifth (and last) Lombardi Trophy.

Could the 49ers’ ever-shaky pass defense protect that lead? Well, to no surprise this season, a third-and-10 pass to Cooper Kupp resulted in the 49ers’ season-long speciality: a pass interference penalty (on Emmanuel Moseley). Then came an unlikely hero: Ambry Thomas, who intercepted a Stafford bomb down the sideline, the type of deep pass that 49ers’ cornerbacks have yielded at inopportune moments since September.

What a comeback it was. Not just from 17-0. The 49ers were down 24-17 with 1:27 remaining. Granted a reprieve, Garoppolo engineered an 88-yard, game-tying touchdown drive.

It took five plays, the longest being a 55-yard catch-and-run by Deebo Samuel, and the clutchest being a 14-yard scoring strike to Jauan Jennings, who earlier caught a game-tying touchdown pass from Samuel amid a third-quarter rally.

Garoppolo, playing with a sore thumb that kept him out last game, overcame a yucky first half and finished 23-of-32 for 316 yards, with a touchdown and two interceptions. That touchdown (to Jennings) forced overtime and extended the 49ers’ season, not to mention the quarterbacks’ tenure that seemed doomed a year ago when the 49ers pursued Stafford in a trade and then traded up to draft Trey Lance.

The Houston Texans fired coach David Culley, and a Chicago Bears coordinator has an interview with another team. Here’s the latest in the NFL’s firing and hiring cycle.

OK, back to Jennings, and that is what the 49ers did in overtime. The second-year receiver who came up with a 34-yard reception to the Rams’ 24-yard line and then a 9-yarder to the 8, teeing up Gould for the winning points.

The comeback took hold in a riveting third quarter.  Samuel produced two touchdowns, first on a 16-yard run and then on a stunning, 24-yard option pass that tied the score at 17.

Garpopolo didn’t look too impaired by his thumb, but he did have two passes intercepted, the second of which halted a potential go-ahead scoring drive with 7:42 to go.

Making that Rams’ interception was Jalen Ramsey, who broke up the pass intended for George Kittle and juggled the ball until seizing it in the end zone, sparking hope for a Rams’ revival. (Garoppolo tried in vain for officials to call a roughing-the-quarterback penalty, after he got hit in the helmet after the throw.)

That set the off-Hollywood stage for fourth-quarter fireworks, and the Rams used the NFL’s most productive tandem this season: Stafford to Kupp. They hooked up on a 30-yard catch (on third-and-6) …read more