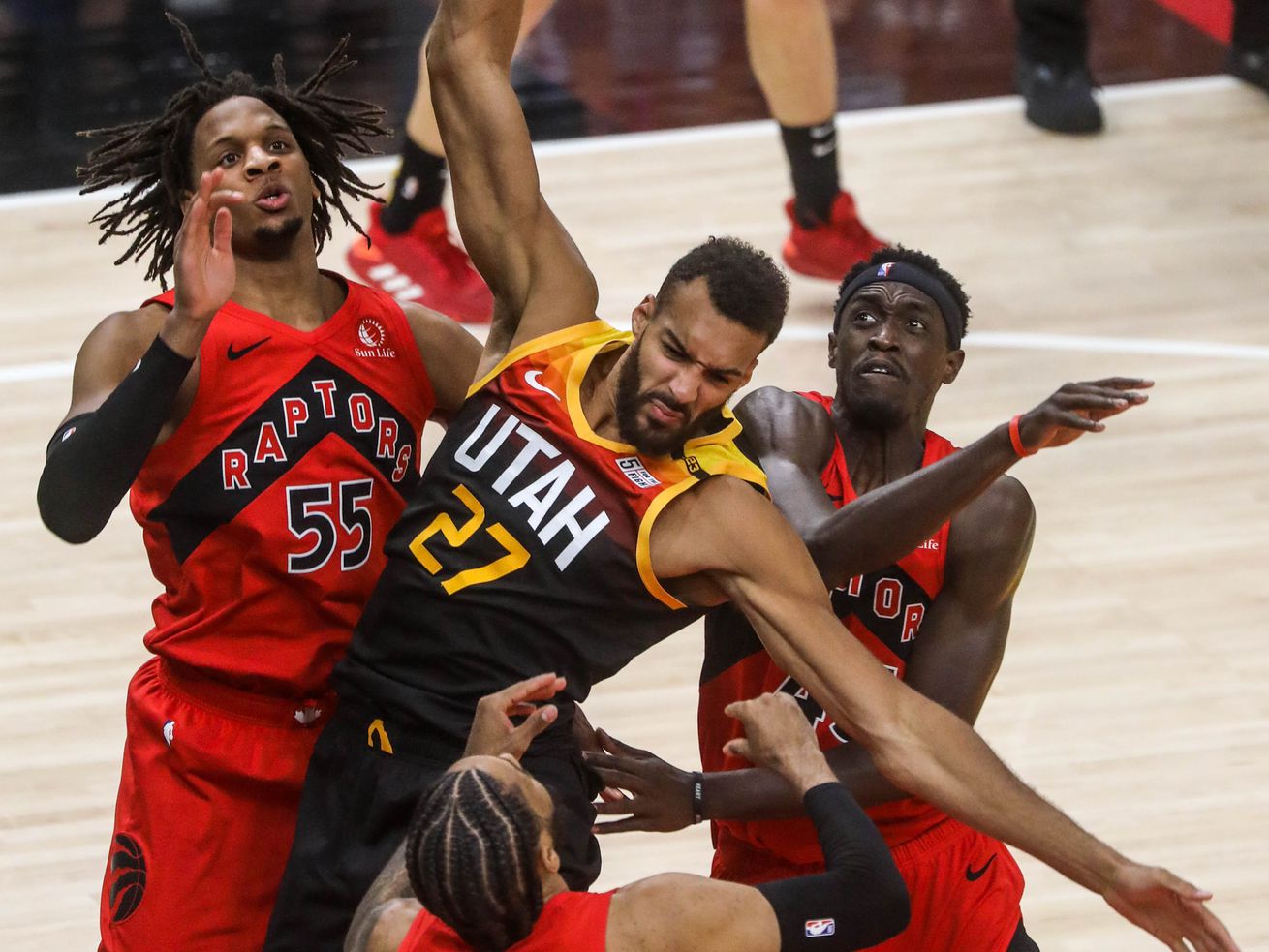 The Utah Jazz overcame a 10-point deficit to the Toronto Raptors at Vivint Arena on Saturday night to rally for a 106-102 victory, moving back into sole possession of first place in the Western Conference with a half-game lead over the idle Phoenix Suns.

Offensively, Rudy Gobert was not sharp on Saturday against Toronto. However, when Utah needed a big play to complete the come-from-behind victory, he came up huge with a tip-in bucket with 24.3 seconds left to put the Jazz ahead 105-100. Gobert fell hard to the floor after the tip-in — his second hard fall to the floor in the fourth quarter — but his commitment to fight through his own struggles and make key contributions was clutch down the stretch.
Bojan Bogdanovic’s assertiveness in the first and third quarters was key in helping the sluggish Jazz keep the game close on a night when defensively it struggled dealing with Fred VanVleet and the Raptors. Bogdanovic scored 17 of his season-high 34 points in the first quarter and then 10 more in the third quarter. He was largely held in check in the fourth, but he did have one key 3-pointer in the quarter that pushed the lead to 101-96.
The first quarter wasn’t a particularly good one for the Jazz as they allowed 33 points to visiting Toronto, but their final offensive possession was a thing of beauty. Jordan Clarkson maintained his dribble the entire possession, eventually bursting past Yuta Watanabe and then throwing down a one-handed hammer dunk on Freddie Gillespie, hanging on the rim briefly for extra effect as his Jazz teammates on the bench jumped out of their seats.

Defensively, the Jazz made huge strides after halftime to fight back into the game. After allowing 62 points to Toronto in the first half, Utah buckled down and limited the visitors to 40 points in the second half and just 13 in the fourth quarter.
Trent Forrest played 15 minutes and provided a solid spark off the bench with his defense and his ability to get the Jazz into the offense at times. He even managed to make a 3-pointer, the biggest part of his game he needs to develop in the future if he hopes to be a rotation player on a full-strength squad.

“He‘s big time for us. Whenever he stepped on the court we got something from him,” said Bogdanovic.

Low notes
The Jazz committed an eye-popping 21 turnovers against the Raptors, which led to 27 points. They were still able to overcome all the miscues for the victory, but not having the ball handling of Mike Conley and Donovan Mitchell on the floor made a big difference in the offensive execution.

“They’re so quick and athletic and apply …read more