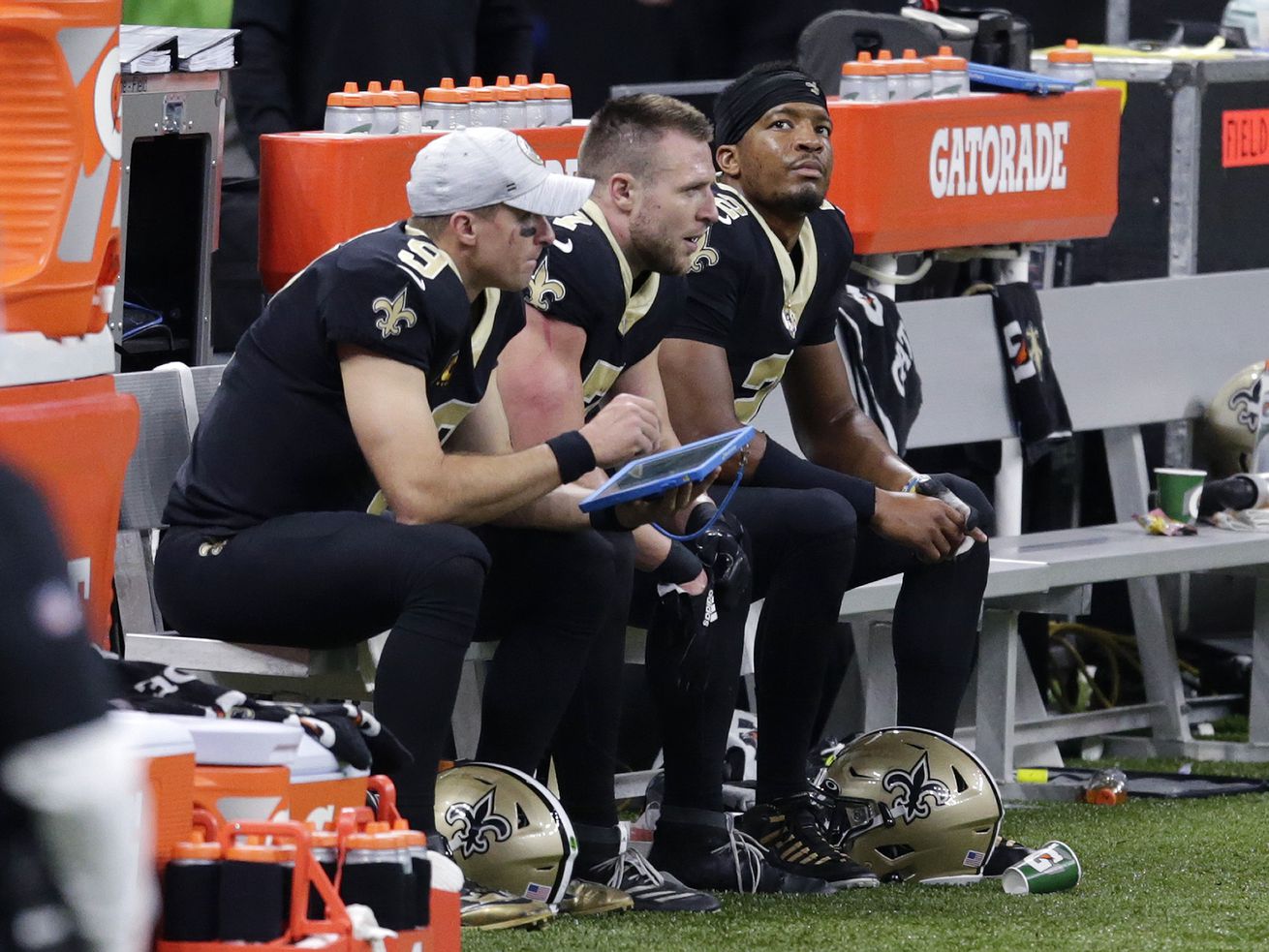 New Orleans Saints quarterbacks Drew Brees (9), Taysom Hill (7) and Jameis Winston (2), sit together on the bench in the second half of an NFL football game against the San Francisco 49ers in New Orleans, Sunday, Nov. 15, 2020. | Butch Dill, Associated Press

There is no clear timetable right now for when Drew Brees will return to quarterback the New Orleans Saints, after he exited the game at halftime of the team’s 27-13 win over the San Francisco 49ers on Sunday.

On Monday, ESPN’s Ed Werder reported that medical evaluations revealed the All-Pro quarterback had five fractured ribs and a collapsed lung. On Tuesday, Werder said Brees is seeking a second opinion, which will help decide if he should be placed on injured reserve. That designation would mean Brees would miss at least three games.

The scans showed five definite rib fractures but a source mentioned the possibility there might be even more. The opinion of additional doctors will help decide whether Brees should be placed on injured-reserve, a designation that would result in him missing at least three games.

Brees’ injuries reportedly stem from hits he took in two different games — during the Saints’ game Sunday against San Francisco and the week before against Tampa Bay.

High school basketball begins this week. Read up on every team in the state

That sets up the scenario where the Saints will be going with either Jameis Winston, a one-time starter in Tampa Bay, or former BYU standout Taysom Hill at quarterback until Brees returns.

“The longer-term plan was, assuming Drew Brees probably only had one year left, that Jameis Winston and Taysom Hill would have a legit competition in 2021 to see who the quarterback off the future was. … Obviously you accelerate that now,” NFL Network reporter Michael Silver said during a program segment Tuesday.

The plan was for Jameis Winston and Taysom Hill to compete in 2021. Now, with Drew Brees out, that process has been accelerated. From earlier on NFL Now @nflnetwork @AndrewSiciliano @wyche89 @MarcRoss pic.twitter.com/0zF1VDMlr0

New Orleans went through a similar situation last year, when Brees missed five games with a thumb injury and Teddy Bridgewater took over the offense. Bridgewater led the Saints to a 5-0 record.

How do the Winston and Hill compare as fill-in starters for Brees this season? Here’s a quick comparison:

Winston is more experienced, going 28-42 as a starter since entering the league as the No. 1 overall pick in …read more