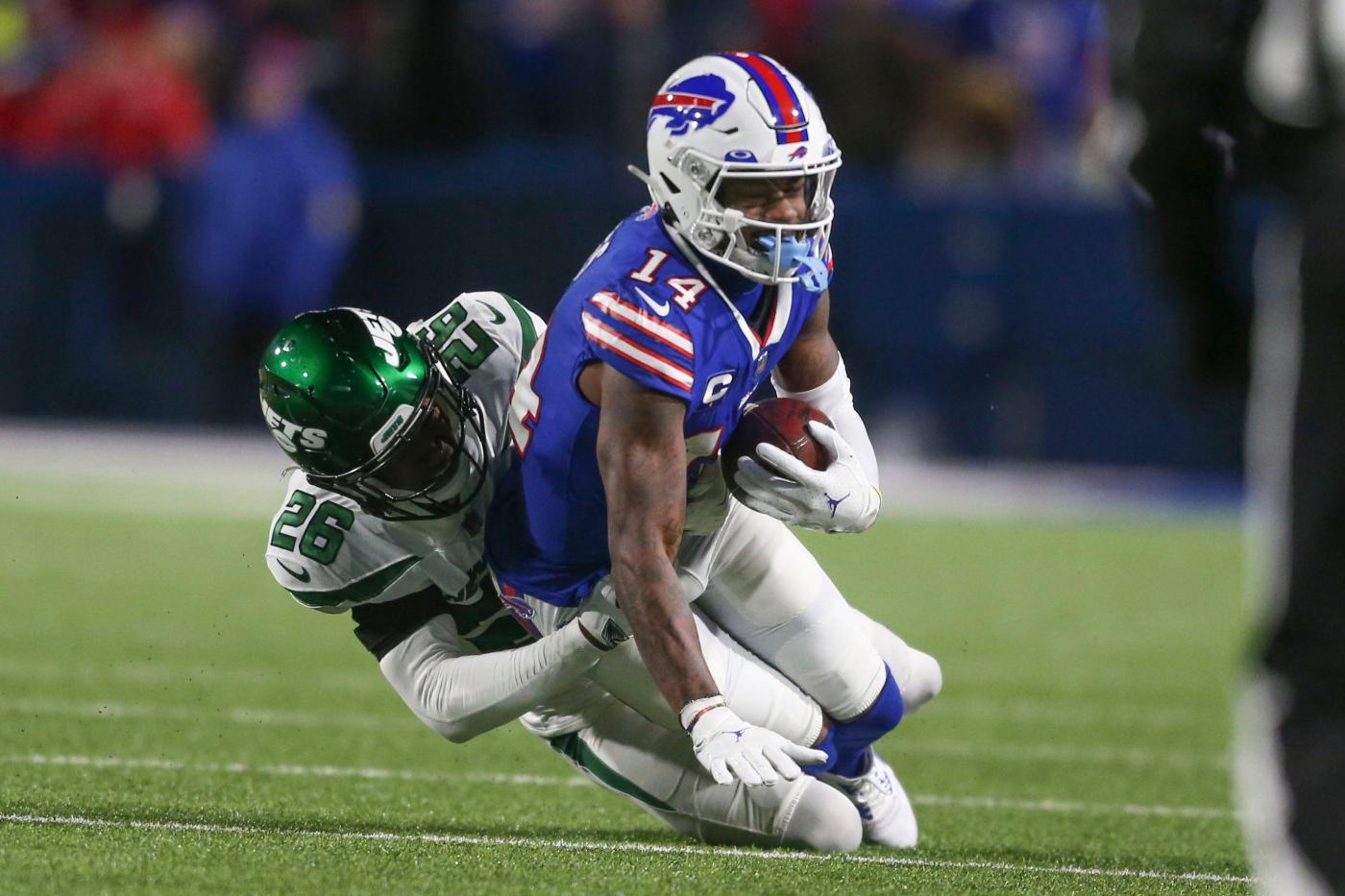 The Jets cornerbacks stood out in the Jets’ season finale 27-10 loss at the Buffalo Bills.

Josh Allen completed 53% of his throws with 45 attempts for a 5.3 yards per average. The main reason why was the Jet cornerbacks holding up in coverage forcing Allen into tough throws.

After falling behind 10-0 the Jets defense tightened up and forced eight Bills punts on 10 following possessions. And it began with sticky coverage from the defensive backs.

“It’s just a matter of hunkering down and executing our jobs, winning some one-on-one’s, making it harder for the quarterback to throw the ball in terms of getting tighter with our windows and making the quarterback throw accurate in windy conditions,” coach Robert Saleh said. “We felt like, because of the aggression with regards to the way we were covering today, it made him throw perfect. In these conditions, it’s hard to do that, so really, really pumped up for the defense. I thought they played their absolute butts off. The final stats don’t look like that, but if you just watch the tape, it was tough sledding.”

Let’s start with the Jets No. 1 cornerback, Bryce Hall. Against the Bills Hall was targeted 12 times and allowed only three completions for 50 yards according to Next Gen Stats. And the average separation rate was 1.9. The league average for receivers is 2.9.

That’s good work from the second year corner. Hall was almost beat by Gabriel Davis for a long touchdown on an out and up late in the second quarter. But the pass fell out of bounds.

Mike Preston: With so many NFL openings, it’s past time for more Black coaches to be hired | COMMENTARY

Sometimes it’s better to be lucky than good.

Brandin Echols was matched up on Stefon Diggs throughout the game and sometimes followed him. Echols did a solid job against a former All-Pro receiver. Echols was targeted 11 times and allowed five receptions for 33 yards.

Nickel corner Michael Carter II produced a few third down stops with his coverage. Carter II finished with a pass breakup and forced another incompletion—both on third downs. Carter II was victimized by Bills tight end Dawson Knox for a 28-yard reception.

The most impressive stat was Allen on throws with three yards or less of separation. He went 14-for-32 for 136 yards with one touchdown. It was an off day for Allen and the Jets cornerback played a major part in it.

Was it all perfect? No. But they played well. Credit to the group.

There was no Elijah Moore, Corey Davis or Braxton Berrios. And Jamison Crowder re-injured his calf in the first half against the Bills. So with limited throwing weapons the offense needed their rushing attack, but they only mustered 48 yards with a 2.8 yards per carry average.

Michael Carter led the way with 19 yards on nine carries.

The run game was necessary for Zach Wilson. But without it, he had no shot. And it showed as he went 7-for-20 for 87 yards with one touchdown and was sacked …read more