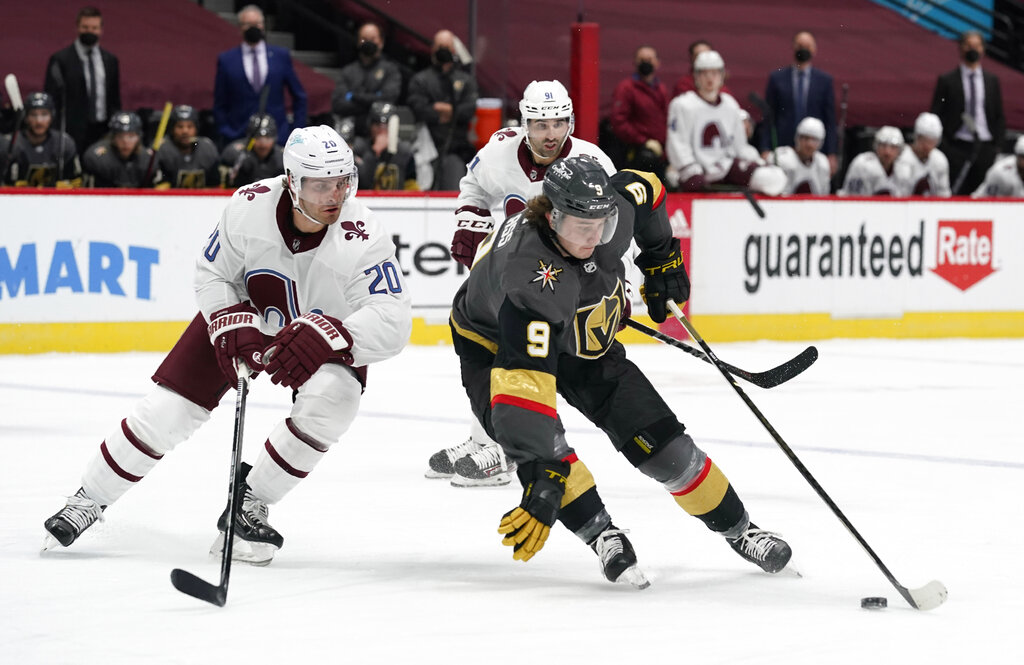 The fourth and final meeting of a four-game West Division heavyweight tilt went to the Vegas Golden Knights, who defeated the Avalanche 3-0 on Monday night at Ball Arena to salvage a split of the series.

Three Vegas forwards had big games and goalie Marc-Andre Fleury made several outstanding saves en route to his second shutout over the Avs since last week’s “series” opener in Las Vegas. Alex Tuch had two goals, William Karlsson had two primary assists and Jonathan Marchessault scored the Knights’ third goal in a nine-minute span of the second period which served as the key stretch of the game.

It was the Avs’ first home loss since opening night on Jan. 13 when they fell 4-1 to the St. Louis Blues. Colorado had won five-straight home games, the longest streak in the NHL, and it included Saturday’s 3-2 victory over Vegas in Lake Tahoe which counted as an Avalanche home game.

Colorado entered Monday outscoring its opponents 23-6 during the home winning streak (20-4 at Ball Arena). The Avs, who also play the Minnesota Wild at Ball Arena for a makeup game Wednesday, fell to 6-2-1 in their last nine games overall.

Avs star center Nathan MacKinnon, who was the player of the game in Saturday’s outdoor game, was relatively quiet in his 539th NHL game — all with the Avs — to surpass Paul Stastny for 10th-most games played in an Avalanche jersey.

Marchessault scored Vegas’ third goal at 11:06 of the second period. His wrist shot from between the circle beat goalie Philipp Grubauer to the stick side. Karlsson set the play up from the sideboards with a short headman pass — his second of the period.

Kiszla vs. Chambers: Is it too late for Avalanche’s Nathan MacKinnon to jump into the MVP race?

How the Avalanche overcame frustration of 8-hour sun delay for outdoor game victory: “I thought we were just going to grind it out”

Grading the Week: How do you like Philipp Grubauer now, Avalanche fans?

Tuch broke through twice after neither team struck in the opening 20 minutes. Tuch’s first came on the power play at 2:53 into the middle frame. He accepted a short pass on the Avs’ blueline from Karlsson, split defenders Ryan Graves and Tyson Jost to the net, and beat Grubauer on the breakaway. Avs defenseman Conor Timmins …read more