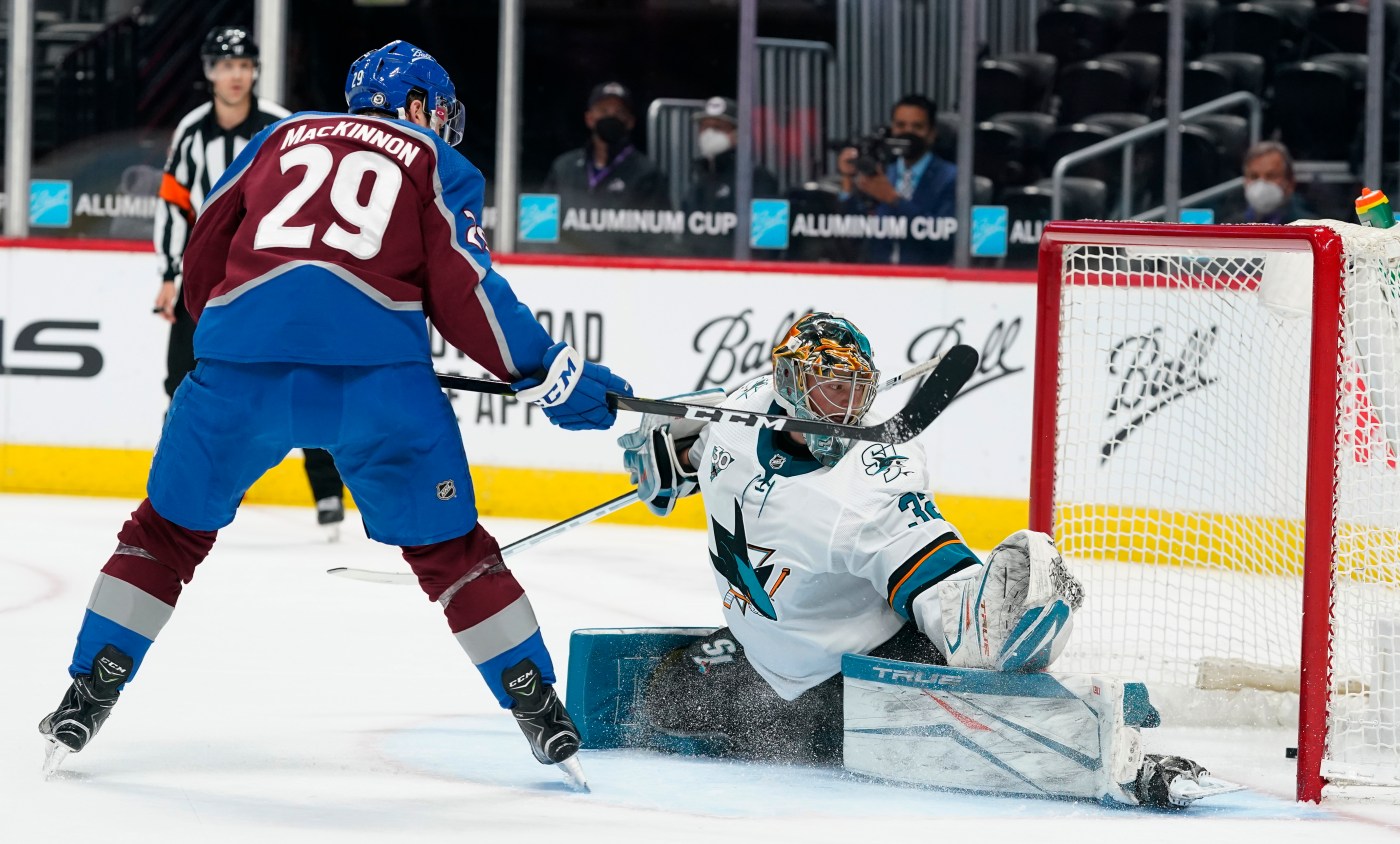 The San Jose Sharks received a standout performance from goalie Josef Korenar but couldn’t turn that into a win over the Colorado Avalanche.

Alexander Barabanov, Logan Couture, and Tomas Hertl all scored, but the Sharks allowed two third-period goals in what turned into a 4-3 loss to Avalanche at Ball Arena on Saturday.

Evander Kane earned his 500th career NHL point, as he assisted on Couture’s goal that cut Colorado’s lead to 3-2 at the 9:55 mark of the third period.

Mikko Rantanen scored with 4:26 to go in regulation time to get the two-goal lead back for the Avalanche, which swept the two-game series. The two teams meet again for two games in San Jose on Monday and Wednesday.

Hertl scored with 2:13 to go in the third period, but the Sharks could get no closer.

Korenar stopped 34 of 36 shots in the first two periods but couldn’t continue to hold off the Avalanche. Korenar finished with 40 saves.

The Sharks were outshot 21-4 in the second period and trailed 2-1 after 40 minutes.

The only reason why it was still a one-goal game was the play of Korenar, whose saves including a handful of the spectacular variety. One near the end of the second period came as he stretched his right pad out to stop a shot from in close on Rantanen.

Barabanov’s goal opened the scoring at the 4:25 mark of the second period, as he took a pass from Tomas Hertl for his second goal in three games in San Jose. It was the Sharks’ first power-play goal since April 10, a stretch of 10 games.

The Avalanche dominated the rest of the period, outshooting the Sharks 16-3 along the way.

Nathan MacKinnon’s goal at the 13:08 mark of the second period came on a back door tap-in after a nice pass from Conor Timmins, and Andre Burakovsky scored 2:58 later after he fired a wrist past Korenar from the top of the circle after the Sharks lost a faceoff.

MacKinnon was held without a shot on goal Friday night for the first time in 263 games but had eight through two periods Saturday.

Korenar was making his fourth start in six games for the Sharks, as he entered Saturday with a 2-3-0 record, a .893 save percentage, and 3.03 goals-against average. He helped the Sharks sweep a two-game series with the Arizona Coyotes earlier this week, stopping a combined 49 of 55 shots.

Korenar made 15 saves in the first period as the two teams were tied 0-0 after 20 minutes.

The Sharks were playing against goalie Devan Dubnyk for the first time since they traded him to the Avalanche on April 10 for defenseman Greg Pateryn and a 2021 fifth-round draft pick.

Dubynk went 3-9-2 for the Sharks with a .898 save percentage and a 3.18 goals-against average. His also made an impact off the ice, as he fit in seamlessly with a Sharks group that was looking to correct some team culture issues that festered throughout the 2019-2020 season.

In four games with the Avalanche prior to Saturday, …read more