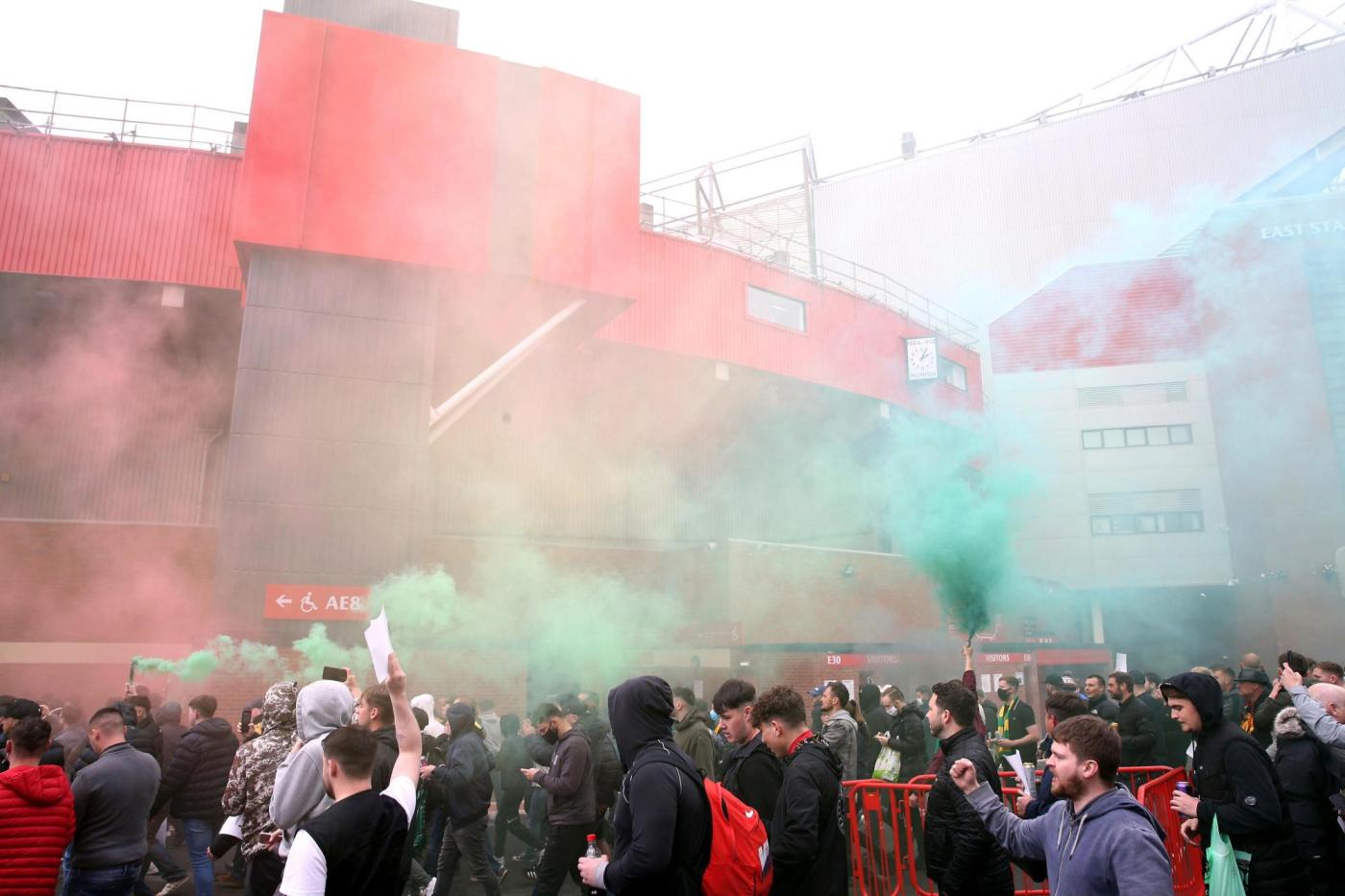 MANCHESTER, England — Anti-ownership protests by Manchester United fans forced the postponement of a Premier League game on Sunday against Liverpool after the stadium was stormed and thousands more supporters blocked access into Old Trafford as they demanded the Glazer family sell the club.

The unprecedented cancelation of a game in the world’s richest soccer league due to fan protests is the culmination of long-running anger against the American owners that began with a 2005 leveraged takeover that loaded debt onto the club. But the wrath of supporters has boiled over in the two weeks since the New York Stock Exchange listed club was part of the failed European Super League breakaway that collapsed amid a groundswell of condemnation.

Supporters gaining access to the pitch — before the two teams even traveled to Old Trafford — was even more startling given the strict coronavirus measures in place around the stadium that keep games closed to any spectators. One of the flares set off by fans was launched into the stands where the Sky Sports television team was already broadcasting more than two hours ahead of the scheduled kickoff.

Although the protest had been announced in advance, the stadium forecourt on Sir Matt Busby Way was still able to be accessed by thousands of fans — many chanting “We want Glazers out” as flares were set off.

The crowd was only dispersed after baton-wielding police and officers on horseback charged fans as clashes erupted under a shower of flying glass bottles about 20 minutes before the game was due to have started. Two police officers were injured and one required emergency treatment for a “significant slash wound to his face” after being attacked with a bottle, the Manchester force said.

If Aaron Rodgers is traded, could Broncos’ Drew Lock be the Packers’ next QB? Here’s what one oddsmaker says.

United said the game was postponed “due to safety and security considerations around the protest” after discussions with police, authorities and the league.

“Our fans are passionate about Manchester United, and we completely acknowledge the right to free expression and peaceful protest,” United said in a statement. “However, we regret the disruption to the team and actions which put other fans, staff, and the police in danger. We thank the police for their support and will assist them in any subsequent investigations.”

The Premier League, which has yet to announce a new date for the match, expressed concern about the disorder. Protesters had also gathered outside the United team hotel in central Manchester.

“The security and safety of everyone at Old Trafford remains of paramount importance,” the Premier League said in a statement. “We understand and respect the strength of feeling but condemn all acts of violence, criminal damage and trespass, especially given the associated COVID-19 breaches. Fans have many channels by which to make their views known, but the actions of a minority seen today have no justification.

“We sympathize with the police and stewards who had to deal with a dangerous situation that should have no place in football.”

Supporters wore green-and-gold scarves and also set off flares in the colors of the club’s 1878 formation. It was a …read more