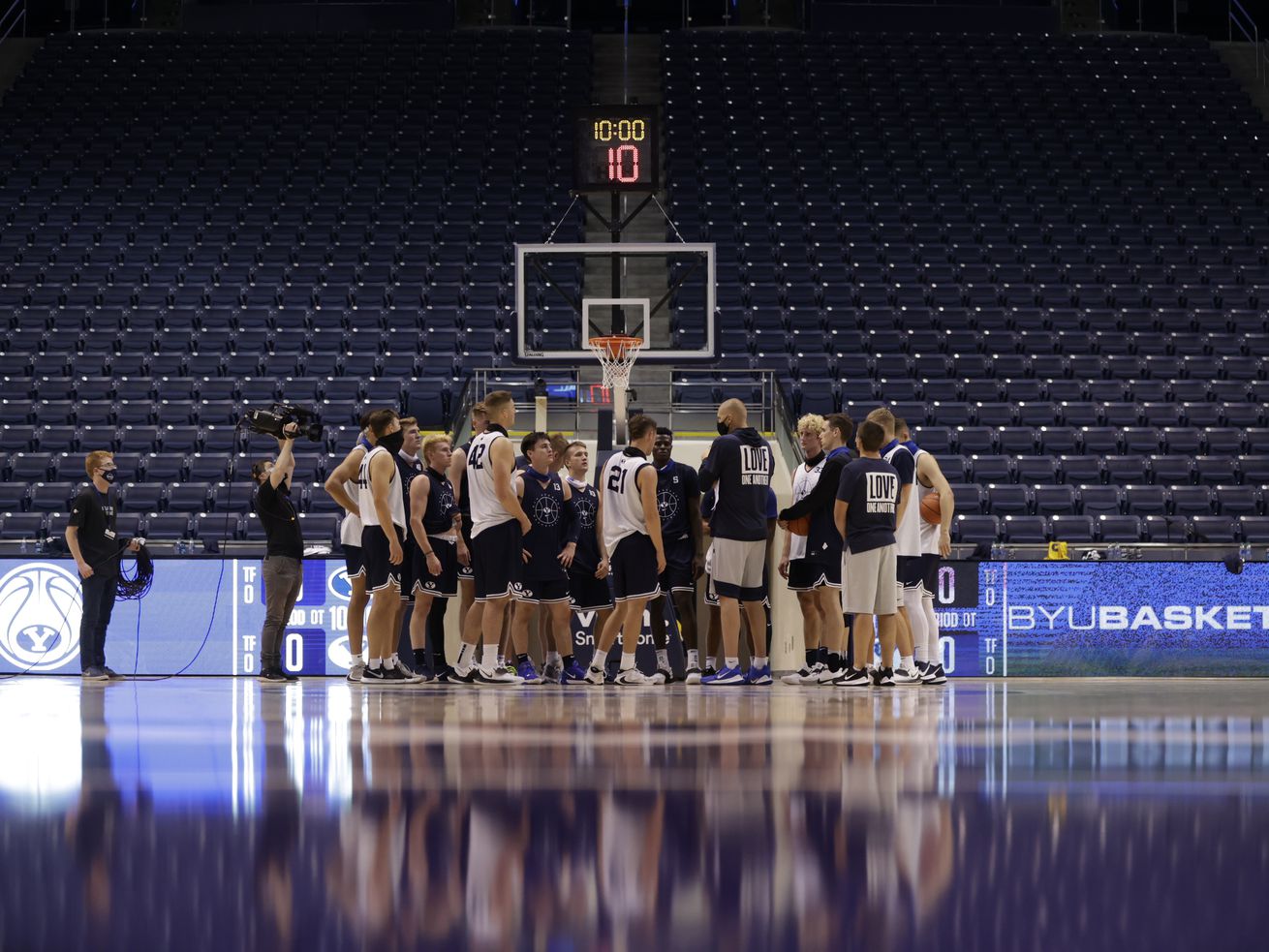 Coach Mark Pope did the next best thing — he brought the Cougars’ first day of practice to the people.

Due to the pandemic, BYU basketball coach Mark Pope couldn’t stage a Midnight Madness like he did last season as a way to revel with fans in the start of a new season.

So he did the next best thing — he brought the Cougars’ first day of practice to the people.

BYU’s spirited, 90-minute evening session Wednesday night at the Marriott Center, as part of two-a-day practices, was broadcast via the internet, capitalizing on the school’s vast broadcasting capabilities.

#BYUHoops Practice is Live NOW! Go to the link or the BYUtv App to watch https://t.co/jKH7xZQPFk

“In terms of trying to grow that connection as quickly as we can, it’s really important to us. I also like the idea of my guys being in the gym where there’s an event like this where they’re getting analyzed and critiqued and they kind of have the lights on them — the best we can put on them right now and have them feel some of that juice.”

It was an innovative way for Pope to introduce his team, which is full of newcomers like 7-foot-3 Purdue transfer Matt Haarms and 5-foot-11 Utah Valley University transfer Brandon Averette.

Haarms thought it was a great idea.

“I think it’s an awesome way for the fans to connect with us. You always get that fan day or that Midnight Madness, but of course we’re not going to have that this year,” Haarms said. “We may as well do it in a different way. It’s a fun way to connect with the fans and show them our personalities. You can see us interact with each other and the coaching staff.”

Wednesday marked BYU’s first official day of practice since the NCAA Tournament was canceled last March. The Cougars finished with a 24-8 record and were projected to be invited to the Big Dance as a single-digit seed.

The 2020-21 season is scheduled to tip off Nov. 25. While the Cougars haven’t released their complete non-conference schedule yet, senior guard Alex Barcello was thrilled to be back practicing at the Marriott Center with his teammates.

“I have a feeling of being blessed to be in this program and to play for such a great coaching staff and have this group around me,” he said. “Obviously, last year didn’t end up how anybody wanted it to. That left a sour taste in our mouth, but we can’t hold on to that. We’ve got to move on and we have this upcoming year and games ahead of us. We’re doing everything we can to prepare for those games.”