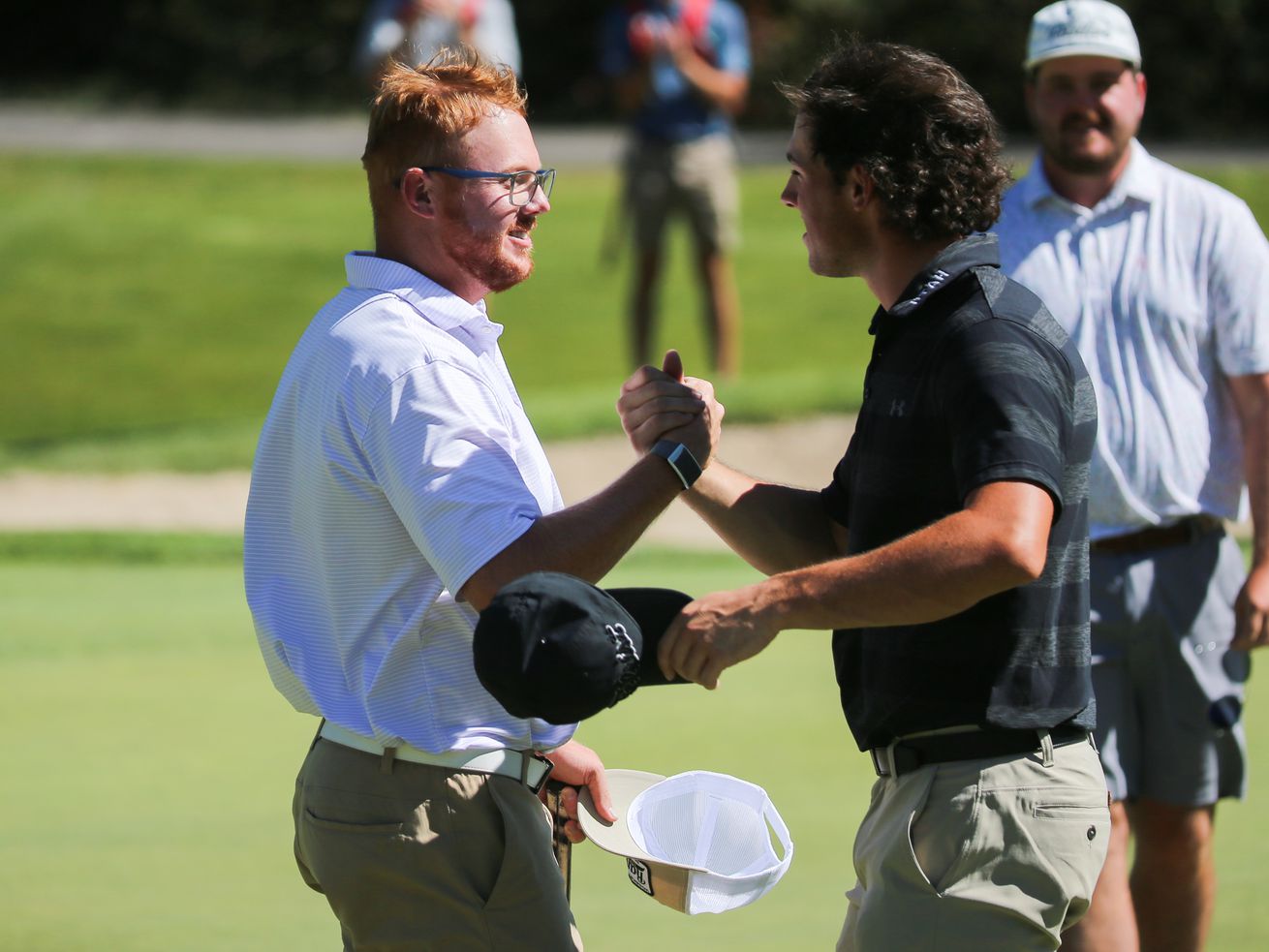 PARK CITY — It could have been just another qualifying day for the University of Utah golf team or a friendly round between two good buddies Saturday at Jeremy Ranch Golf & Country Club. Mitchell Schow and Blake Tomlinson have played together on the Ute golf team for three years, and Saturday they laughed and talked and walked together as they have hundreds of times before.

Only this time it was a bigger deal. It was the finals of the 122nd edition of the Utah Men’s State Amateur, a tournament that has been played every year since 1899, more consecutive years than any golf tournament in the world. It also featured a gallery of friends and family, including 10 members of the Ute golf team with a lot of folks wearing red and white and one cart displaying a large Utah flag waving in back.

“It was fun, we were laughing the whole day, but when it came down to it, we were serious and it was a good competitive match. Mitchell beat me today, all credit to him, he’s a great guy and a great golfer.” — Blake Tomlinson

In the end, Schow was slightly better on this day as he took a 3 and 2 victory over Tomlinson to claim the coveted trophy.

“We ate lunch together, we were joking around the whole time, basically like a normal qualifying round we’d have for the U,” said Schow, who moved to Park City from Ogden in ninth grade. “There was that added pressure it was for the State Am, but it was pretty relaxed and we were trying to play some good golf.”

“It was fun, we were laughing the whole day, but when it came down to it, we were serious and it was a good competitive match,” Tomlinson said. “Mitchell beat me today, all credit to him, he’s a great guy and a great golfer.”

The day before, both golfers had to endure extra-hole matches as Schow went 21 holes to beat Hayden Christensen, while Tomlinson took 20 holes to edge Jake Vincent.

The final didn’t have the drama of those matches as Schow got hot in the morning 18 holes when he ran off a streak of five straight hole wins to take a 5 up advantage and then held off a Tomlinson rally in the afternoon.

While the two players are evenly matched (their averages on the Utah golf team this year were 71.6 for Schow and 72.3 for Tomlinson) they have different styles. Tomlinson hits the ball as far as anyone in Utah, this side of PGA Tour player Tony Finau, and a couple of his drives Saturday measured in the 375- to 385-yard range. Schow hits it plenty long, but relies more on his straight shots and consistent play.

“He doesn’t have …read more