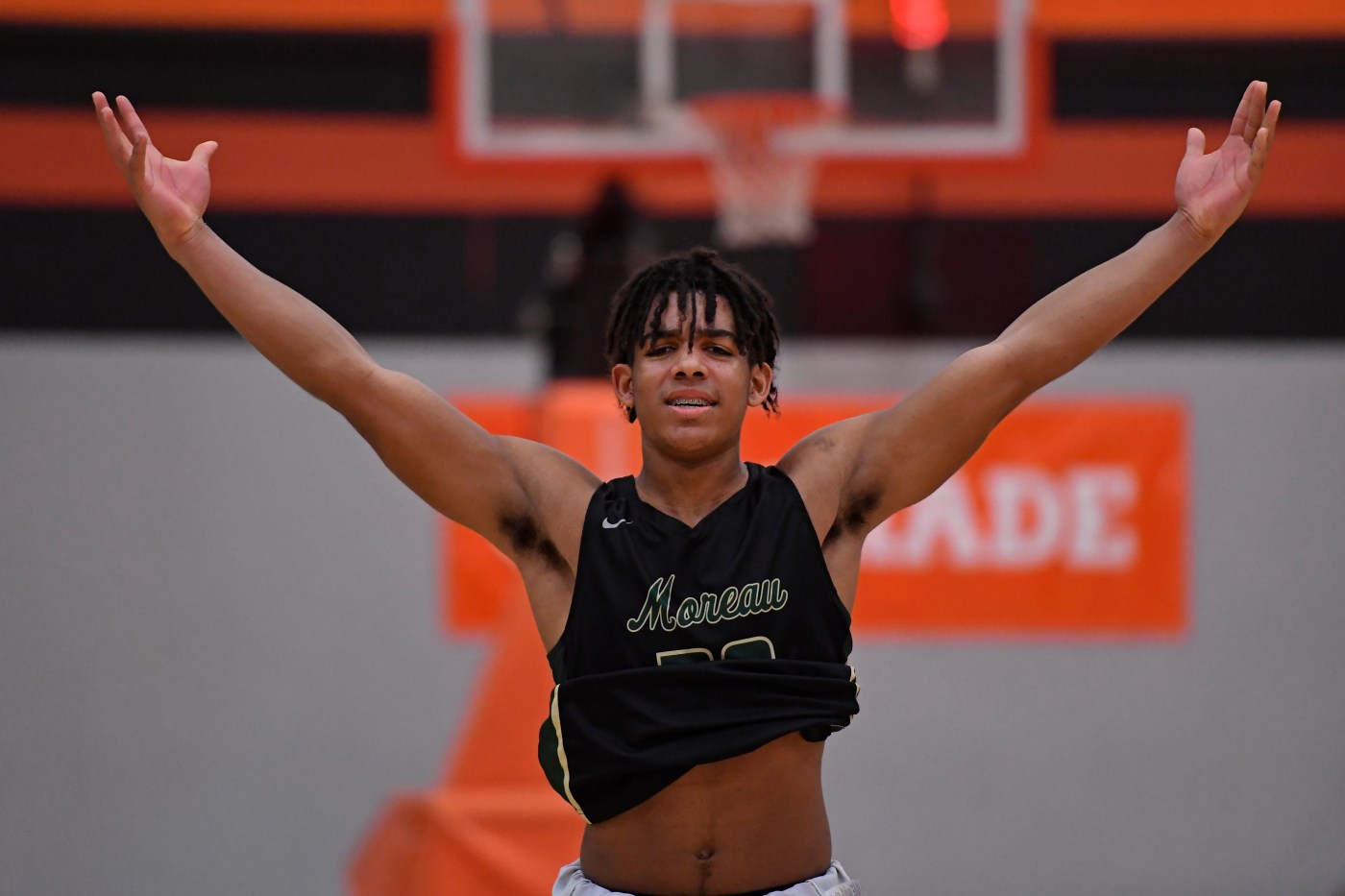 CLICK HERE if you are having a problem viewing the photos on a mobile device.

FREMONT — For more than a decade, the Mission Valley Athletic League was a one-school race in boys basketball. Newark Memorial’s dominance included 14 league titles in 15 seasons and a 101-game winning streak in MVAL play.

But in the eight years since Moreau Catholic rejoined the league, the pecking order has changed.

Washington of Fremont tried to keep Moreau in the runner-up position Friday night but fell short as the Mariners — one year removed from winning a North Coast Section championship — celebrated a 65-55 victory over its hosts that left both teams as co-league champions.

For Washington, the consolation prize was trying to remember that it had already ended the program’s quarter-century league title drought before it stepped onto the court Friday

The Huskies will add 2020 to a championship banner that has not been updated since the school’s last title in 1995.

Of course, Washington wanted more than a co-title on its Senior Night, but Moreau used its size advantage near the basket to dominate with a steady stream of dunks, rebounds and put-backs.

“It’s unbelievable,” Moreau coach Frank Knight said. “It feels so good. Like I’ve said, people had us picked to come in fourth in the league before the season started. We lost 95 percent of our scoring, six seniors. We didn’t even know what it takes to win. They figured it out. It feels good to get at least co-champions.”

DJ Johnson, a 6-foot-7 junior, led Moreau with 14 points and a couple of slams, including one in warmups that led to two Washington free throws before the game even began.

A tough start for a team that was missing the coach’s son, guard Trey Knight, who rolled his left ankle against Mission San Jose on Tuesday.

But, as it turned out, no hurdle was too tall for the Mariners on Friday.

They got Washington (20-6, 12-2) into foul trouble and took control in the second half to avenge a tight loss to the Huskies in Hayward last month.

“We knew we had a size advantage,” Frank Knight said. “With Trey being out with the ankle injury, we knew we had to pound it inside and make an effort on the glass. It was really a team effort on that end.”

Moreau also got 12 points — all on 3-pointers — from Donovan Tynes and 11 points from Kaleb Elarms Orr.

“We went through film, practices, hills, running,” Johnson said. “It just all feels good to pay off. We got this co-championship. I am proud of my team.”

Washington won’t have to search long to analyze this one.

The Huskies finished 10 of 22 from the free-throw line and two starters, Austin Belentine and Josep Mangonon, had to sit extended periods because of foul trouble.