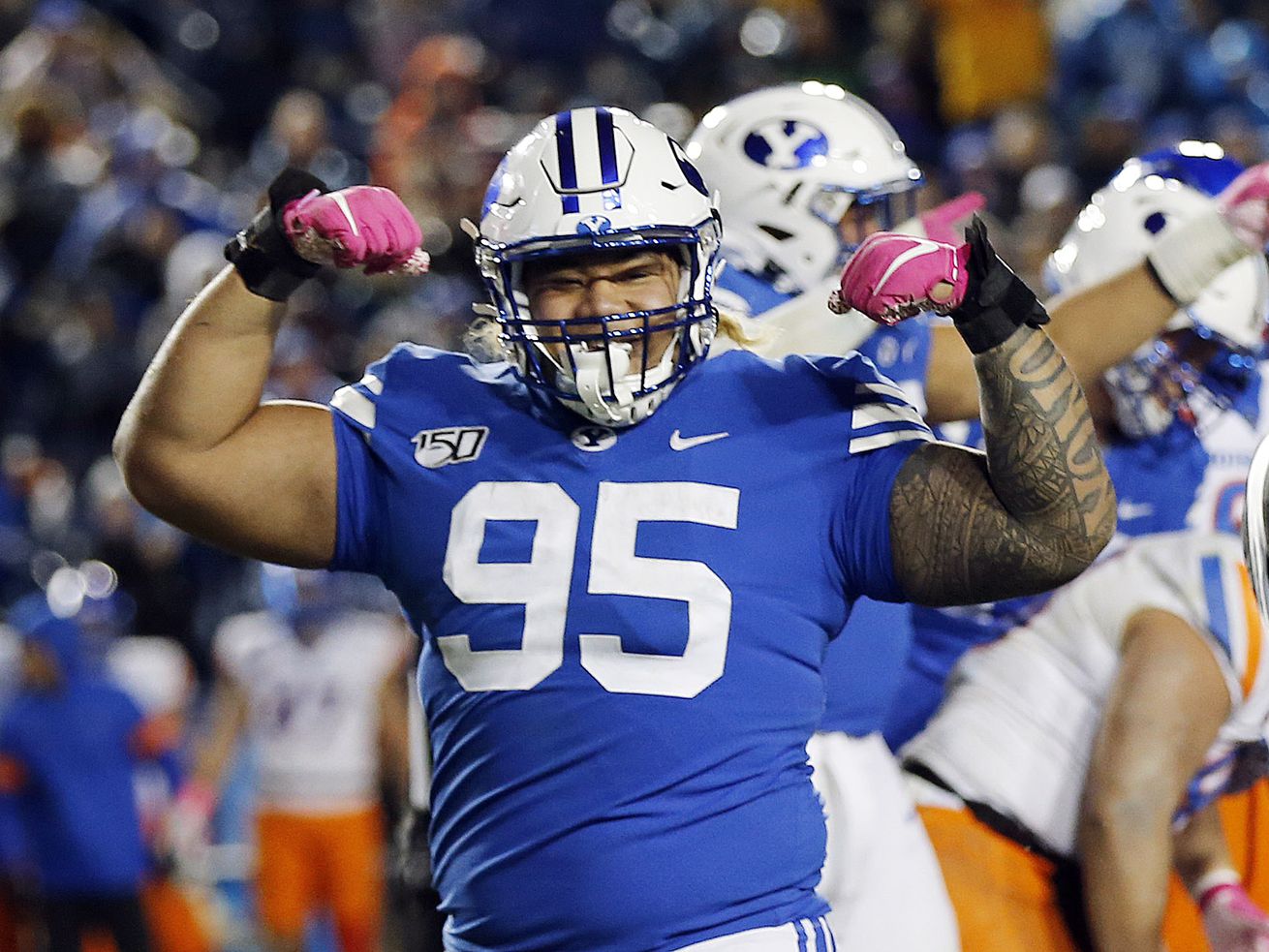 Brigham Young Cougars defensive lineman Khyiris Tonga celebrates a first down in the closing minutes against the Boise State Broncos during NCAA football in Provo on Saturday, Oct. 19, 2019. Tonga, a Granger High product, could be a Day 3 selection in the 201 NFL draft. | Ravell Call, Deseret News

Another Utah connection had his name called during the 2021 NFL draft on Friday, when former BYU and Bountiful High offensive tackle Brady Christensen was selected by the Carolina Panthers during the draft’s third round.

Combine that with quarterback Zach Wilson (BYU and Corner Canyon High) and offensive tackle Penei Sewell (Desert Hills High) going in the first round, and it’s been a solid draft so far for Utah-developed talent.

It looks like Day 3 — the final four rounds of the draft — could also be a good day for Utah ties. There are 154 picks remaining on the draft’s final day — it begins at 10 a.m. MDT, on ESPN, ABC and NFL Network — and Utah guys like defensive tackle Jay Tufele (Bingham High) and wide receiver Simi Fehoko (Brighton High) are rated among the best available at their positions.

How many will ultimately get drafted? That’s the big question.

Tufele, the former USC star, was seen as a strong Day 2 possibility going into the draft. He should be an early Day 3 pick, though: Fox Sports (No. 5) and Sporting News (No. 7) both have him as a top 10 available prospect overall heading into Saturday, while ESPN has him at No. 12 overall. Bleacher Report also tabs Tufele as the best run stopper available at defensive tackle.

From Rob Rang, Fox Sports: “A bowling ball of butcher knives just scratching the surface of his potential, Tufele would almost surely have heard his name called in the Top 100 had he not opted out on the season. He did it for all the right reasons, however, with his sister contracting COVID and spending months in ICU, leaving her “little” brother understandably needing time with family. If teams are sure he is locked in and in shape, Tufele won’t be on the board long, as his quickness and power are starter-worthy.”

Fehoko, who left Stanford following a standout junior season, is expected to be drafted, though where he ranks varies quite a bit from the national outlets. Fox Sports has him at No. 10 available overall on its big board, and Bleacher Report puts Fehoko as the fourth-best available wide receiver. ESPN, meanwhile, has him as the No. 81 prospect overall, which would tab Fehoko somewhere as a late fifth or early sixth-round pick.