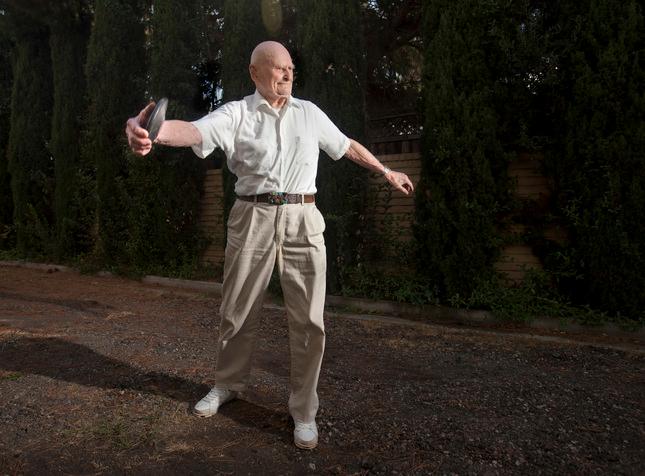 SANTA CLARA — Many wondered how Don Pellmann could sprint, jump and throw at track and field meets at the age of 100 years old when most people are sedentary.

Pellmann, who died last month at 105, sure had been doing something right.

Five years ago, Pellmann became the first centenarian to run faster than 27 seconds in the 100 meters and the first to clear a height — any height — in the high jump. He also broke records in the discus, long jump and shot put at the San Diego Senior Olympics in 2015.

The family has been recalling these and other exploits in the aftermath of Pellmann’s death. Son Jim Pellmann of San Jose said his father broke a hip during a fall in July and then developed neurological complications after surgery. Don Pellmann died Oct. 11.

Pellmann, who moved to the Bay Area in 2003 with his wife Marge to be closer to two sons, had been living in a Santa Clara assisted living facility for the past five years.

Pellmann had requested his body be donated to the Stanford medical school for research, the family said. Jim Pellmann said university officials are not accepting bodies during the COVID-19 pandemic.

Don Pellmann, who grew up in Milwaukee, lived through two World Wars and the 1918 flu pandemic in which he remembered some family members getting sick, the family recounted.

Pellmann once recalled dropping out of La Crosse State Teachers College after his freshman year because of financial struggles during the Great Depression.

Pellmann said he launched a career in 1936 as a tool and die maker after working many odd jobs to get by. He eventually worked at an aircraft supercharger plant in Wisconsin that built components for bombers and fighter jets. Pellmann said the job kept him home during the Second World War.

He once told a visitor at his assisted living facility that he also worked at General Motors helping develop airbags and then worked on the Apollo program’s navigational guidance systems.

Pellmann said he retired at age 57 and moved to Arkansas where he dived into all sorts of hobbies, including bowling.

The pursuit of masters track and field medals began at age 70 when son Ned Pellmann suggested his father enter a Senior Olympics event in Arkansas. Don Pellmann recalled in 2015 that he defeated the state champion in his age group in five events.

“I was a basket case,” he said of feeling exhausted afterward. “I could barely get into the car.”

Pellmann recalled that he would need to get into better shape if he planned to continue in the sport. So, the retiree had another goal to reach.

Pellmann developed into a world-class masters competitor who won some 900 medals. His first national event came in 1997 at age 81, the family said. He won eight events that day.

Pellmann continued competing until 2015. The older he got, the fewer competitors he faced until being the lone centenarian …read more