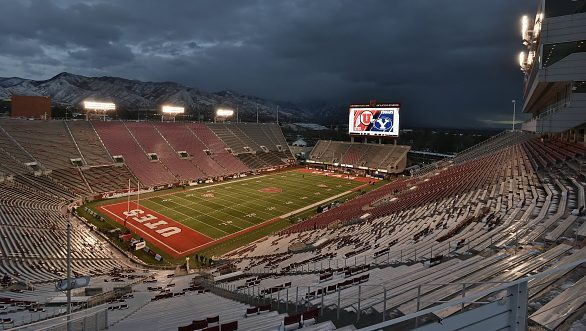 A quick-hitting preview of key storylines across the Pac-12 …

There will be football.

The Utes are the only team in the country that hasn’t set foot on the field after a COVID-19 outbreak forced two cancellations (against Arizona and UCLA).

But they have tested negative all week, restocked their roster with players out of quarantine … and are set to play Saturday night against USC.

It will be the first start for one of two transfer quarterbacks, Cameron Rising (Texas) or Jake Bentley (South Carolina).

It will also be 35 degrees (approximately) at kickoff.

Of note: None of the infections that derailed the Utes have been traced to football-related activities. They were all instances of community transmission.

Washington State won’t have quarterback Jayden de Laura, who reportedly tested positive. But the Cougars avoided major contact tracing and quarantine issues and are expected to play Saturday at Stanford.

What time they start is another matter entirely.

Kickoff is currently scheduled for 7:30 p.m. (on FS1), but the curfew imposed by California Gov. Gavin Newsom prohibits all non-essential activity after 10 p.m.

We expect the game to get moved to the afternoon, with the specific window depending on the Fox broadcast schedule.

Redshirt freshman Gunner Cruz is expected to start for WSU. It will be his first collegiate appearance.

UCLA has avoided major contact tracing and quarantine issues and is expected to play Saturday in Eugene.

Whether the Bruins have their No. 1 quarterback is another matter entirely.

Dorian Thompson-Robinson’s availability is reportedly in doubt because of issues related to COVID-19 (i.e., either a positive test or contact tracing).

If he’s unable to play, redshirt freshman Chase Griffin is expected to start.

Thompson-Robinson’s uncertain status points to a developing trend for Oregon, which has experienced good fortune with opposing quarterbacks.

The Ducks opened against Stanford, which was without starter Davis Mills because of a game-day testing mistake.

Then they faced WSU its true freshman, de Laura.

Now, they might dodge another veteran if Thompson-Robinson is unavailable.