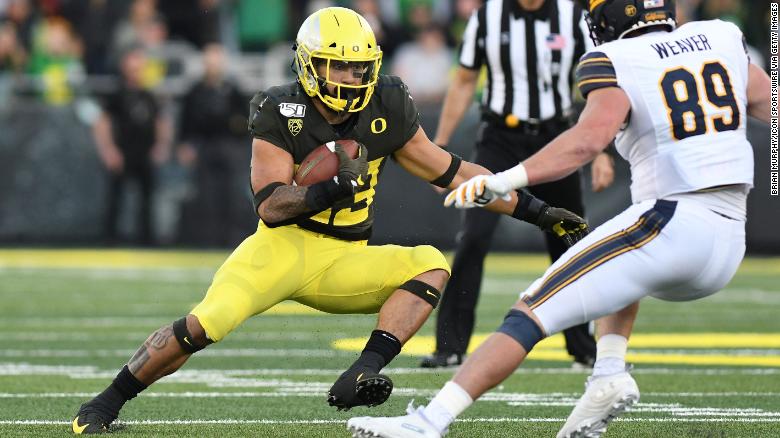 The Pac-12 schedule isn’t stocked with marquee matchups this weekend. But for an audience of 13, there are two games of special significance.

Oregon and USC are the conference’s best bets — perhaps its only bets — to contend for a College Football Playoff berth.

With the first selection committee rankings coming next week, the Ducks and Trojans have one final chance to make a first impression in a year when first impressions are more important than ever.

If the committee values data points and metrics, the Pac-12 is likely doomed. Its champion simply won’t have the same number of games played and quality wins as contenders from other conferences.

But if the committee treats everyone equally, follows its eyes and disregards sample size, then an undefeated Pac-12 champion might have a path into the semifinals.

Once the initial rankings are released, upward movement could be limited because of game cancellations and the paucity of ranked opponents on each team’s upcoming schedule.

The conference championship would provide a resume boost. But by then, it would be too late if the winner isn’t already in close pursuit.

All picks against the spread
Lines taken from vegasininsider.com

UCLA (plus-13.5) at Oregon: Both teams have struggled early in games, then settled into a rhythm. (Second half point totals: Ducks/Bruins 85, opponents 30.) Tough to judge UCLA based on last week because of Cal’s disrupted preparation, but there should be big-play opportunities in Eugene for quarterback Dorian Thompson-Robinson. Key to the game is the Bruins’ ability to keep Tyler Shough in the pocket and react properly to Oregon’s misdirection. Pick: UCLA.

USC (minus-3) at Utah: Massive competitive advantage with the Trojans having played twice and the Utes taking the field for the first time with a roster that’s not at full strength, a new quarterback and a revamped secondary that could lack cohesiveness. The Utes will test USC’s toughness up front. If the Trojans are up to the task physically, they should control the second half. Pick: USC.

Arizona (plus-11.5) at Washington: We were more impressed with Arizona …read more