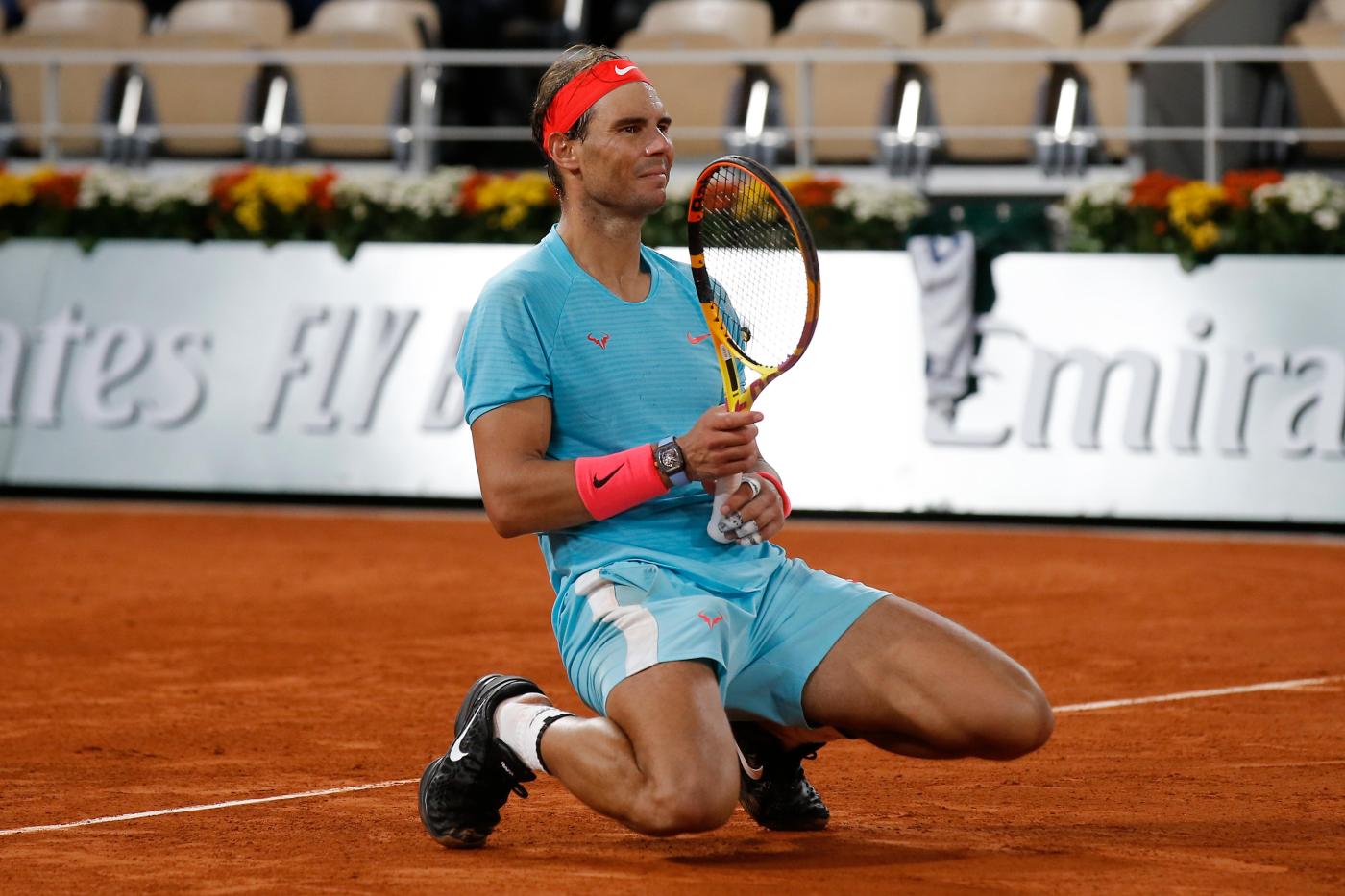 PARIS — All the years of work, all the many wins, led to this moment, with Rafael Nadal preparing to serve against Novak Djokovic, one point from a 13th French Open championship, one point from a 20th Grand Slam trophy to tie Roger Federer’s record for men.

Nadal swept his right foot along the baseline, clearing away the red dust as he has so many times before. He rapped his shoes’ soles with his racket — right, then left, then right again. He discarded one tennis ball behind him, another in the pocket of his blue shorts.

And then, finally ready to proceed, Nadal delivered an ace at 106 mph to cap a flawless performance and a surprisingly lopsided 6-0, 6-2, 7-5 victory over the No. 1-ranked Djokovic. Nadal dropped to his knees, smiling broadly, and pumped his arms.

Neither Djokovic, on this day, nor Federer, over the course of time, ever truly stood a chance of resisting the relentless Nadal.

“He keeps going. No holding him back, it seems like. It’s amazing. I mean, I admire all his achievements, especially the one here,” said Djokovic, who had won his last five Grand Slam finals.

“There’s not much you can say,” Djokovic said. “All the superlatives that you can use, he deserves them.”

It’s the fourth time the No. 2-ranked Nadal won his favorite tournament without ceding a set and made his career mark at the French Open 100-2.

The 34-year-old left-hander from Spain has won his favorite event four straight times, following previous streaks of four from 2005-08, then five from 2010-14. Those go alongside four triumphs at the U.S. Open, two at Wimbledon and one at the Australian Open.

Bay Area TV Sports: What to watch this weekend

Nadal made clear that while he never has been consumed with the idea of catching Federer, he can appreciate the accomplishment’s significance.

“I would love to finish my career being the player with more Grand Slams. No doubt about that, no? But on the other hand, I say, ’OK, I have to do (it) my way. … I’m not going to be thinking all the time, ‘Novak (has) this one, Roger is winning the other one.’ You can’t be always unhappy because your neighbors have a bigger house than you or a bigger boat or have a better phone,” Nadal said.

“In terms of these records, of course I care. I am a big fan of the history of sport, in general. I respect, a lot, that,” he continued. “For me, (it) means a lot to share this number with Roger, no?”

Federer, 39, sat out the U.S. Open and French Open after two knee operations. He posted a congratulatory message on Instagram on Sunday.

“As my greatest rival over many years, I believe we have pushed each other to become better players,” Federer wrote, and ended with: “I hope 20 is just another step on the continuing journey for both of us. Well done, Rafa. You deserve it.”

No other …read more