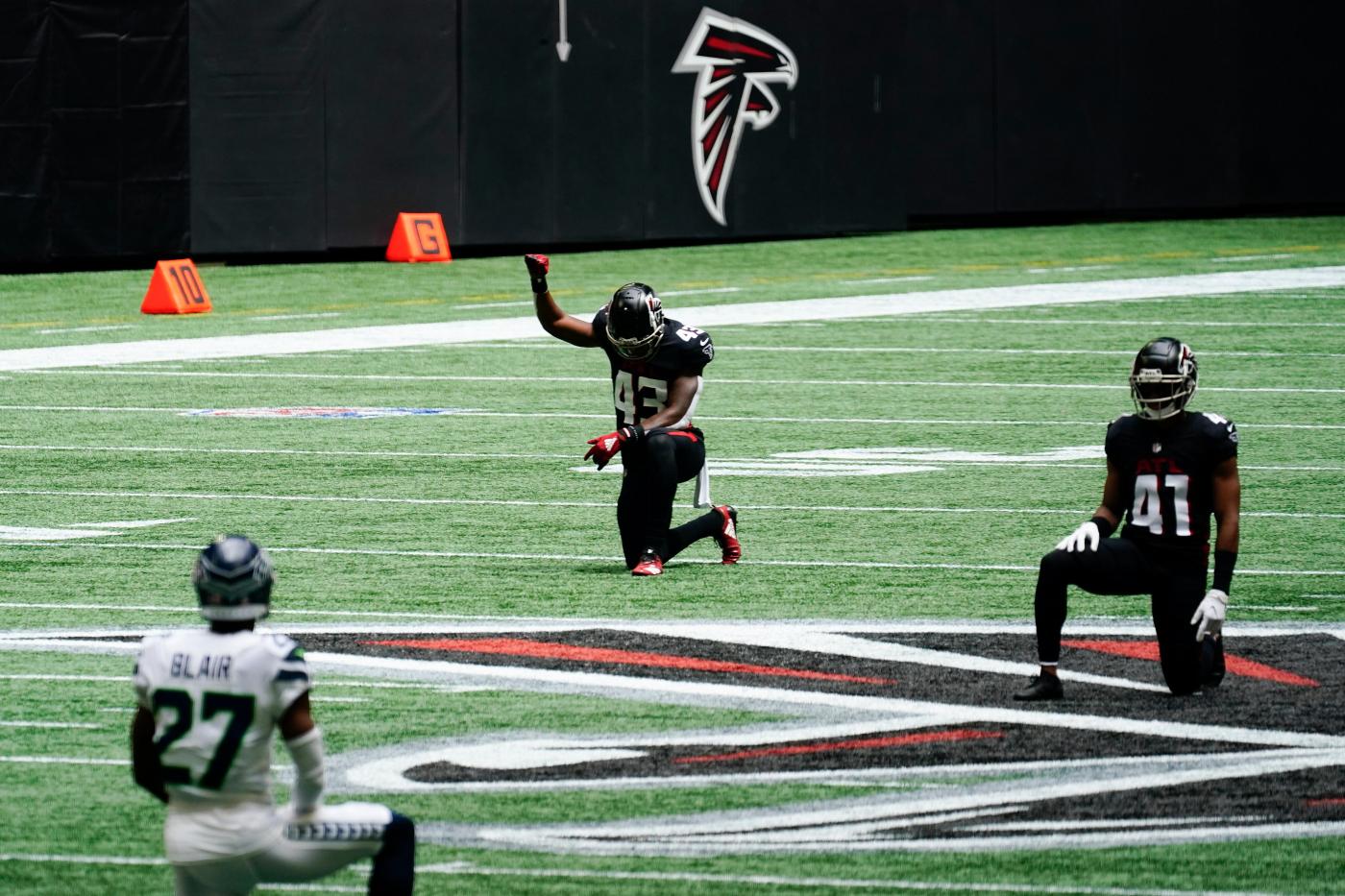 Seattle’s Jason Myers kicked the ball through the end zone to open Seattle’s season at Atlanta. No one else on the field moved.

Instead, the Seahawks and Falcons dropped to one knee where they had stood.

After years of pleading with their league to act against systemic racism, NFL players were prepared to wait another 10 seconds to make their point.

Teams opening their seasons in empty stadiums on Sunday knelt, locked arms, raised fists in protest or stayed off the field entirely for the “Star-Spangled Banner” and the Black anthem “Lift Every Voice and Sing” as the once-reluctant league brought racial injustice to the forefront on the NFL’s first full slate of games.

In Atlanta, the teams wore armbands honoring civil rights leader John Lewis and staged the most striking of the day’s gestures: They watched the opening kickoff sail through the end zone for a touchback, dropped to one knee, and remained there for about 10 seconds before trotting off the field to resume the game.

“We’re taking this moment and making it a movement, not just as a race, a community or a team, but as a nation,” Falcons defensive end Steven Means said in a statement issued by the team. “It’s time to stand up, rise up and vote.”

Lewis, the Georgia Congressman who died in July, was named an honorary captain for the game. The Falcons also wore shirts with his quote: “The Vote is the most powerful, nonviolent change agent you have in a democratic society.”

While fans were absent everywhere except Jacksonville because of the coronavirus pandemic, the Minnesota Vikings hosted the family of George Floyd, who died in May in a videotaped killing that sparked national protests over police brutality against Black men.

Vikings players locked arms in the end zone about a half-hour before their game against Green Bay for “Lift Every Voice and Sing,” the song unofficially known as the Black national anthem that was played before each game in Week 1 as part of the NFL’s social awakening.

Ten or so of Floyd’s relatives were then shown on the stadium video board from their perch in the upper concourse near the Gjallarhorn. The symbol of Norse mythology, which the Vikings took their name from, had been sounded before every game since 2007.

On Sunday, it remained silent.

How Broncos quarterbacks fared in their second year in the NFL

Is Broncos’ offensive line built for success, this year and beyond? 2020 will be a big litmus test.