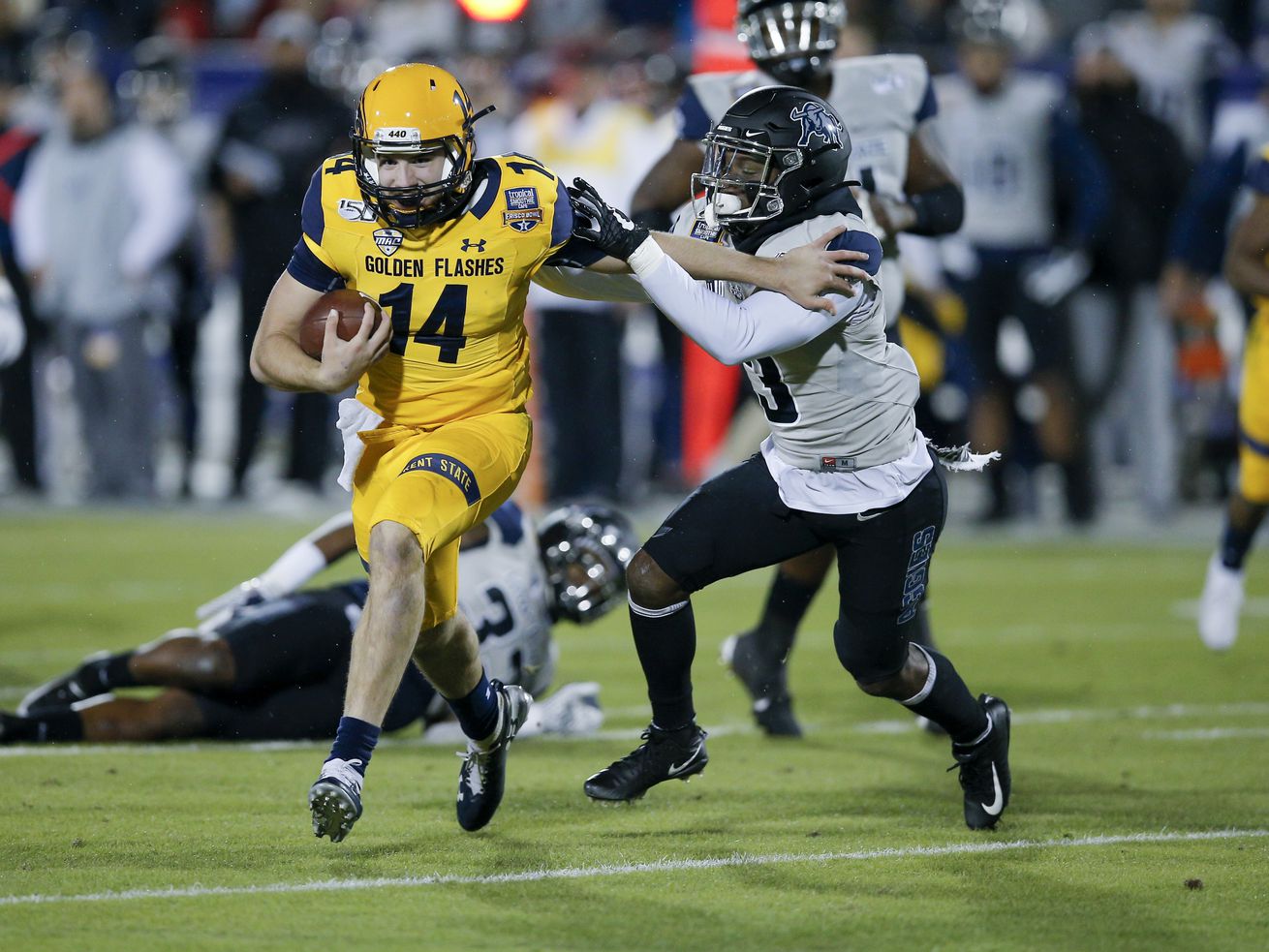 In this Dec. 20, 2019 file photo, Kent State quarterback Dustin Crum (14) carries the ball as Utah State safety Troy Lefeged Jr. (3) defends during the first half of the Frisco Bowl. It has been reported that Lefeged Jr. has entered the transfer portal. | Brandon Wade, AP

The Utah State Aggies have had a difficult season thus far.

The team’s 0-4 start is the program’s worst since 2007. Head coach Gary Andersen was fired as a result, and the quarterback he brought to Logan from the University of Utah — Jason Shelley — has since been dismissed from the team.

Then came an “upward trend” of positive COVID-19 cases within the program, a trend that necessitated the cancellation of this week’s game against rival Wyoming, and it is safe to say things are not going particularly well for USU football.

As of Thursday afternoon, one more thing can be added to that list.

According to reports by 247Sports and Rivals, safety Troy Lefeged Jr. has decided to explore his options away from Utah State and enter the transfer portal.

2019 JUCO signer Troy Lefeged has entered the portal as a grad transfer after totaling 103 tackles, 6 TFL, 4 PD and 2 FF in 2019 and 13 tackles this season at Utah State @rivalsmike @RivalsWoody https://t.co/RVow2C05rR

A native of Germantown, Maryland, Lefeged Jr. arrived at Utah State in 2019 as a JUCO transfer from Fullerton College in Fullerton, California.

In his first season as an Aggie, Lefeged Jr. was one of the program’s best defenders, totaling 103 tackles, six tackles for loss, four pass breakups and two forced fumbles.

Entering the 2020 season, Lefeged Jr. had NFL aspirations, legitimate ones, according to Andersen.

“He is a physical, tough-minded kid who is extremely smart, so he can do what we need done in that spot,” Utah State’s now former head coach told the Deseret News in March. “Troy is fearless. He’s a tremendous tackler, and he uses his physicality. He wants to be there, he wants to smack you every chance that he gets. He is becoming a student of the game, which is, quite frankly the next step for him in his development.”

Unfortunately for Lefeged Jr, he missed the season opener against Boise State and then, after playing in games against San Diego State and Nevada — he tallied a combined 13 total tackles in those losses — suffered an undisclosed season-ending injury.

“He had surgery this week, so he is out for the season,” Utah State interim head coach Frank Maile said.

With the latest reports, Lefeged Jr.’s Utah State career has likely come to an end as well.