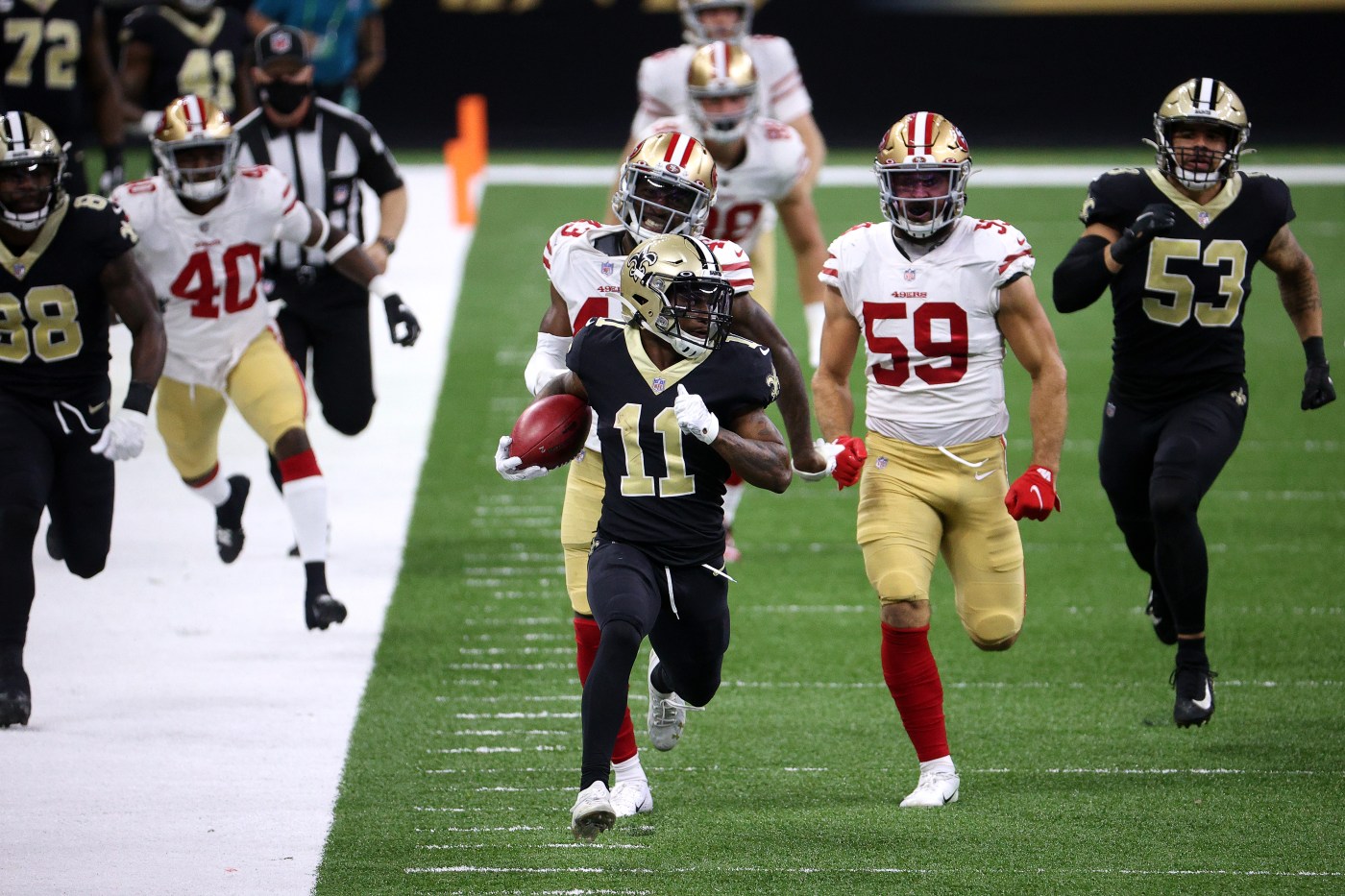 NEW ORLEANS — A 10-0 lead out the gate had the 49ers angling for a Superdome upset. They even had a live audience to fuel them for the first time this season.

Add in Drew Brees’ unexpected exit at halftime, because of a rib injury, and the 49ers should have been living it up in the Big Easy.

Instead, the 49ers muffed two punts, quarterback Nick Mullens struggled to revive the offense, and a short-handed team sustained its third straight loss, this time in 27-13 fashion to the NFC-leading Saints.

“I thought we had an opportunity today, big time,” coach Kyle Shanahan said. “We should have had the lead going into the second half. Couldn’t get anything going. Didn’t get much out of run game today and those (four) turnovers are what killed us.”

Mullens’ play will draw the most scrutiny because it comes with the  job description, and because of his two interceptions that foiled potential scoring drives.

Without a running game to assist him, and with so many first-string players out injured, the offense had little chance to keep pace with whoever the Saints played at quarterback, and that included Brees, super-sub Taysom Hill and second-half starter Jameis Winston.

“We blew an opportunity there,”  Shanahan added.

Muffed punts secured the 49ers’ demise, and those came after the Saints muffed a punt return in the first quarter to spark the day’s trend.

Here are the highs, lows and all you need to know:

No. 8 BYU football wants more games, but it could depend on where it lands in initial CFP rankings

RUN GAME GROUNDED: Jerick McKinnon had only 13 yards on his first 13 carries in a starting role likely to be reclaimed by Raheem Mostert after the bye. McKinnon averaged just 1.8 yards per carry (18 attempts, 33 yards).

Making matters worse, McKinnon’s pass protection faltered on multiple occasions, and he got hammered at the 14-yard line on a kickoff return.

Even worse than all that, the 49ers lost another running back to injury: JaMycal Hasty’s rookie season may have ended with 10:32 remaining in the game when he injured his left shoulder area. He’d gotten tackled for a 5-yard loss after catching a checkdown pass from Mullens.

A third-down lollipop got picked off by safety Malcolm Jenkins to spoil a third-quarter drive in Saints’ territory. It was heralded as the Saints’ play-of-the-game on their postgame video screens.

Mullens’ grand finale was a fade pass to Kendrick Bourne that got picked off in the end zone by Patrick Robinson with 2:25 left.

Mullens had multiple passes batted down at the line, and he finished 24-of-38 for 247 yards with a touchdown and a 68.6 rating. Hindered by a quadriceps injury, Mullens came out for one play, the last of the third quarter as C.J. Beathard replaced him and underthrew Richie James on a deep route.

Why did the Nuggets bet big on R.J. Hampton? Because “he’s going to be an All-Star”