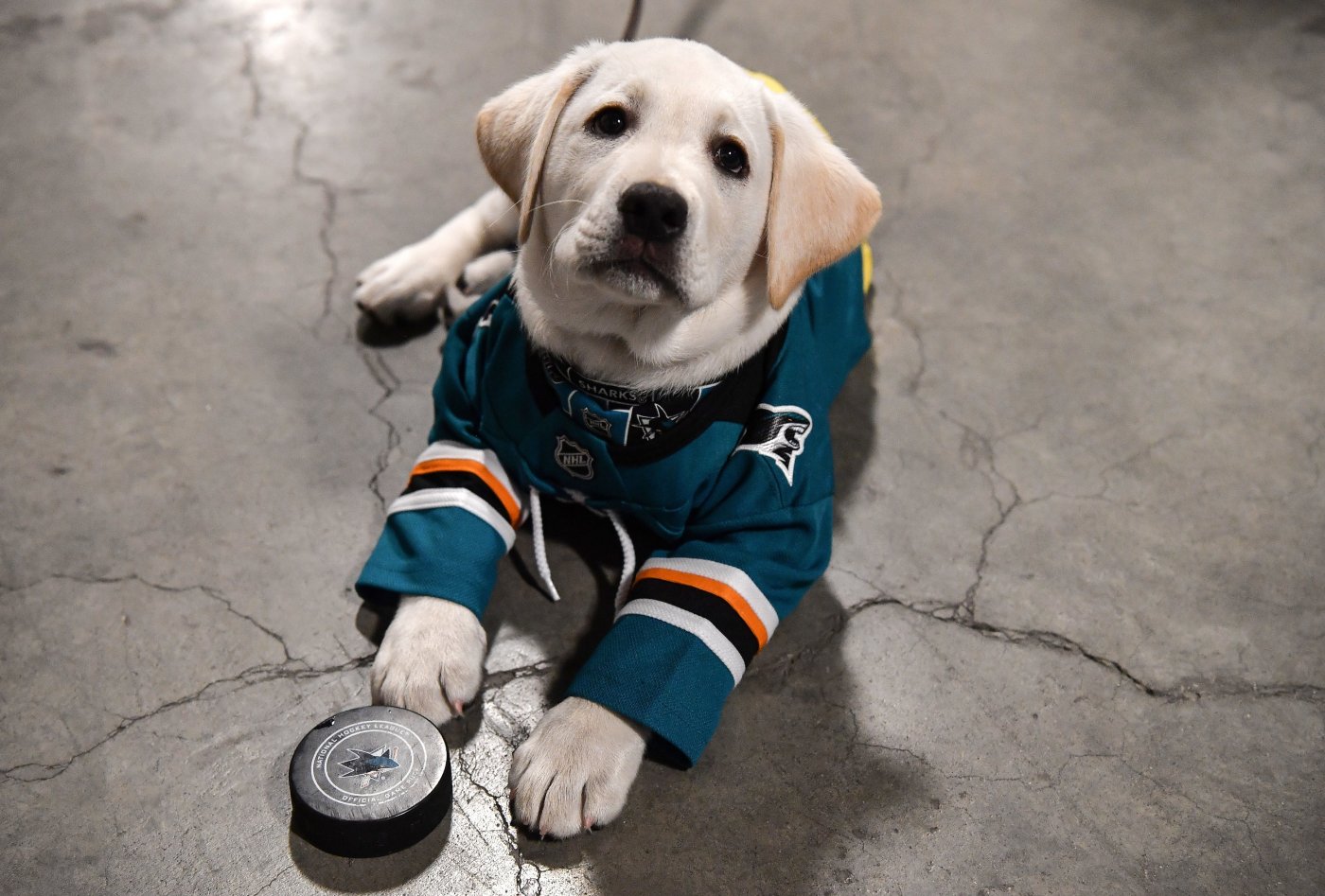 For nearly two years, San Jose Sharks fans have gladly had their hearts stolen by Finn, the adorable Yellow Labrador the NHL team sponsored for training with Canine Companions for Independence. Now, Team Teal will likely have their hearts broken by his departure. First, we lose Pavelski and Jumbo, and now Finn? It’s a sad day at SAP Center for sure.

The pup is leaving San Jose for his next level of training this year at Canine Companions’ Northwest Training Center in Santa Rosa, where he’ll learn to pick up items, open and close doors and develop other skills needed to be a service dog. No doubt his noble calling will make his leaving easier to take. It’s not like he just opted for a better contract with the Anaheim Ducks or something.

Still, it’s gonna take some getting over. Pre-pandemic, Finn made appearances at Sharks games and events like Sharks FanFest. Videos and photos were posted of him hanging out in the locker room, playing with his buddy Marc-Edouard Vlasic, meeting fans or strutting his stuff around the concourse at SAP Center. With no real opportunity to bid farewell to him at a game right now, fans wished the pooch well on social media, and even S.J. Sharkie — who now can firmly re-establish himself as the team’s most adorable mascot — congratulated him on making it to the next level.

On Finn’s official Twitter account Monday, the pup “posted” that he “had the bestest time being the Sharks hockey pup” and considered himself the “luckiest pup ever to have met all my hockey frens.” We’ll always have Twitter, Finn.

CELEBRATING BLACK HISTORY:  This week, History San Jose is hosting an online screening of the documentary, “A Place at the Table: Black Pioneers of Silicon Valley,” which highlights how both corporate leaders and Historically Black Colleges and Universities prepared that community to become leaders in technology at a time when patents and intellectual property rights didn’t protect their work.

The screening Thursday will be followed by a Q&A with filmmaker Kathy Cotton, who worked at several Silicon Valley startups before landing at Hewlett Packard. She left HP to start a consulting firm and developed her videography skills at the Digital Media Academy held at Stanford. She spent two year making “A Place at the Table,” which was screened in 2019 at eh San Francisco Black Film Festival. Tickets for the 6 p.m. event are available for $7 at historysanjose.org, but History San Jose and  African American Heritage House members can sign-up for free.

Meanwhile, the Los Altos History Museum will host an online Black History Month event this week, with historian Jan Batiste Adkins sharing some of the stories from her book, “African Americans of San Jose and Santa Clara County,” in a Zoom talk on Wednesday. That history goes back a long way, Adkins notes, beginning with people of African descent who arrived with the Spaniards in 1777 to create what was then known as …read more