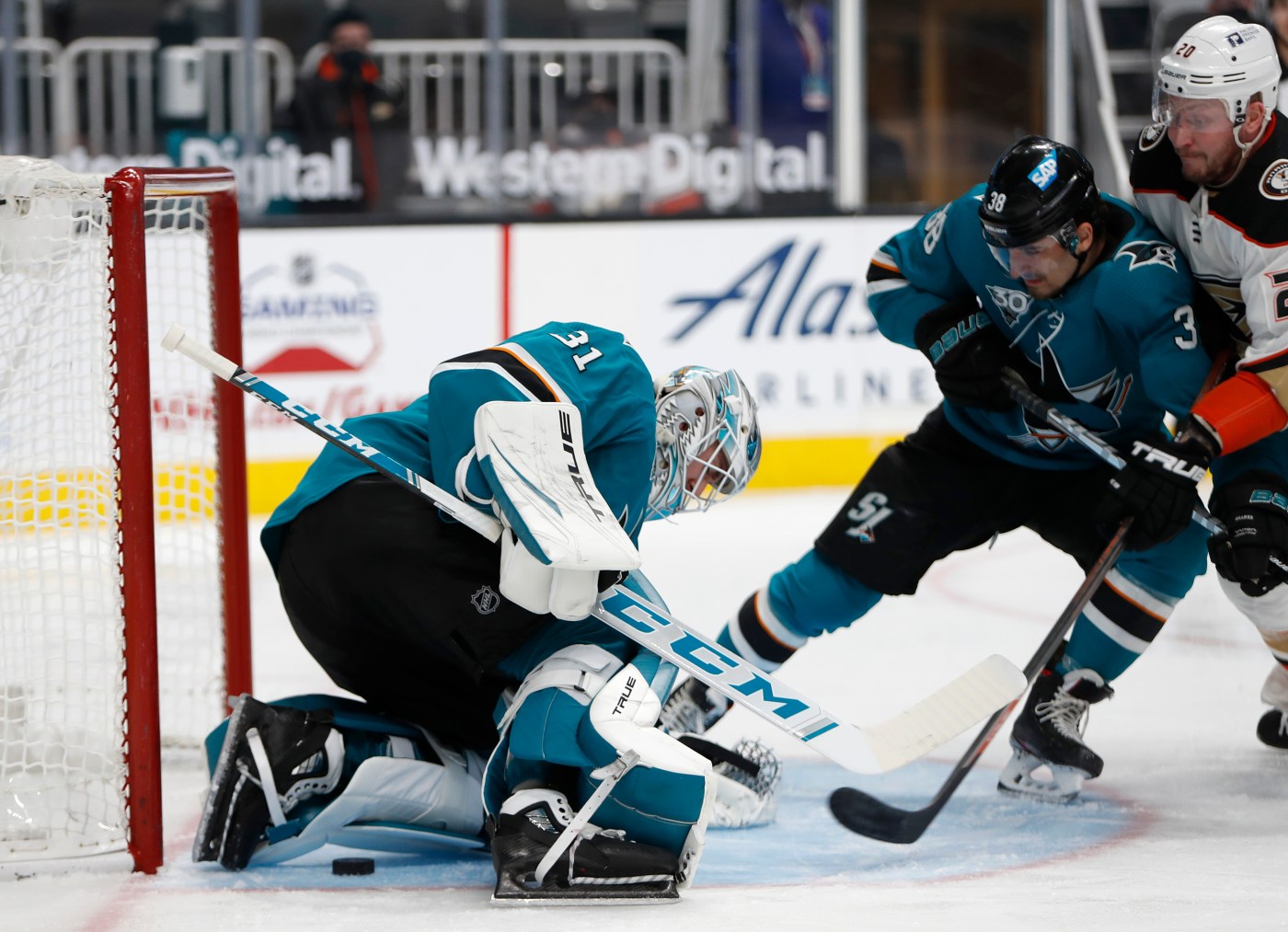 SAN JOSE — Things just felt a little off for the Sharks on Tuesday night — even before the start of the first period of their game with the Anaheim Ducks at SAP Center.

Only four Sharks skaters lined up on the blue line for the national anthem instead of the normal five, even though the usual number of players, 14, were on the team’s bench. Then, just a few seconds before puck drop, Mario Ferraro hopped on to the ice to take his usual place alongside Brent Burns.

The Sharks never found much of a rhythm once the game started, either, allowing a goal less than six minutes into the first period and three more in the second in a 5-1 loss to the Ducks that snapped their four-game winning streak.

Patrick Marleau scored a power-play goal at the 1:29 mark of the second period to cut Anaheim’s lead to 2-1. But the Ducks responded with goals from Isac Lundestrom and Nicolas Deslauriers later in the second as the Sharks wasted an opportunity to make up ground on the idle Arizona Coyotes for the fourth and final playoff spot in the West Division.

Goalie Martin Jones, who led the Sharks to all four of their wins last week, allowed four goals on 23 shots in the first two periods. Ducks goalie John Gibson had 22 saves through two periods and finished with 34.

Sharks winger Marcus Sorensen was a surprise scratch for the game, as he was replaced by Noah Gregor on the fourth line with Marleau and Jeffrey Viel. That line was on the ice for Adam Henrique’s goal at the 5:55 mark of the first period and Lundestrom’s goal at the 2:44 mark of the second.

Viel fought Anaheim’s Sam Carrick at the 13:51 mark of the first period.

Sorensen, set to become an unrestricted free agent this summer, has been mentioned in trade rumors in recent week, but nothing transpired Tuesday. The NHL’s trade deadline is next Monday.

Marleau’s goal came on the power play, as he took a pass from Erik Karlsson on the flank and scored into almost an empty net with Gibson out of position. It was Marleau’s third goal of the season and the 565th of his NHL career, moving him past Mats Sundin and Joe Nieuwendyk for 23rd on the all-time goal-scoring list.

The Sharks entered Tuesday with a combined record of 9-1-1 against the Ducks and Los Angeles Kings, the eighth and seventh-place teams in the West Division, respectively. The Sharks have won four straight games against the Kings, including two games at Staples Center on Friday and Saturday of last week.

This is the time for the Sharks to make a move. After they host Los Angeles on Friday and Saturday of this week, they play the Ducks again on April 12 and 14. Following this …read more