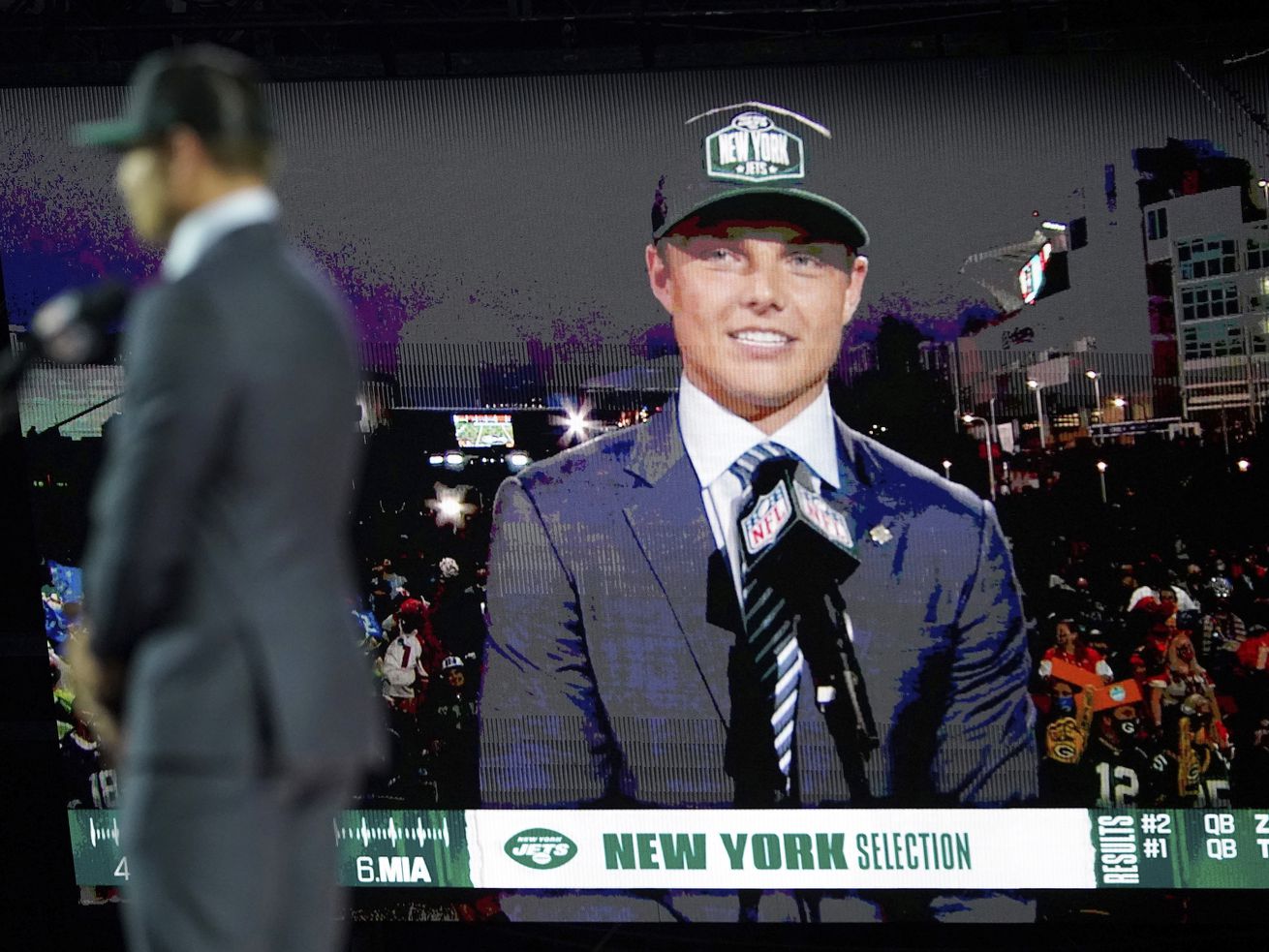 New York Jets’ first round draft choice, Zach Wilson is interviewed on stage during the first round the the NFL Draft, Saturday, April 29, 2021 in Cleveland. Wilson joined the Jets as the No. 2 draft pick of the 2021 NFL draft. | Doug Benc, Associated Press

Once upon a time, seemingly ages ago, the first college recruiter to offer Zach Wilson — now the New York Jets’ No. 2 first-round pick — saw two things in a young, skinny kid.

On Thursday night in Cleveland, Fesi joined a select group of Wilson’s family members, friends and coaches to witness firsthand as the Jets made Wilson the highest-drafted BYU football player in history.

Did Sitake, now BYU’s pass game coordinator, have any idea years ago that day would come and he’d be present as a first-row witness?

Such a special day for this guy. So blessed to witness such a big moment in his life. Congrats ⁦@zachkapono1⁩. Love you big dog! pic.twitter.com/a6BTY4FTnu

“Not that he didn’t have the ability that he could someday to be there, but there’s just so much that goes into such a big accomplishment. All I thought about at the time was college — how can he be in college. That was the lens I was looking through. I thought he had the tools but there is so much and it is so hard to be projected to be the No. 2 pick overall. Zach will be the first to tell you that.

“A lot has to do with the surrounding cast, but he deserves it and it’s just crazy that it all happened. It came so quick. But no, I’d be lying if I said I knew he would be the second overall pick from whatever first impressions I had of him.”

Two things stood out to Sitake about Wilson back in the day, before he became a star at Corner Canyon High School and then BYU.

“First was his charisma, his personality and how much he loved football. Second, it was his sheer arm talent and what he could do throwing the football,” said Sitake.

Both of those Sitake judgments proved themselves this week when the pick by the Jets opened the door for Wilson to get generational money for being taken that high.

A night and call I will never forget. Thank you @NYJets! Can’t wait to get started. So blessed and thankful
J-E-T-S! Jets! Jets! Jets! pic.twitter.com/IWBRtge56w

Sitake received an invitation to be at a draft day party at the Wilson’s home in Draper. But when the NFL asked Wilson to be in Cleveland on draft day as part of the ABC/ESPN live broadcast, Sitake found himself on a plane, all …read more

Marvel Studios & Disney+ | SUPER BOWL 2021 | Promo
Sports on the air: Here’s what games are on TV and radio for the week of May 9-15
SHARES
ShareTweet