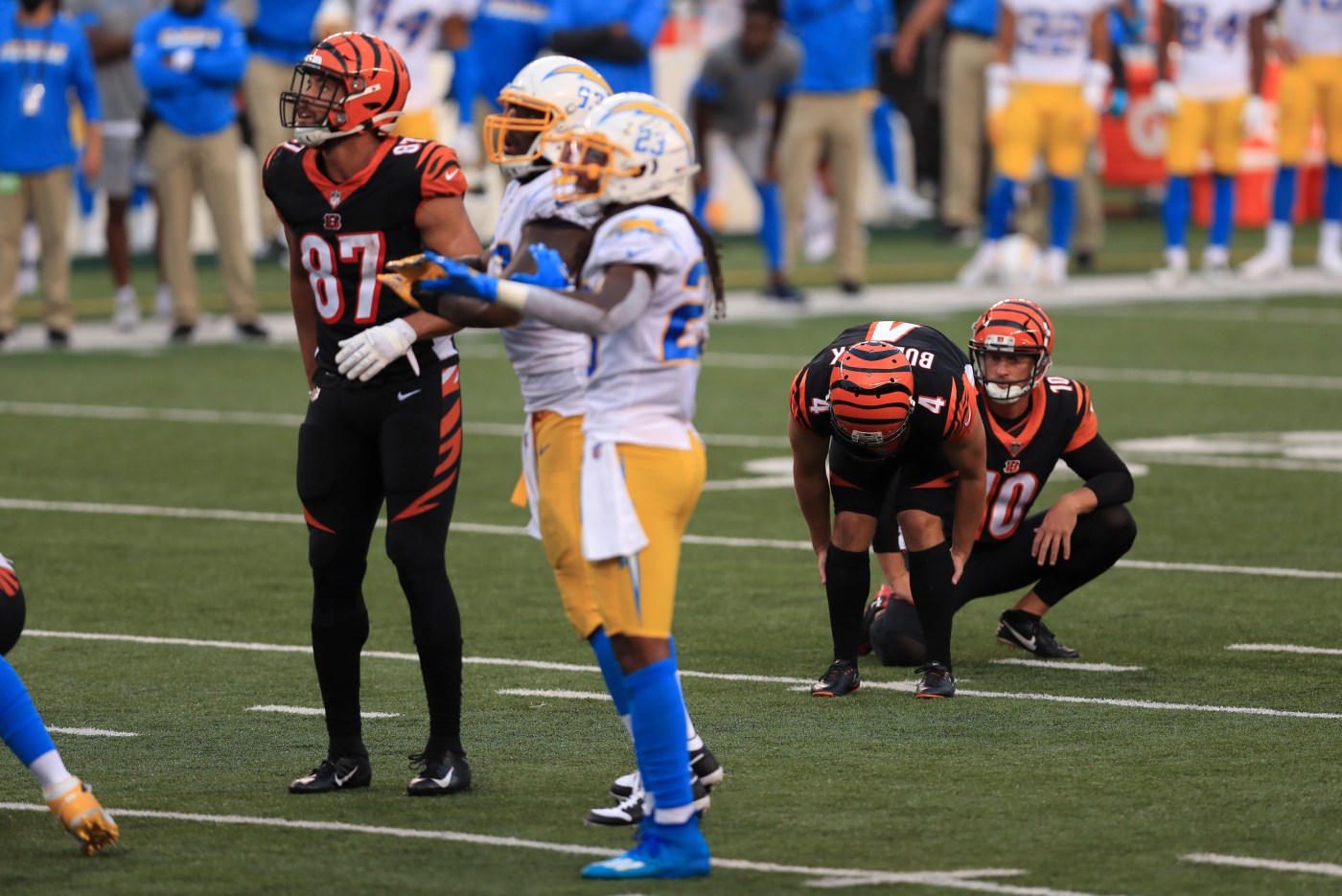 The Chargers and Bengals locked arms during the anthems at Paul Brown Stadium in Cincinnati Sunday.

Then the game started and they never did get untangled.

It was a microcosm of all the Game Ones you’ve seen when two representatives of the NFL’s mediocre middle get together. Lots of punts, lots of bogged-down third downs, strange coaching and officiating decisions, and finally a wide-right field goal try by Bengals kicker Randy Bullock, who grabbed his leg almost immediately. At least the jilted Cincinnati fans didn’t have to sit in traffic.

The difference was that the Chargers let someone else stub their toes, not that they were perfect or even prolific. But they made one or two fewer bad plays than the Bengals did, and who cared that they only scored one touchdown against last year’s 29th-ranked defense?

“It’s just so hard to win a game in this league,” linebacker Melvin Ingram said.

Charger fans know that. Many of them must have felt a burning urge to go outside and water the flowers when Joe Burrow, the first-overall draft pick, began herding Cincinnati down the field with no time outs.

From his own 18 to the Chargers’ three, Burrow was 9-for-11. Then A.J  Green pushed Casey Hayward and got whistled for offensive interference on what should have been a game-winning score.

That moved the ball back to the 13 and seemed to delay the Chargers’ fate at least until overtime.

Then Bullock got lost in the goalpost shadows that have swallowed up so many Chargers’ kickers in the recent past.

Once Burrow realized his new offensive line wasn’t as good as his old one from LSU, he quickened his release and found some rhythm. A 66.0 passer rating did not really tell his story.

“He showed everyone why he was picked No. 1 in the draft,” Ingram said. “What surprised me was the way he was able to make so many poised plays out there.”

Burrow shook off an early pass-rush pounding to score on a clever, 23-yard quarterback draw. But one flustered play damaged the Bengals.

Right after coach Zac Taylor had spent the final time out, Burrow tried to set up a screen to his left. The Chargers reacted quickly, and Burrow tried a hopeless shovel pass that was absorbed by Melvin Ingram.

“I just made too many mistakes to win the game,” said Burrow, who was named captain of the team before his first professional snap, which tells a lot about (1) his own qualities and (2) the void into which he was summoned.

“I can’t throw that interception in that situation,” he said.

Now the Chargers had a 3-point lead and the game on their racket. But Cincinnati stopped Joshua Kelley on third down and earned their final chance.

“We left plays out on the field,” said Tyrod Taylor, the Chargers’ QB. “You have to pick up a third-and-one in that situation.”

Taylor also came up short on two fourth down tries, ones that weren’t well-advised, considering how the Chargers could …read more