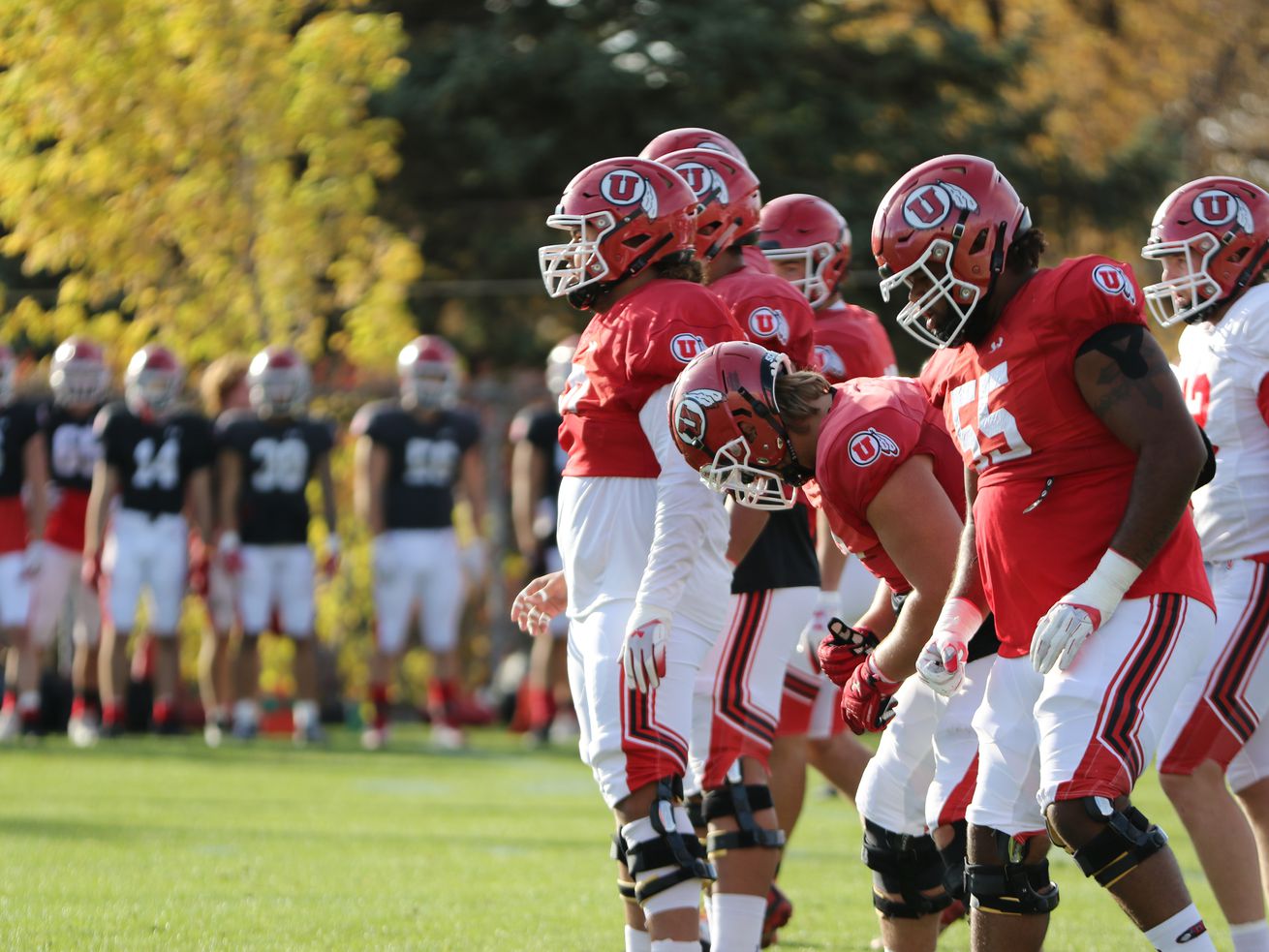 Utah offensive linemen prepare for play during Wednesday’s practice. It was the first day players could gear up in full pads. | Utah Athletics

The quarterbacks — Jake Bentley, Drew Lisk and Cam Rising — have been put through some live work. Whittingham announced earlier in the week that a pecking order would not be made public.

Whittingham did say, however, that Devin Brumfield and Jordan Wilmore were the top guys at running back with freshman Ty Jordan also having a role. Viane Moala is the leader at defensive tackle. Hauati Pututau is also doing a nice job, as are freshmen Tennessee Pututau and Tanoa Togiai. JaTravis Broughton is emerging as the top cornerback.

The plan was to back off the physicality Friday in preparation for Saturday’s scrimmage. Whittingham noted the importance of the latter, as well as the scrimmage set for the following week.

Whittingham said the two scrimmages will be a big determining factor in the two-deep and determining the travel roster.

The Utes have practiced six times before scheduled sessions on Friday and Saturday. They have 17 more before opening the season Nov. 7 against Arizona.

“The clock is ticking,” Whittingham said.

When it comes to positions, he listed the secondary as first and foremost in terms of getting a firmer grasp on things. The quarterbacks, running backs and the starting linebacker position opposite Devin Lloyd were also mentioned. So, too, were the kicking spots.

BYU football: No. 10/11 Cougars to focus on improvement, depth as another heavy underdog visits on Saturday

“Those guys were really good, but you know, you always got guys to step in spots,” Umana said. “So we always say next man up over here. So I can’t wait to see who is the next man up.”

THE PANDEMIC: Brumfield, a junior from Covington, Louisiana, didn’t spend a lot of time at home in the offseason. The state has been a hotspot for the coronavirus.

“I went back home for a brief period, probably no more than a week just to see family,” Brumfield said. “But I made sure I got back out here where I knew I would be safe and around the best doctors I could be around to make sure that I was in the right position to get prepared.”

Brumfield said the coronavirus pandemic is “pretty bad” back home, but “things have slowed down a little bit.”