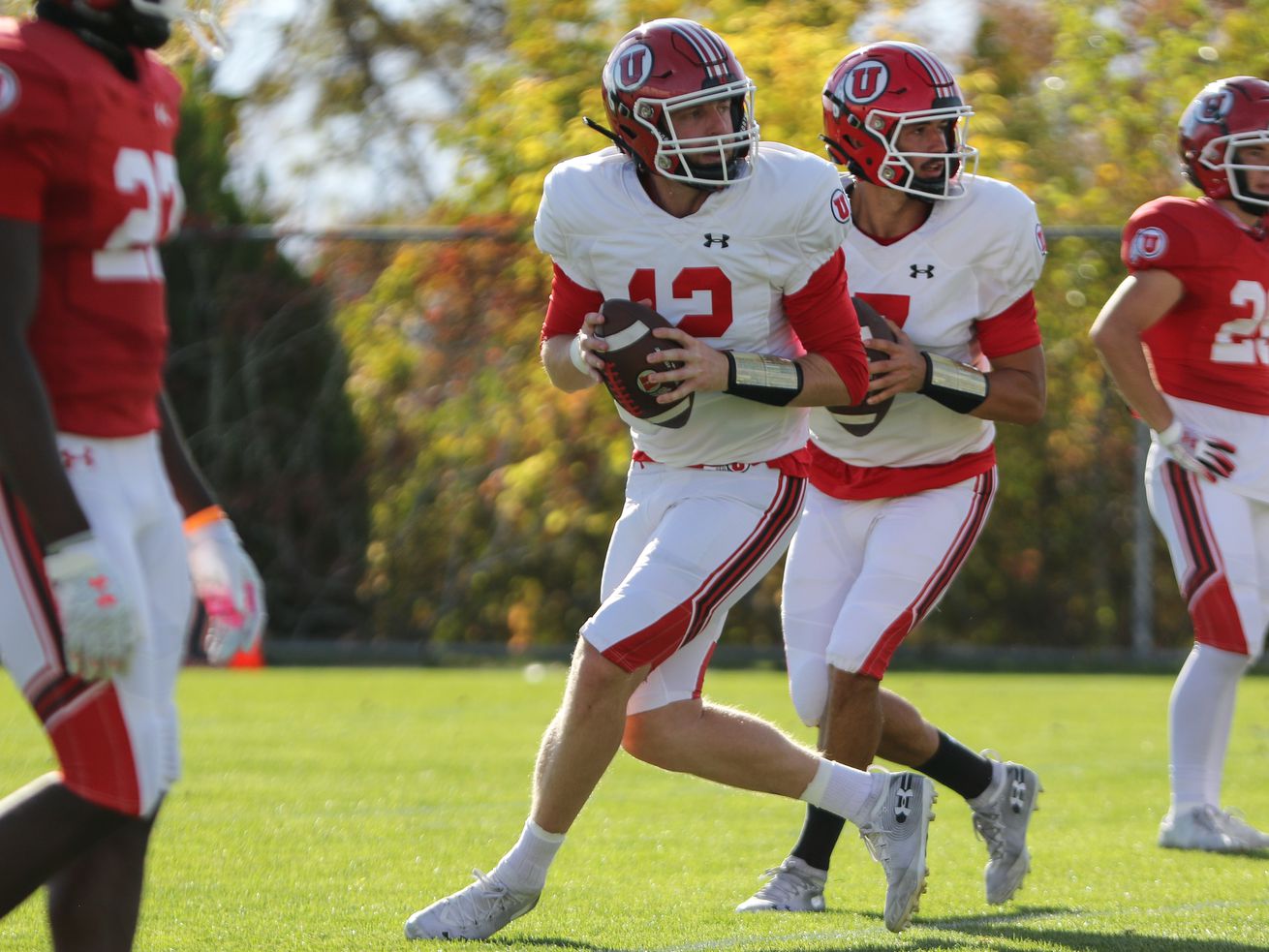 Utah quarterbacks, Drew Lisk, left, and Cam Rising work on their drops Wednesday during the first day in which players could be fully padded. Lisk, who played his high school ball at Jordan High, is among three QBs battling for the starting job. | Utah Athletics

Although not as high profile as the other two QBs vying for the position, the former Jordan High star knows wherever he lands in the pecking order, he’ll need to be ready

For the last few months, ever since the Utah football team concluded its 2019 season with a loss to Texas in the Alamo Bowl, the big question on Utes fans’ minds has been who will be the team’s next quarterback, Jake Bentley or Cameron Rising.

It’s very likely one of those two will emerge as the starting quarterback, perhaps as early as next week, although coach Kyle Whittingham said he may not announce a starter until just before the opening game against Arizona Nov. 7.

What about local product Drew Lisk, who has been with the program for four years and knows the Utah offense as well as any of the quarterback candidates?

For right now, anyway, Lisk is listed on the same level as both Bentley and Rising, according to Utes coaches.

“He’s getting the same amount of reps as the others at this point in time,” said Whittingham, who insisted Wednesday that Lisk wasn’t out of the running, adding, however, “That will change, he’ll either get more or less (reps) depending on where he ends up in the pecking order.”

Lisk has been an afterthought by many fans since joining the Utah program in 2016 after an outstanding prep career at Jordan High, where he led the state in total offense with 4,706 yards as a senior. He also played basketball and was an all-state baseball player for the Beetdiggers.

He redshirted his first year, and the following year he got some mop-up duty at the Heart of Dallas Bowl and earned a scholarship the following summer. He played in just one game in 2018, against Colorado.

Then last year, he surprised a lot of folks by earning the No. 2 spot behind Tyler Huntley and ahead of Jason Shelley, who had taken over for Huntley late the previous season when Huntley was injured.

Lisk played in four games in 2019, including a 6-for-6 passing performance against Idaho State.

As a former walk-on, Lisk doesn’t have the credentials of Bentley, a highly-recruited quarterback out of high school who started 33 games in the SEC while playing for South Carolina, or Rising, who was also highly recruited before landing at Texas.

Lisk knows this, but is still battling to be No. 1 and at least be ready …read more