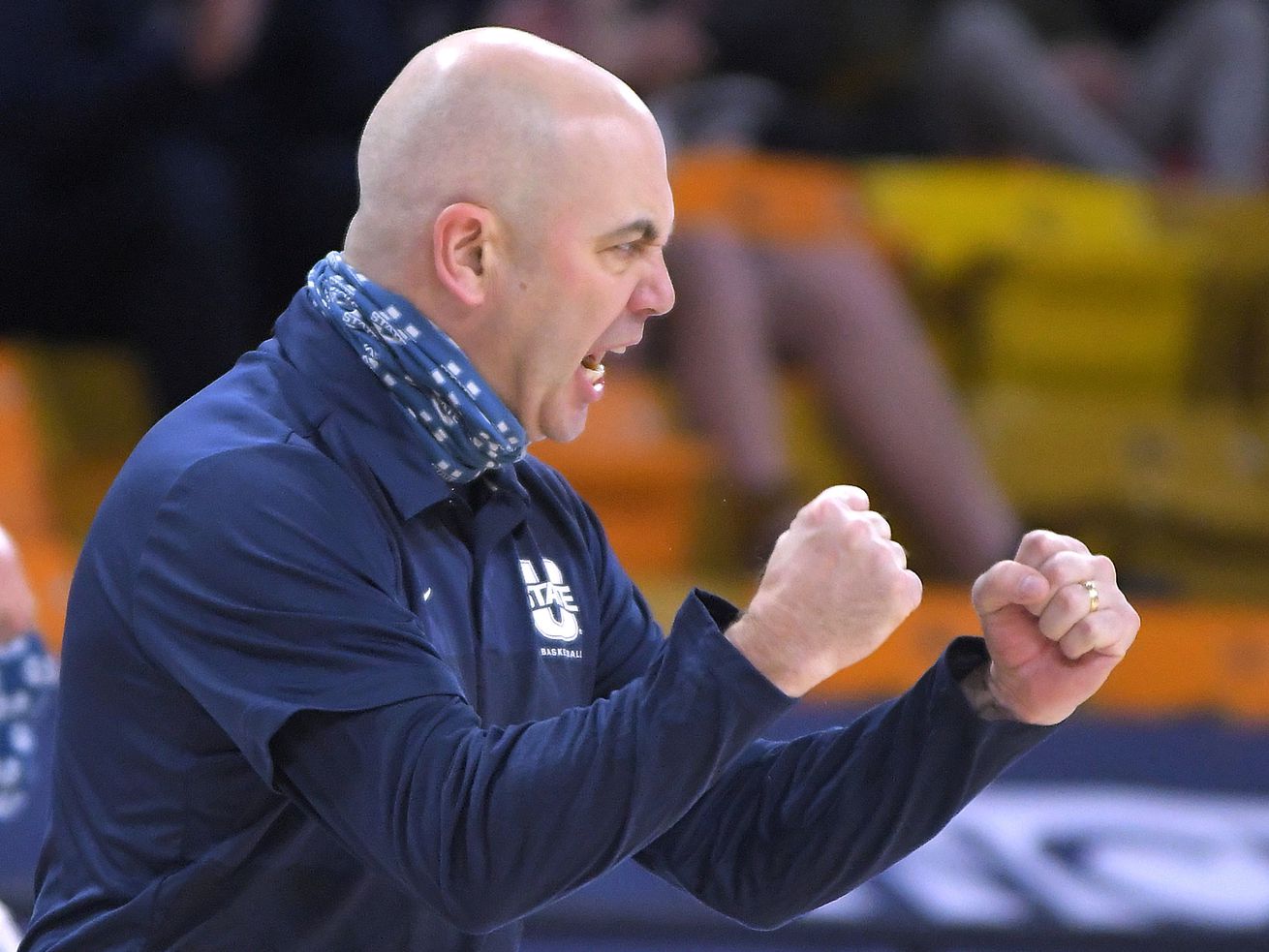 Utah State coach Craig Smith celebrates after the team scored a basket during the second half of an NCAA college basketball game against San Jose State on Wednesday, Dec. 23, 2020, in Logan, Utah. | Eli Lucero/The Herald Journal via AP, Pool

Week 9 of the college basketball season is set up to be a crucial one for several Division I Utah teams, particularly on the men’s side.

Here’s a look at the schedule, plus three national games with significant implications:

Utah men’s basketball vs. Stanford, 3 p.m. MST (ESPN2)
The Utes have played some good first halves lately, but need to string together a full game to snap their four-game losing skid. The Cardinal come to Salt Lake City on a three-game winning streak, albeit all against teams in the bottom half of the Pac-12 standings.

Utah State men’s basketball vs. San Diego State, 7 p.m. (CBS Sports Network)
The Aggies’ two games at home against SDSU this weekend will have a big impact on the Mountain West Conference standings. USU has roared out to a 6-0 start in MWC play as part of an eight-game win streak, though the three teams the Aggies have beaten in league play have a combined one conference win. The defending MWC regular-season champ Aztecs dropped a game to Colorado State, when the Rams rallied from 26 down, but are talented and were ranked earlier this year.

Avalanche falls to 3-3 with 3-1 loss at Anaheim

BYU men’s basketball at Saint Mary’s, 9 p.m. (ESPN2)
The Cougars historically have had a tough time winning at Saint Mary’s, and this game will help gauge where BYU sits in the conference race. Both teams are searching for their first West Coast Conference win after COVID-19 postponements have interrupted their play the past two weeks.

Utah women’s basketball vs. No. 1 Stanford, 1:30 p.m. (Pac-12 Networks)
The Utes have had a rough go of it since beating Oregon State in the season’s second game and enter the matchup with the nation’s No. 1 team with a 2-7 Pac-12 record. The Cardinal are winning games by an average of 31 points per game and will test the young Utah squad.
UVU women’s basketball vs. Seattle, 5:30 p.m. (WAC Digital Network)

Dixie State men’s basketball at UT Rio Grande Valley, 6 p.m. (WAC Digital Network)
The Trailblazers’ Western Athletic Conference opener was delayed because of COVID-19 issues, but Dixie State, which lost 72-63 to New Mexico on Wednesday in a quickly scheduled matchup, will have the chance to pick up a league win or two when it heads to Texas for a pair of games against the Vaqueros.
UVU men’s basketball at Seattle, 7 p.m. (WAC Digital Network)

'You shouldn't be calling yourself a Ranger': Tom Cotton's military service is under scrutiny from a fellow Army veteran in Congress